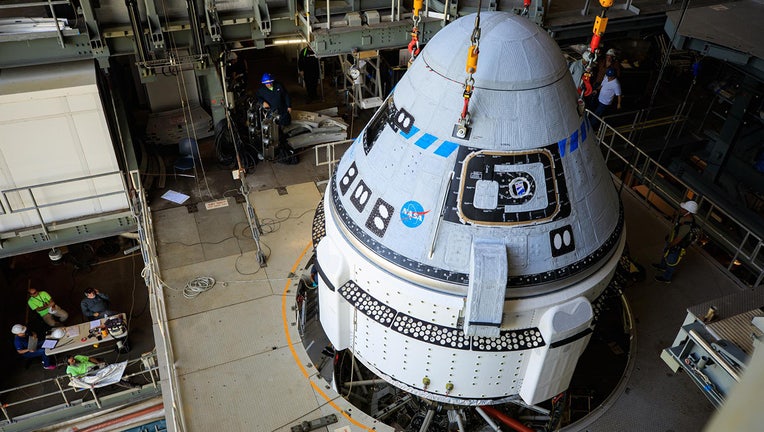 The Boeing CST-100 Starliner spacecraft is lifted at the Vertical Integration Facility at Space Launch Complex-41 at Cape Canaveral Space Force Station in Florida on May 4, 2022, ahead of its second Orbital Flight Test (OFT-2) to the International Sp

CAPE CANAVERAL, Fla. - Boeing’s first spaceflight with astronauts has been delayed until next year because of repairs that need to be made to the capsule following its last test flight.

Liftoff of the Starliner capsule with a pair of NASA test pilots is now scheduled for February, officials announced Thursday. They had hoped to launch it by year's end.

Boeing has launched Starliner twice without a crew, most recently in May. The capsule managed to dock with the International Space Station on the second go-around, despite thruster and other problems. Boeing program manager Mark Nappi said these issues need to be fixed before two NASA astronauts climb aboard, as early as February.

Some of the thruster trouble is believed to have been caused by debris. Because that part of the capsule was ditched before touchdown, "we will never know exactly what was the issue," Nappi told reporters.

The Atlas V begins to lift off from Pad 41, starting the OFT-2 mission. (FOX photo)

Boeing already was trailing SpaceX, NASA's other contracted taxi service, by the time the Starliner made its debut in 2019. The capsule's initial test flight with a mannequin was cut short by a string of software problems, prompting this year's do-over.

RELATED: What are all those black and white dots on NASA's Artemis I rocket?

SpaceX is gearing up for its sixth crew flight for NASA. Liftoff has been bumped to the beginning of October because of all the traffic at the space station.