PHOENIX - Among the people charged with seditious conspiracy in connection with the violent 2021 U.S. Capitol Insurrection is a 63-year-old Phoenix man.

On Jan. 13, it was reported that Stewart Rhodes, the founder and leader of the far-right Oath Keepers militia group, and 10 other members or associates, have been charged with seditious conspiracy in the violent attack on the U.S. Capitol.

The Phoenix man who has been charged along with Rhodes and others has been identified as Edward Vallejo. Vallejo, along with Rhodes, were arrested on the same day. The nine others were already facing criminal charges related to the attack.

Authorities say those charged in the plot discussed their plans in encrypted chats, traveled to the nation’s capital from across the country, organized into teams, used military tactics, stashed weapons in case they felt they were needed and communicated with each other during the riot on Jan. 6, 2021.

Accused Arizona man to be jailed until trial

U.S. Magistrate Judge John Boyle concluded Edward Vallejo, 63, posed a danger to the community. The judge said Vallejo has made incendiary comments about violence since the riot, rejected his attorney’s claim that Vallejo was a minor player in the alleged plot and noted that there was no evidence showing he was remorseful for his actions.

Prosecutors say Vallejo coordinated "quick reaction force" teams that kept guns at a hotel in nearby Arlington, Virginia, and were prepared to bring the weapons into Washington if Oath Keepers founder Stewart Rhodes or associates believed the need arose. They say Vallejo, in the end, wasn’t called to transport the guns into Washington.

"If Mr. Rhodes had given that order, you would have complied," Boyle said during the court hearing.

As the riot was unfolding in Washington, Vallejo sent a message on a chat saying, "QRF (quick reaction force) standing by at hotel. Just say the word."

During the riot, prosecutor say Vallejo also tried unsuccessfully to launch a drone to use for reconnaissance.

Authorities say Vallejo, Rhodes and others met at a restaurant in Vienna, Virginia, on the evening of Jan. 6 to celebrate the attack on the Capitol.

Vallejo’s attorney, Debbie Jang, said her client didn’t pose a danger to the community. She said Vallejo served in the U.S. Army in the late 1970s, works with a group that helps veterans and doesn’t have a criminal record.

Despite hundreds of charges already brought in the year since pro-Trump rioters stormed the Capitol in an effort to stop the certification of President Joe Biden's 2020 election victory, these were the first seditious conspiracy charges levied in connection with the attack on Jan. 6, 2021, marking a serious escalation in the largest investigation in the Justice Department’s history.

The charges rebut, in part, the growing chorus of Republican lawmakers who have publicly challenged the seriousness of the insurrection, arguing that since no one had been charged yet with sedition or treason, it could not have been so violent.

According to the Cornell Law School's Legal Information Institute, seditious conspiracy, as defined by 18 U.S. Code § 2384, is defined as follows:

Suspects discussed overturning election results for weeks, according to indictment

The indictment alleges Oath Keepers for weeks discussed trying to overturn the election results and preparing for a siege by purchasing weapons and setting up battle plans. They repeatedly wrote in chats about the prospect of violence and the need, as Rhodes allegedly wrote in one text, "to scare the s—-out of" Congress. And on Jan. 6, the indictment alleges, they entered the Capitol building with the large crowds of rioters who stormed past police barriers and smashed windows, injuring dozens of officers and sending lawmakers running.

Authorities have said the Oath Keepers and their associates worked as if they were going to war, discussing weapons and training. Days before the attack, one defendant suggested in a text message getting a boat to ferry weapons across the Potomac River to their "waiting arms," prosecutors say.

On Jan. 6, several members, wearing camouflaged combat attire, were seen on camera shouldering their way through the crowd and into the Capitol in a military-style stack formation, authorities say.

The indictment against Rhodes alleges Oath Keepers formed two teams, or "stacks," that entered the Capitol. The first stack split up inside the building to separately go after the House and Senate. The second stack confronted officers inside the Capitol Rotunda, the indictment said. Outside Washington, the indictment alleges, the Oath Keepers had stationed two "quick reaction forces" that had guns "in support of their plot to stop the lawful transfer of power."

Prosecutors say images from a new court filing show Vallejo bringing weapons, ammunition, and 30 days of supplies to a hotel in Virginia.

Court documents showed that on the morning of the Capitol riot and the day after, Vallejo spoke on a podcast where he discussed plans for a so-called recon mission to case the perimeter being set after the insurrection.

Vallejo also said that he was "never done and was "waiting for orders from Steward Rhodes."

Prosecutors say that since Vallejo has not renounced violence or his belief in the necessity of guerrilla warfare, he should not be released from custody because he is a danger to public safety.

A hearing is scheduled to take place on Jan. 20. 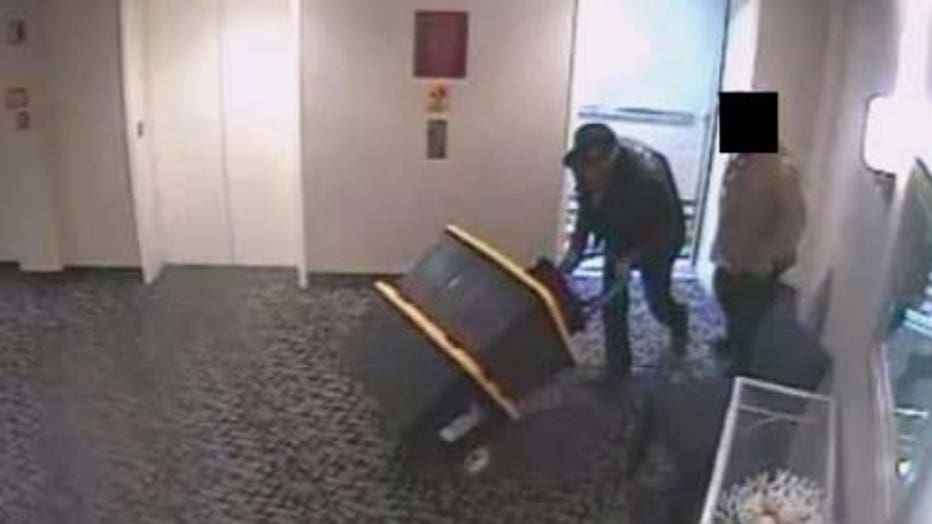 Prosecutors say images from a new court filing show Edward Vallejo bringing weapons, ammunition, and 30 days of supplies to a hotel in Virginia.

"I think it's extremely serious. Not many people in the history of this country have ever been charged with sedition.," said Swecker.

According to the FBI, Vallejo was part of a so-called "Quick Respose Force Team" to transport weapons.

Investigators say the Oath Keepers focus on recruiting current and former military, law enforcement and first-responder personnel. After the attack on the Capitol. documents show Rhodes, Vallejo and another Oath Keeper celebrated and discussed next steps. According to court documents, Vallejo messaged other members, saying they would be back at 6am to do it again.

"We have only begun to fight," Vallejo allegedly typed in the message.

Sedition charges are difficult to win and rarely used, but defendants face steep prison time of 20 years if convicted, compared with five for the other conspiracy charges. The last time U.S. prosecutors brought such a seditious conspiracy case was in 2010 in an alleged Michigan plot by members of the Hutaree militia to incite an uprising against the government. But a judge ordered acquittals on the sedition conspiracy charges at a 2012 trial, saying prosecutors relied too much on hateful diatribes protected by the First Amendment and didn’t, as required, prove the accused ever had detailed plans for a rebellion.

Among the last successful convictions for seditious conspiracy stemmed from another, now largely forgotten storming of the Capitol in 1954, when four Puerto Rican nationalists opened fire on the House floor, wounding five representatives.

According to court documents, Edward Vallejo, along with far-right militia group Oath Keepers founder Stewart Rhodes and others, were charged with seditious conspiracy in connection with the deadly Jan. 6, 2021 riot. FOX 10's Justin Lum reports.