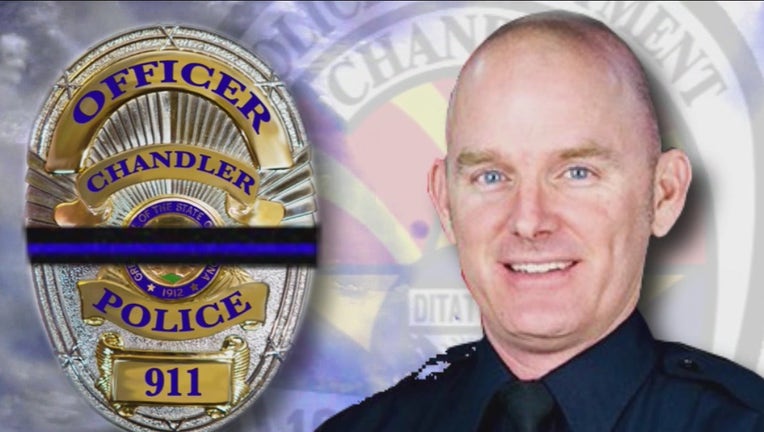 CHANDLER, Ariz. - As an investigation into an incident that led to the death of a Chandler Police officer continues, members of the community continue to mourn the death of Officer Chris Farrar.

Officer Farrar died following a chase that began on April 29. Gilbert Police and Pinal County Sheriff Mark Lamb said the pursuit began at about 10 p.m., when a sheriff's deputy tried to pull over a speeding vehicle near Eloy and then reported he'd been shot at.

The police chase ended up in Chandler Airport, where the suspect driver busted through one of the gates, causing the facility to briefly shut down.

Officials say the suspect then fled on foot and stole a truck from a Ford dealership at SanTan Motorplex, hitting two officers and one of the dealership janitors.

The other officer injured, identified as Gilbert Police officer Rico Aranda, is reportedly in critical but stable condition.

Officer Chris Farrar ate at May Rowden's Thai restaurant on April 29. Little did Rowden know that that was the last time the officer ate at her restaurant. FOX 10's Nicole Garcia reports.

"I’m just going to put flowers on it for him. Just a tribute. That's all I could do. Just a great guy, a great guy," said May Rowden, owner of Chon Thai Food.

Rowden won't let anyone sit at the table where Officer Farrar and his partner sat last night.

"At least I'm glad we could provide him a good meal," said Rowden. "I knew he got a full tummy because he couldn’t finish his soup. He said to me, I’m so full. I said, well you better not be sleeping in the car while you’re patrolling and working, but yeah, he was in a good spirit."

Last night, Rowden says she just learned his name. Prior to that, she had known Officer Farrar by his meal. On April 30, she read the news about a Chandler officer killed while on the job.

"When I saw his picture, I was like no, this can’t be real," said Rowden. "It was an hour after that he got killed. He just had dinner."

Rowden says in her view, kindness is the legacy that Officer Farrar will leave. On April 29, a couple dining at the restaurant told her they wanted to secretly pay for the officer’s meal.

"It was his last meal, and that's what touched me even more, is the kindness that goes around before he passed," said Rowden.

To many, Officer Chris Farrar, who died following an incident involving a pursuit that began in Eloy, left a legacy of kindness.

"An officer who cared about his community. He really was out there trying to make a difference," said Allen.

"My daughter's a doctor, and she and the other doctors have said without Chris being there, it would have been very limited." said Walsh

After the emergency, Officer Farrar visited Walsh multiple times to check on him, something Walsh never expected

"He just cared. He really did," said Walsh.

A candlelight vigil is set to be held at the Compass Christian Church at 7:00 p.m. on May 1. Officer Farrar was a member and volunteer at the church. Members of the public are welcome to attend.