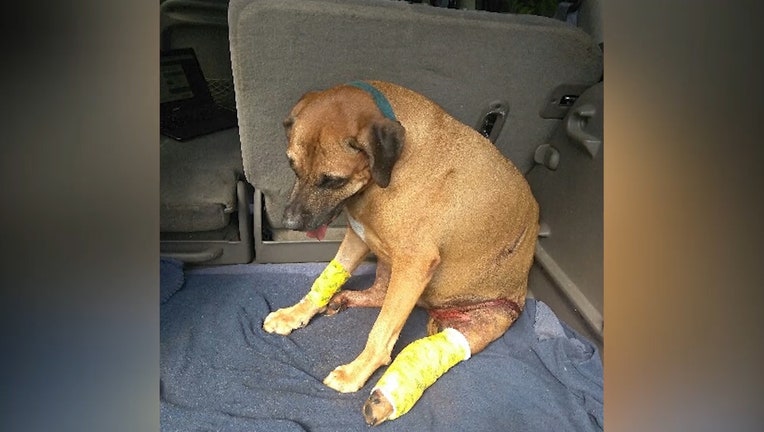 ORMOND BEACH, Fla. (WOFL FOX 35) - An Ormond Beach dog is recovering after being mauled by a gator.

On Wednesday morning, Daniel Westberry said his three dogs got out of his Putnam Ave. home, when a visitor accidently let them escape. He said the dogs ended up wandering several blocks away to a creek near Greenwood Ave. where a neighbor called Westberry saying one of the dogs had been attacked by an alligator. That dog: Westberry's 7 year-old dog Jack.

"But I guess they got in the water and the gator got a hold of Jack," said Westberry. "Thank God it was Jack cause one of the smaller dogs, they woulda been breakfast."

The 110-pound dog was able to get away, but not without serious injury. When Westberry arrived he said the neighbor had Jack wrapped in a towel with several puncture wounds on him. His leg clearly broken.

Westberry tried to get Jack help at a local vet but said the injuries were too bad. He had to take Jack to a specialist in Jacksonville where he still was Thursday, awaiting surgery, but expected to pull through.

"He's got a lot of heart and he's a tough old dog," said Westberry.

Westberry's hopeful Jack will be back home recovering by late next week. A representative from the Florida Fish Wildlife Commission said they have received the report about the gator attack and a trapper is trying to track it down.