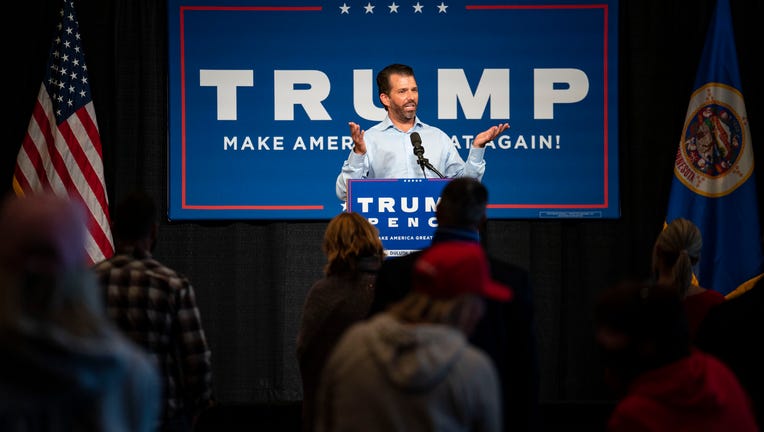 Duluth, MN September 9: Donald Trump Jr. spoke to a crowd of around 250 people inside the DECC during his campaign event in Duluth on Wednesday. (Photo by Alex Kormann/Star Tribune via Getty Images)

MESA, Ariz. - Donald Trump Jr. will visit Arizona this week to host multiple campaign events on behalf of his father.

The following day, Trump Jr. will visit Williams, Arizona for a "Native Americans for Trump" event at the Williams Rodeo Grounds at 1:30 p.m.

Later that day, the president's son will visit Mesa for a "Latter-day Saints for Trump" event scheduled to begin at 4:30 p.m. at the DoubleTree Phoenix-Mesa hotel located near the U.S. 60 and Alma School Road.

Trump Jr.'s visit comes less than a week after Joe Biden and Kamala Harris made campaign stops in the Valley to pitch an economic message during their first joint appearance on the campaign trail.

President Donald Trump was scheduled to visit Arizona, but his trip was postponed following his COVID-19 diagnosis.

General admission tickets for Trump Jr.'s event are available on the campaign website.

The Biden campaign says the ad featuring Cindy McCain will air across the state, on Fox News and during the NFL game on Sunday.

Ivanka Trump is set to visit Arizona on Oct. 11, according to Trump campaign officials, just days after her father's running mate visited the Grand Canyon State.