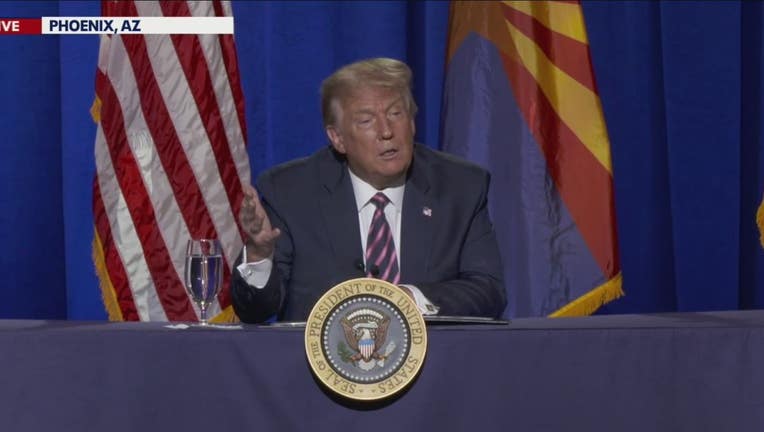 President Donald Trump at a Latinos for Trump event in Phoenix, AZ on September 14, 2020.

PHOENIX - President Donald Trump has postponed his plans to campaign in Tucson and Flagstaff after testing positive for COVID-19 on Oct. 2, his campaign manager announced.

"All previously announced campaign events involving the President's participation are in the process of being moved to virtual events or are being temporarily postponed," read a statement from the campaign.

Trump was originally set to make remarks at Make America Great Again rallies in Tucson on Oct. 5 and in Flagstaff on Oct. 6.

The president, Vice President Mike Pence, Second Lady Karen Pence, and Ivanka Trump visited Phoenix in September weeks prior in an effort to gain more support from Arizonans as the state has become a critical battleground for the 2020 election.

This would have been Trump's sixth visit to Arizona this year.

Polls show Trump with a one-point edge over Biden in Arizona, according to an ABC News/Washington Post public opinion survey on Sept. 23.

Vice President Joe Biden, the Democratic nominee, is visiting Arizona on Oct. 8, although the details about the event have not been released yet. His outreach to Arizona has been driven by online events with surrogates, including earlier in September with his wife, Jill Biden, and running mate, California Sen. Kamala Harris.

Trump with the edge over Biden in Arizona, Florida and Georgia battlegrounds: polls

The president holds a 1-point edge over the former vice president among likely voters in Arizona, according to ABC News/Washington Post public opinion surveys.

Trump’s re-election campaign pulled out all the stops this week in hopes of keeping Arizona’s 11 electoral votes.

Vice President Mike Pence is set to appear at events in Phoenix and Litchfield Park on Sept. 18 for the reelection campaign of President Donald Trump.