Humans are the likely cause of the shift in Atlantic hurricane cycles, a new climate study suggests

Earth is trapping double the amount of heat than it was in 2005, according to "alarming" data collected by NASA and the National Oceanic Atmospheric Administration.

Scientists from NASA and the NOAA observed data from NASA's Clouds and the Earth's Radiant Energy System (CERES) suite of satellite sensors which measure how much energy leaves Earth, and compared those levels to data collected by ocean floats from around the world called Argo. These floats are able to measure and estimate the rate at which the world’s oceans are heating up, according to NASA.

"The two very independent ways of looking at changes in Earth's energy imbalance are in really, really good agreement, and they're both showing this very large trend, which gives us a lot of confidence that what we're seeing is a real phenomenon and not just an instrumental artifact, " said Norman Loeb, lead author for the study and principal investigator for CERES at NASA's Langley Research Center in Hampton, Virginia. "The trends we found were quite alarming in a sense." 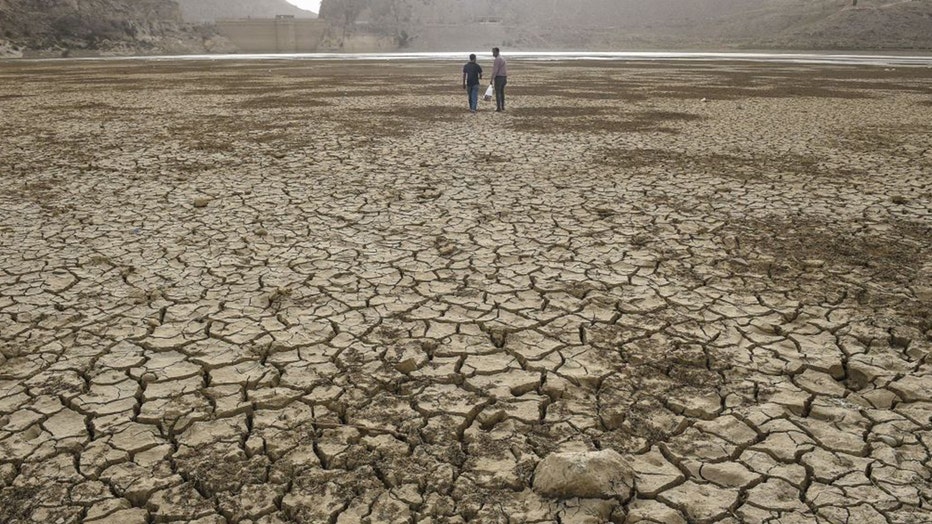 FILE - People walk on the dry bed of Hanna lake in Urak Valley on June 10, 2021. (BANARAS KHAN/AFP via Getty Images)

Scientists were able to determine Earth’s increasing imbalance by observing several factors including "clouds, water vapor, combined contributions from trace gases and the output of light from the Sun, surface albedo (the amount of light reflected by the Earth's surface), tiny atmospheric particles called aerosols, and changes in surface and atmospheric temperature distributions."

Additionally, the continued release of greenhouse gases such as methane and carbon dioxide created by human activity into Earth’s atmosphere has contributed to the drastic imbalance and climate change, according to NASA.

"The warming drives other changes, such as snow and ice melt, and increased water vapor and cloud changes that can further enhance the warming. Earth’s energy imbalance is the net effect of all these factors," NASA said.

Another key factor driving the heat is the Pacific Decadal Oscillation (PDO).

The PDO is a temperature fluctuation of the Pacific Ocean that switches from hot to cold about every 10 to 20 years, according to NASA. Right now, the PDO is in a warming phase.

According to the recent study, the PDO warming phase has reached intense temperatures that began in 2014 and has continued into 2020, which has caused a widespread reduction in cloud coverage over the oceans, thereby increasing solar radiation absorption.

"It's likely a mix of anthropogenic forcing and internal variability," said Loeb. "And over this period they're both causing warming, which leads to a fairly large change in Earth's energy imbalance. The magnitude of the increase is unprecedented."

Despite the worrying results of the study, Loeb noted that the recent data only reflects the Earth’s most current balance and can shift at any time in the future. But if Earth’s imbalance continues on a warm streak, "greater changes in climate than are already occurring should be expected."

"The lengthening and highly complementary records from Argo and CERES have allowed us both to pin down Earth’s energy imbalance with increasing accuracy, and to study its variations and trends with increasing insight, as time goes on," said Gregory Johnson, co-author on the study and physical oceanographer at the National Oceanic and Atmospheric Administration's Pacific Marine Environmental Laboratory in Seattle, Washington. "Observing the magnitude and variations of this energy imbalance are vital to understanding Earth’s changing climate."