A herd of elephants rested in Xiyang Township on June 7 after being noticed wandering through populated areas of the Yunnan province in recent weeks, including populated areas such as the city of Kunming.

BEIJING - A herd of migrating wild elephants was caught napping in China’s Xiyang township after causing a stir when local authorities attempted to divert them away from Kunming, a major city with nearly 7 million residents.

Authorities have blocked traffic on roads while the elephants crossed, set up barriers and used food as bait to try to lure them away from Kunming and other populated areas.

As of Monday, the herd has remained on the outskirts of Kunming.

Major global media are chronicling the herd's more than yearlong, 300-mile trek from their home in a wildlife reserve in the mountainous southwest Yunnan province.

Chen Mingyong, an Asian elephant expert cited by Xinhua, said the incident was the longest-distance migration of wild elephants recorded in China. Chen said it was possible their leader "lacks experience and led the whole group astray."

Twitter and YouTube are full of clips of their various antics, particularly those of two calves who slipped into an irrigation ditch and had to be helped out by older members of the group. 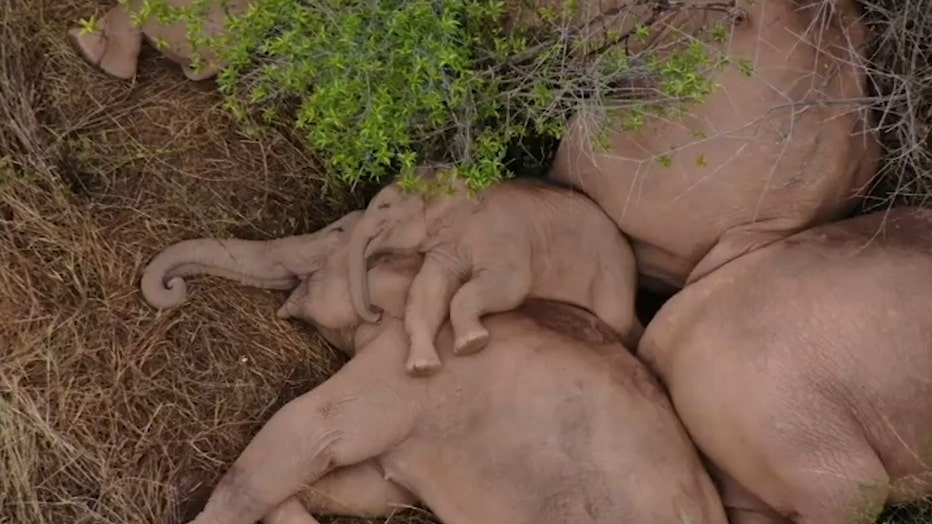 They've raided farms for food and water, visited a car dealership and even showed up at a retirement home, where they poked their trunks into some of the rooms, prompting one elderly man to hide under his bed.

A task force of more than 410 emergency response personnel and police personnel, scores of vehicles and 14 drones were deployed to monitor all 15 elephants.

A herd of wild elephants rested in Xiyang Township on June 7 after being noticed wandering through populated areas of Yunnan province in recent weeks, including populated areas such as the city of Kunming.

Drone footage captured the herd taking a well-deserved nap in the Xiyang township on June 7. Video showed one of the younger mammals snuggling up to an older one attempting to get comfortable.

Damage done by the elephants to farmland is estimated at 6.8 million yuan ($1.1 million), according to Xinhua.

Asian elephants, the continent's largest land animal, are declining overall, with less than 50,000 left in the wild. Habitat loss and resulting human-wildlife conflict are their biggest threats, along with poaching and population isolation.

Elephants are given the top level of protection in China, allowing their numbers to steadily increase even as their natural habitat shrinks, and requiring farmers and others to exercise maximum restraint when encountering them. Government orders have told people to stay inside and not to gawk at them or use firecrackers or otherwise attempt to scare them away.