Duluth police chief on murder of family of four: 'It's hard on all of us'

Duluth Police Chief Mike Tusken released new details on Thursday after a family of four was murdered by a relative this week.

DULUTH, Minn. (FOX 9) - Police have now identified the family killed in what investigators are now calling a murder-suicide in Duluth on Wednesday.

Five people were found dead at a home in Duluth after police were called in for a welfare check. Thursday, Duluth police identified the victims as:

Police also identified the man suspected of shooting the victims as Brandon Taylor Cole-Skogstad, who police say was the nephew of Riana and Sean Barry.

Speaking Thursday afternoon, Duluth Police Chief Mike Tusken explained how the homicide has been tough for everyone to comprehend, from members of the community to the officers investigating the case.

"You know, one of the things that, going through to the house, that our officers indicated – part of it that was really hard for them –  was that the walls all had photos of the family," explained the chief. "So it seems like a really tight family unit and makes this even more heartbreaking and tragic."

"It's tough on all of us," added Chief Tusken. "It's tough on our cops. You know, some of our police officers, a lot of them, they have families. And anytime you go into a situation like this and you see that tragedy, it is terribly heart-wrenching, and you can't unsee it. So it's very difficult."

Before taking his own life, Cole-Skogstad wrote a confession on Facebook, FOX 21 in Duluth reports.

An immediate family member confirmed to FOX 21 in Duluth the 29-year-old man wrote about suffering from mental health illness for many years and how he "almost never sought out help because I felt I never deserved it."

"I now make this post to say, I have made the absolutely horrid choice in not only taking my life, but the lives of my aunt, Riana Lou Barry, my uncle Sean Barry, and my two sweet, beyond angelic cousins Sadie Lucille Barry and Shiway Elizabeth Barry," Cole-Skogstad wrote. 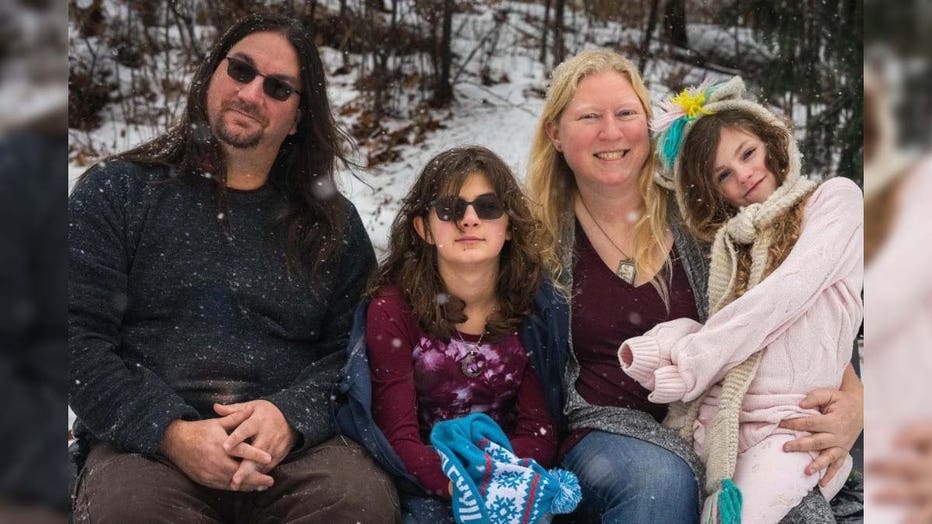 Picture of husband, wife and their two kids who were among five relatives found dead in a Duluth home Thursday. Photo courtesy of male victim’s sister.

"I cannot fathom how I came to this decision, but I do know this. If there is a God sitting in heaven, I wish so much that he grant my family the most peaceful heavenly afterlife possible. If God can truly forgive me, weather or not I ask for it. Weather or not I feel I am worthy, I only ask to tell them all sorry.

"I truly hope I can learn to accept feelings of love from those that gave it.

"I love you all and please know I knew you all loved me. I tried my best to fight it."

The man wrote the post around 11:30 a.m. Wednesday, and about 10 minutes later, he wrote another post writing, "Good bye now. I love you all."

The investigation started Wednesday morning in Hermantown around 11:15 a.m. when police were called to make a welfare check of a man suffering from mental health trouble. The call was sparked by the troubling Facebook post and other messages, police said. Visiting a home on the 4100 block of Timber Lane Drive, officers attempted to make contact with Cole-Skogstad but were unable to contact him.

The investigation led officers to a family home in Duluth on the 700 block of East 12th Street. When police knocked on the door around 12:30 p.m., officers say they heard a single gunshot. Investigators retreated from the home and called in SWAT teams and help from partner agencies.

After gearing up, police were able to enter the home shortly after 3 p.m. and search. Inside, they discovered five bodies and a dead dog.

Officers say it appears the victims were shot while they were sleeping and the suspect later turned the gun on himself.

Five people have been found dead inside a Duluth home after an investigation on Wednesday in the city.