The University of Arizona’s Feryal Ozel called the Milk Way's black hole "the gentle giant in the center of our galaxy" while announcing the new image captured by astronomers during a press conference on May 12, 2022.

WASHINGTON - Using telescopes worldwide, astronomers have captured the first image of the supermassive black hole at the center of the Milky Way.

Meet Sagittarius A*, located more than 27,000 light years away from Earth and with gravity 4 million times more massive than our sun. The team behind the achievement has nicknamed it Sgr A* pronounced "sadge-ay-star."

For a long time, black holes were theorized but never visualized. In 2019, the Event Horizon Telescope (EHT) Collaboration released the first image of a supermassive black hole (M87*) at the center of a distant galaxy called Messier 87, finally revealing what Albert Einstein had predicted.

Now, we're getting the first look at the enormous black hole at the center of our home galaxy, the Milky Way. 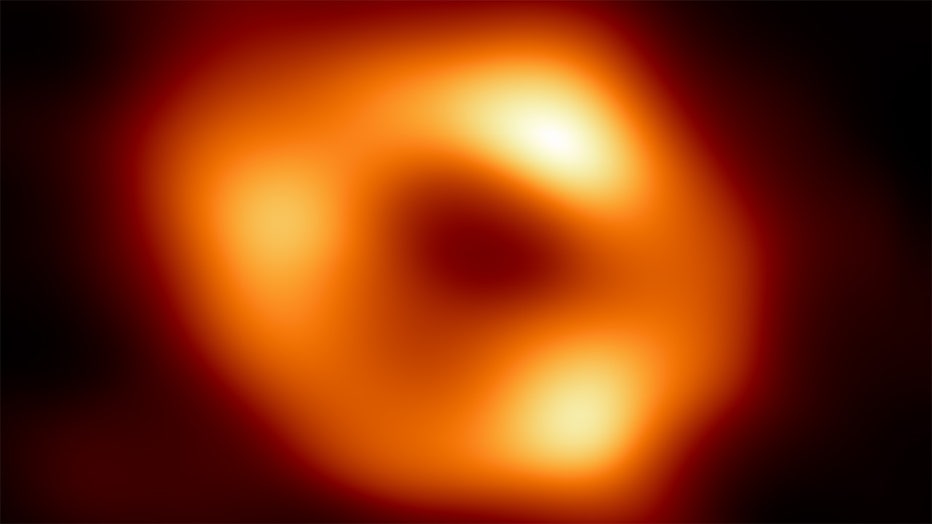 This is the first image of Sagittarius A* (or Sgr A* for short), the supermassive black hole at the center of our galaxy. (Credit: EHT Collaboration)

So what are we looking at?

According to a news release, an event horizon is the boundary of a black hole where no light can escape. That boundary is not visible in these photos because light cannot escape, but the "glowing gas orbiting around the black hole reveals a telltale signature: a dark central region (called a "shadow") surrounded by a bright ring-like structure." This is what's creating the fiery doughnut-like shape revealed on Thursday.

After five years of work, the team published their findings Thursday in "The Astrophysical Journal Letters."

Researchers said capturing our black hole was more difficult than Messier 87's because ours is much smaller.

EHT scientist Chi-kwan ‘CK' Chan, from Steward Observatory and the Department of Astronomy and the Data Science Institute of the University of Arizona, said that while the gas around both black holes moves nearly as fast as light it takes weeks to travel around the larger M87* and only minutes to travel around Sgr A*.

"This means the brightness and pattern of the gas around Sgr A* was changing rapidly as the EHT Collaboration was observing it — a bit like trying to take a clear picture of a puppy quickly chasing its tail," Chan explains. 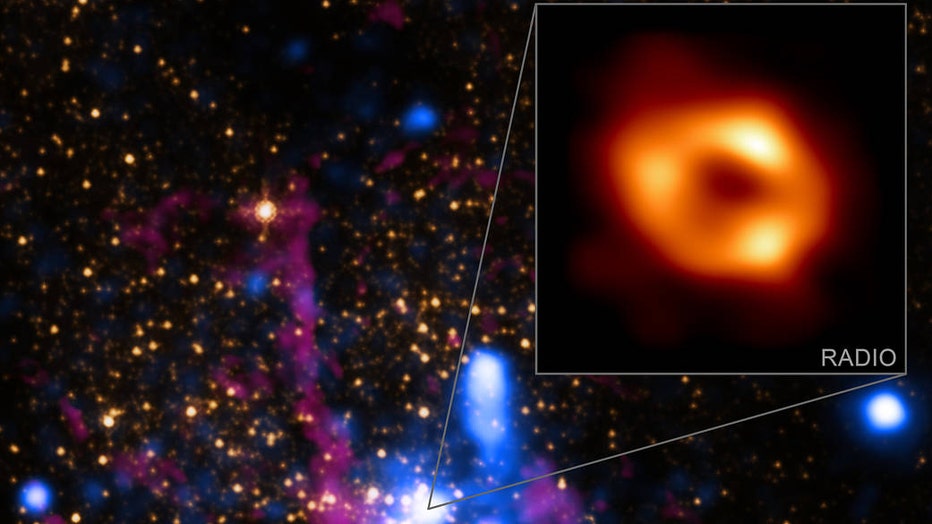 According to the University of Arizona, M87* is more than 1,000 times larger than more massive than Sgr A*.

Scientists were using an "Earth-sized" telescope known as the Event Horizon Telescope Collaboration to capture Sagittarius A*, or at least the doughnut-like shadow of the hole and its glowing gases. This worldwide telescope combines eight radio observatories worldwide to make up EHT.

More than 300 researchers and 80 institutions make up the EHT Collaboration.

"Now we can study the differences between these two supermassive black holes to gain valuable new clues about how this important process works," said EHT scientist Keiichi Asada from the Institute of Astronomy and Astrophysics, Academia Sinica, Taipei. "We have images for two black holes — one at the large end and one at the small end of supermassive black holes in the universe — so we can go a lot further in testing how gravity behaves in these extreme environments than ever before."

The EHT team is working on expanding its network of telescopes and eventually sharing more images and even videos of black holes.