SURFSIDE, Fla. - Four additional bodies were found in the rubble of a collapsed condo tower in Florida, bringing the death toll to 36 people, as rescue crews continued to search amid the threat of thunderstorms from a tropical storm hitting the state.

Crews in yellow helmets and blue jumpsuits searched the debris for a 13th day while wind and rain from the outer bands of Tropical Storm Elsa complicated their efforts. Video released by the Miami-Dade County Fire Rescue Department showed workers lugging pickaxes and power saws through piles of concrete rubble barbed with snapped steel rebar. Other searchers could be seen digging with gloved hands through pulverized concrete and dumping shovels of debris into large buckets.

Workers have continued to look for open spaces where people might be found alive nearly two weeks after the June 24 collapse. No one has been rescued alive since the first hours after the collapse when many of the building's residents were asleep.

Florida officials gave an update in the search of a collapsed condo tower in Florida on July 6, 2021.

While officials still call the efforts a search-and-rescue operation, Miami-Dade Mayor Daniella Levine Cava added that loved ones of those still missing are preparing for news of "tragic loss."

"I think everybody will be ready when it’s time to move to the next phase," said Levine Cava, who stressed that crews would use the same care as they go through the rubble even after their focus shifts from searching for survivors to recovering the dead.

"Really, you will not see a difference," she said. "We will carefully search for bodies and belongings, and to catalog and respectfully deal with any remains that we find." 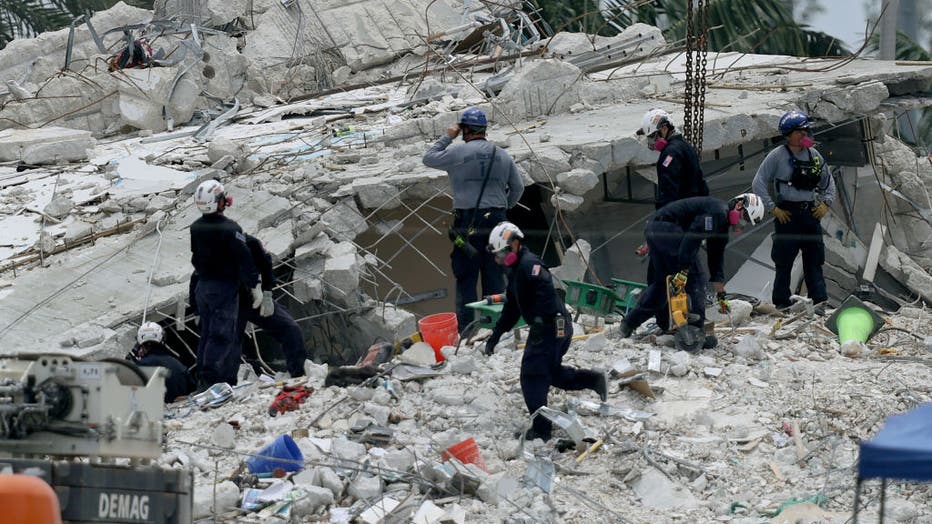 SURFSIDE, FLORIDA - JULY 05: After a brief stoppage to demolish the standing remains, Search and Rescue personnel continue working in the rubble pile of the partially collapsed 12-story Champlain Towers South condo on July 5, 2021, in Surfside, Flori

Meanwhile, teams also faced heavy bands of rain and thunderstorms as Tropical Storm Elsa moved toward Florida. Lightning forced crews to pause the search on Monday and a garage area in the rubble also filled with water, officials said.

Tropical Storm Elsa path: What you need to know

With Tropical Storm Elsa approaching the Florida coast, the director of the National Hurricane Center, Ken Graham, describes the storms path and what conditions can be expected in the coming days. Tropical storm warnings and watches have been issued along the west coast, including Tampa, and central Florida.

Cava said the delays have frustrated rescue crews, who work through the rain but must pause for lightning.

"Truly they live to save lives, and they’ve pushed ahead no matter what is thrown in their way," she said at an evening news conference.

The demolition on Sunday of the remaining portion of the structure that was still standing allowed teams to access previously unreachable places, including bedrooms where people were believed to be sleeping at the time of the disaster.

The demolition was prompted by fears that the rest of the structure could fall, Levine Cava said. Teams had been unable to search areas closest to the building over its instability.

Rescue work was paused over the weekend as specialists drilled holes for explosives needed for the demolition.

"Truly we could not continue without bringing this building down," she said.

The remaining building of the condo in Surfside was demolished on July 4. Miami-Dade Mayor Daniella Levine Cava said that bringing down the building was critical to the search-and-rescue efforts.