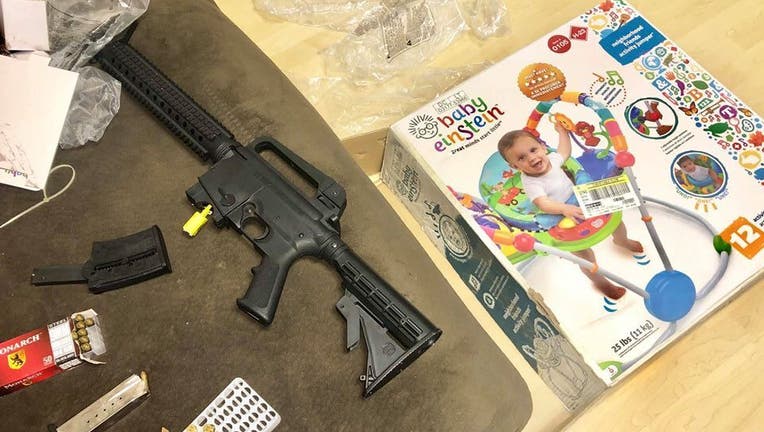 CRESTVIEW, Fla. - A Florida couple shopping for a baby shower gift thought they got a great deal when they found a baby bouncer for only $10 at Goodwill. What they didn't expect was to find a semi-automatic rifle inside.

Veronica Alvarez-Rodriguez said she was attending a baby shower on Sunday, so she stopped by the Goodwill in Valparaiso to pick up a gift. That's where she found a Baby Einstein baby bouncer in an unopened box that appeared to be new. For only $9.99, it was quite a bargain.

MORE NEWS: Florida father left young son at side of highway because he might be gay: police

Alvarez-Rodriguez took the gift to the baby shower where the father-to-be opened the box and said "You guys got me a gun," the Palm Beach Post reported.

Turns out, the baby bouncer box contained a Mossberg 715T semi-automatic rifle. Although the gun wasn't loaded and the chamber was locked, Alvarez-Rodriguez said the magazine inside the box was loaded.

Alvarez-Rodriguez posted photos of the unexpected gift to Facebook.

"When you go to the Goodwill for a baby shower gift thinking you got a good deal on a bouncer ($10) not even opened and you end up opening a 🔫MOSSBERG 715T Semi-Auto Rifle," she wrote.

"Total shock for us," she told FOX 35 News. "But also hilarious and just glad it came into safe hands with all of our husbands being military."

Crestview police were called and an officer told them they could keep the gun after checking their IDs. On Monday, however, police requested they turn over the rifle while the incident is being investigated.