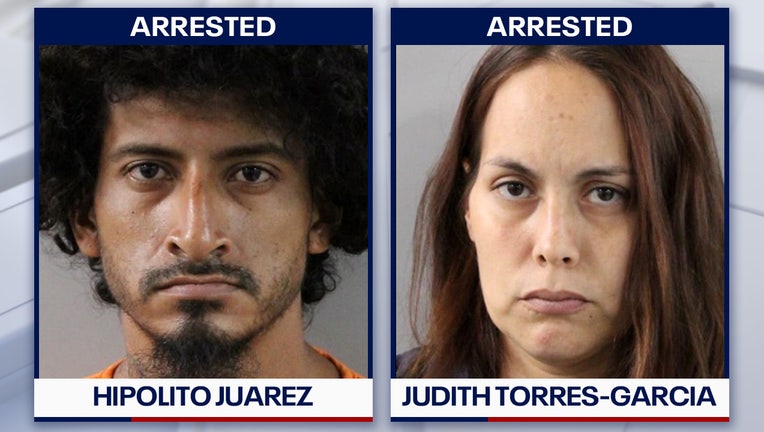 According to the sheriff’s office, deputies and paramedics responded to a report of an infant who was not breathing after the parents said he had fallen out of a crib on Saturday.

During the investigation, deputies said 31-year-old Judith Torres-Garcia told them the baby started crying and woke her up around 1 p.m. When she checked on the infant, she claimed she blacked out.

Detectives said, according to 32-year-old Hipolito Juarez, he was in bed when he "heard a smack," and went to check on the child. He said he found Torres-Garcia on the ground with the baby underneath her body.

Juarez picked up the 2-month-old and noticed he was unresponsive, according to the sheriff’s office. Both suspects dialed 911.

Polk County Fire Rescue airlifted the baby to Tampa General Hospital in extremely critical condition, saying the child had a skull fracture. When the infant arrived at the hospital, doctors said he had multiple head fractures and severe brain bleeding.

"When we get the baby to the hospital and they perform some basic medical tests and some x-rays, the back of the baby's skull is crushed, it's crushed," Polk Sheriff Grady Judd said. "You think of a baby or anyone laying down and the back of the head has some curvature to it. This baby's head was flat."

The child died later that evening.

READ: Lakeland police searching for suspects who gunned down father of 4 at gas station

After an autopsy was completed, the medical examiner said the infant had several head injuries, contusions on the body, and an injury to the right leg. The cause of death was ruled a homicide.

"Clearly, unequivocally, according to the medical examiner who is simply the very best, he said that baby's injuries are extensive, very violent and was not caused by the baby being dropped and/or rolling out of the bassinet, or even mama falling on the baby," the sheriff said. "This was a very, very hard crushing blow to the baby's head."

"It's our supposition that [Torres-Garcia] took this baby and sprung it onto the ground one time, [Juarez] heard the crack," Judd added.

"This 8-week-old infant was killed by a woman who lives with a convicted felon and illegal drugs in the home," Sheriff Grady Judd said in a statement. "This baby's life had barely begun. What a tragedy. We will do everything possible to make sure this suspect is held accountable and prosecuted to the fullest extent of the law."

Juarez was arrested on drug-related charges, but investigators said he was not near the child and did not touch the child. Deputies said he is a convicted felon with several past charges including burglary and driving without a license.

Torres-Garcia faces several charges including aggravated manslaughter of a child and possession of drugs.

"This is a clear example of a beautiful little baby boy who was healthy and he was murdered," Judd said. "We can call it manslaughter, we can call it aggravated manslaughter, this infant was murdered. And every bit of the evidence in this point of the investigation shows that Judith Torres-Garcia is the one that murdered him."