Theft of French bulldogs on the rise across the country

Cara Berardo, a board member of French Bulldog Village Rescue, and her French bulldog Bernice join FOX 29 to discuss the rise in French bulldog thefts.

PHILADELPHIA - The popularity of the French bulldog has increased over the years and so have thefts of the breed.

According to the American Kennel Club's list of the most popular dog breeds in 2021, the French Bulldog ranked number two.

The canine has exceeded expectations and surpassed the popularity of other top-ranked dogs such as the German Shepard and Golden Retriever.

Fox 29 anchor Mike Jerrick asked the burning question, "The screaming question is, why are people stealing them?"

Berarado says the value of each French Bulldog may be motivation for theft as they range in price from $5,000 to $10,000.

In 2021, singer and actress, Lady Gaga was a victim of two of her French Bulldogs being stolen.

The Los Angeles Police Department believed the motive behind the robbery was the value of the dogs rather than the platform of the owner.

Locally, a Philadelphia man spoke to FOX 29 after his French Bulldog puppy named Chaos was stolen from his home on the 4800 block of Darrah Street. 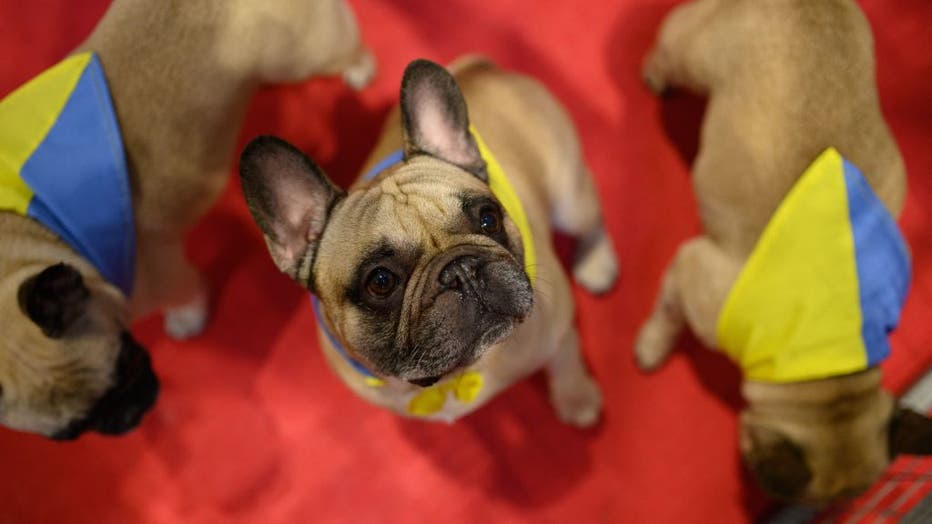 French Bulldogs wearing bandanas in the colours of the Ukrainian flag rest in their pen on the first day of the Crufts dog show at the National Exhibition Centre in Birmingham, central England, on March 10, 2022. (Photo by OLI SCARFF / AFP) (Photo by