Most people traveling to the south rim of the Grand Canyon pass through Valle and residents want to rename the community so tourists know the national park is just up the road and business owners hope it will help the small town stand out on maps.

VALLE, Ariz. - A heavily traveled highway junction near Arizona’s most well-known tourist attraction could be getting a new name if some residents have their say.

Most people headed to the Grand Canyon’s South Rim pass through Valle, an unincorporated community known for decades for a roadside attraction with a Flintstones motif that’s now a raptor ranch. Still, a sign stands tall welcoming visitors with a "Yabba Dabba-Doo."

MORE: Bedrock City sold; owners intend to keep a bit of the Flintstones in the new attraction

About a dozen residents and business owners in Valle, halfway between Interstate 40 and Grand Canyon Village, are pushing for the name change. They say they want to give their community additional prominence and clear up any confusion about the existing name, the Arizona Daily Sun reported.

"Nobody knows where Valle is. And some people when you’re talking to them, especially people that live in Arizona, they always think of Phoenix," Johnson said. "We said, ‘You know, let’s think of a name that really sounds more like northern Arizona, and what it is: a junction on the way to the Grand Canyon.’"

Visitors have confused Valle with metro Phoenix or the Verde Valley, residents say, and aren’t always sure how to pronounce it. Locals generally pronounce it as "valley," though the name derives from Spanish, which pronounces a double "l" as a "y."

The area is growing, becoming a hub for glamping sites and tourists. More closely tying the community to the Grand Canyon could help boost the economy, said resident Thad Johnson.

The nearby town of Tusayan, a few miles outside the South Rim entrance, and the Coconino County Board of Supervisors support a name change for Valle.

The effort began in earnest last August and has seen some success already with the name changed on Google maps.

Residents are awaiting a decision on a formal application submitted to the U.S. Geological Survey, the agency in charge of naming and mapping geographic features, Johnson said.

"Typically, from what we’ve heard, the USGS is going to take the local residents’ input in something like this, because they don’t really care," Johnson said. "They just needed a name when they put a map together years ago."

A decision could take a year. If it’s approved, the residents’ expectations are that other government agencies would change road signs and maps. 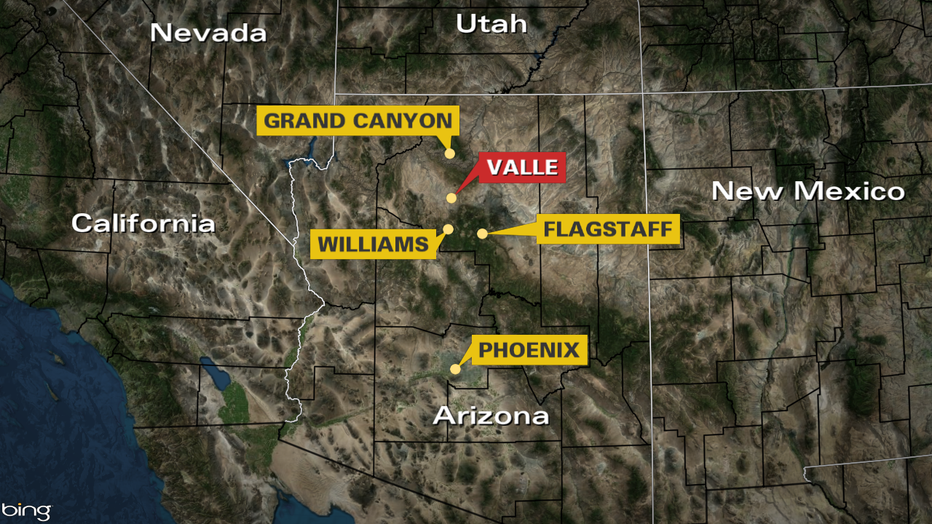 Some locals have been calling the area "the junction" or simply "junction," although Valle has appeared on official maps since the 1980s, they say.

But the name has been associated with the area for much longer.

Sean Evans, an archivist at Northern Arizona University, said records show Valle associated with a railway and ranching operation in the area as far back as 1899.

A change to Prado, Spanish for "meadow," in the mid-1920s didn’t last long because another location had the same name, Evans said.

In the last decade, Tusayan was the subject of its own name-change proposal when residents discussed calling it "The Town of Grand Canyon" or "Grand Canyon South."

There was talk of the marketing potential for the town and confusion between Tusayan and Tucson, the Arizona city 268 miles (432 kilometers) to the south.

It's back! Salt River Tubing opens for summer 2021 season

Salt River Tubing near Mesa is back open for business for the summer 2021 season!

Grand Canyon opens lottery for shooting bison in the park

Potential volunteers will have 48 hours to submit an application to kill some of the bison at Grand Canyon National Park this fall.

Officer Matt Litman began his cancer battle in March 2021. He was diagnosed with an extremely rare tumor that is normally not found in people his age. On April 30, members of the community gathered to welcome the officer home.