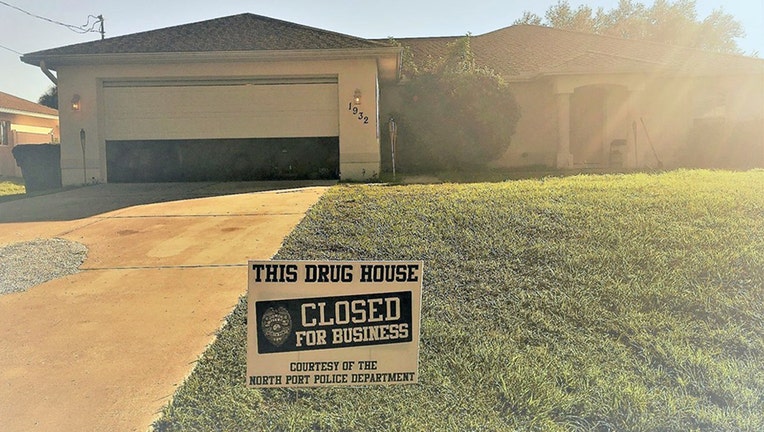 Two years ago, reports of illegal activity along South San Mateo Drive prompted the deployment of the department’s Special Enforcement Team, which posted up in the area to let the community know officers had their back.

Armed with a tent, grill, cornhole boards, and a sense of humor, officers held an impromptu block party to send a message: North Port is a place for community, not crime.

But the residents of one house did not seem to get the message. After 51 calls to the home at 3360 S San Mateo Drive, officers arrested 41-year-old Tandra Knoepke for felony keeping a nuisance structure, possession of drugs and possession of drug paraphernalia.

Last year, when North Port officers served a search warrant at an alleged drug house on Exotic Avenue, they said a sign on the inside of the home said, “Do not answer the door 4 the police ever.” Also inside the home was drugs, meth pipes, heroin spoons, and ammunition, according to police.

This week, the Special Enforcement Team was at it again, this time, serving a search warrant at 1932 Waltrip St. Officers said they made two arrests on charges related to meth, cocaine, and violation of probation.

After the arrests, NPPD had a message for others whose residences are being used to buy and sell drugs: “While you think you’re getting away with it,” the Special Enforcement Team is building a case.

In a post on Facebook, NPPD posted a photo of the home. The yard sign out front reads “This drug house closed for business courtesy of the North Port Police Department.”

“Drug dealers, it’s a ‘sign’ of things to come,” the department wrote in the photo’s caption. “The North Port Community is putting you on notice.”

It may be a sign for other law-breakers in the community, but the signs also show nearby residents the police are working to keep them safe.