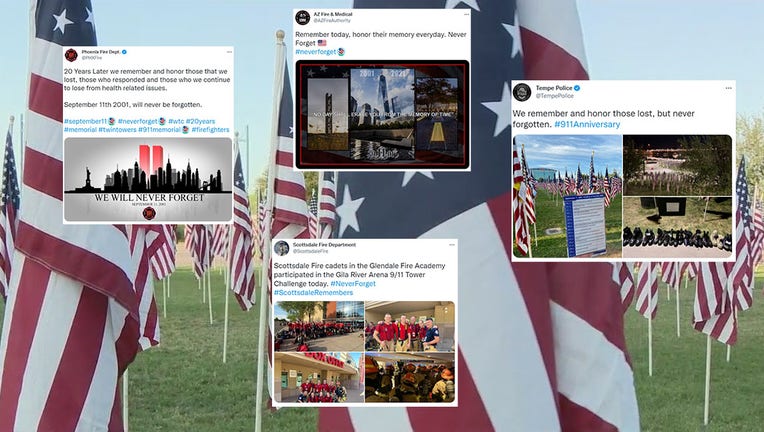 PHOENIX - As the country remembers the terror attacks that took place 20 years ago on Sept. 11, first responder agencies in Arizona are spending the day as usual – helping those who are in need – but are also taking time to reflect on the heroic acts of rescue crews and on those who lost their lives.

Some of the Valley's very own headed to the East Coast in 2001 to help victims of the attacks and to assist agencies.

Here are some ways local agencies are honoring the anniversary on social media, including the agencies documenting events held Saturday morning in remembrance.

Thousands of flags have been placed at Tempe Beach Park in memory of those who died in the Sept. 11 terror attacks. FOX 10's Desiree Fluellen reports.

The event, which was hosted by Scottsdale Fire, featured a friendly competition to honor firefighters who died on that fateful day in 2001. FOX 10's Stephanie Olmo reports.

For an Arizona man who responded to the scene of the September 11th attacks in New York City, he says memories from that day will remain with him forever. FOX 10's Matt Galka reports.

In the aftermath of the September 11 terrorist attacks, the U.S. airspace was closed, and Dave Krietor, who was Sky Harbor's director at the time, talked about what happened on that fateful day 20 years ago. FOX 10's Danielle Miler reports.