The climate crisis is among the dire stories that have dominated news headlines in recent years. Most recently, a United Nations science report detailed how human-caused global warming — already deadly with extreme weather — is about to get much worse.

"The cumulative scientific evidence is unequivocal: Climate change is a threat to human well-being and planetary health," the UN Intergovernmental Panel on Climate Change said in the Feb. 28 report, designed to guide world leaders in their efforts to curb climate change.

Scientists have warned that some risks associated with global warming can still be prevented or lessened with prompt action. World leaders have pledged to reduce their country’s greenhouse gas emissions and implemented various actions across energy, transportation and waste industries to help meet those goals.

On a micro-level, individuals can also play a big role in this global effort. And while there are perhaps more obvious ways to do this, such as insulating your home or putting up solar panels, there are other simple choices people can make in their day-to-day lives that can reduce one’s impact on the environment.

Many of these ideas require little or no extra cost and come with lifestyle benefits beyond living greener.

What is a carbon footprint?

A carbon footprint is the total amount of greenhouse gases, like carbon dioxide and methane, that are generated by our actions. Many daily activities cause these emissions, such as burning gasoline when we drive, burning oil or gas for home heating, or using electricity generated from coal, natural gas, or oil, the Environmental Protection Agency explains.

Estimates have suggested that in order to avoid a 2 degrees Celsius (3.6 degrees Fahrenheit) rise in global temperatures, the average global carbon footprint per year would need to drop to under 2 tons by 2050.

The Environment Protection Agency has a household carbon footprint calculator on its website that allows individuals to estimate their annual greenhouse gas emissions, based on home energy, transportation and waste estimates.

How to reduce your carbon footprint

1) Research scientists at the Harvard School of Public Health suggest eating lower on the food chain when possible, as foods from livestock accumulate impacts along the entire food chain that feeds them. And learn to love leftovers.

2) Additionally, choose organic and local foods that are in season, as transporting food from far away uses fossil fuels for fuel and for cooling to keep foods in transit from going bad.

1) Avoid shopping at fast fashion brands, which produce quick trends at more affordable prices — but come with a cost. The fashion industry produces between 2% to 8% of global carbon emissions, according to the United Nations Environment Programme — while other more recent figures have estimated 8%-10%. It also consumes a large amount of water, requiring around 2,000 gallons to make a typical pair of jeans. These trendy, cheap items have an environmental impact during manufacturing, transportation and often get discarded quickly, filling up landfills.

How fast fashion impacts the environment

Akhil Sivanandan co-founded Green Story, a platform to measure and communicate the environmental impact of products. He shares the negative aspects of fast fashion on our planet.

"It’s cheap to get, and it’s as many seasons as you want. That’s what makes fast fashion in that sense dangerous because it’s promoting hyper-consumerism," said Akhil Sivanandan, co-founder and CEO of Green Story, a startup that uses data to measure and help show consumers the environmental impact of products.

2) Buying secondhand or vintage is another suggested step. And when getting rid of old clothes, sell them on sites like Poshmark or ThredUp, donate them, or pass them on to someone else who will wear them.

3) Another suggested way to reduce one’s carbon footprint is to wash clothing in cold water. Doing two loads of laundry a week in cold water instead of hot or warm water can save up to 500 pounds of carbon dioxide each year, according to Columbia University’s Climate School.

1) In general, buying less stuff is more environmentally friendly and easier on the wallet. Each returned package leaves a trail of emissions from the giant trucks and planes that return it to the sender. For those seeking to return a purchased item, try reselling locally on Facebook Marketplace instead of shipping it back in the mail.

3) If shopping for a new appliance or electronic, look for "ENERGY STAR certified products" that meet strict energy-efficiency specifications set by the EPA. These both save energy and money while helping to protect the climate. 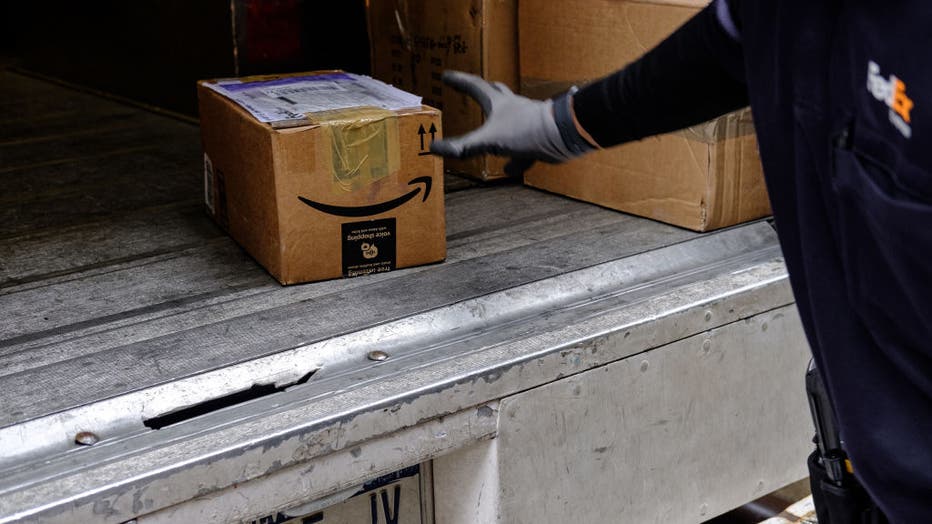 A driver for an independent contractor to FedEx Corp. unloads an Amazon.com (http://amazon.com/) Inc. package from a delivery truck in New York, U.S., on Monday, Nov. 26, 2018. Photographer: Christopher Lee/Bloomberg via Getty Images

1) Turn down the thermostat in the winter and raise it in the summer, which will also help save on energy bills. As Columbia University’s Climate School points out, most people with the ability will automatically crank up their AC in the summer heat — but this becomes a "vicious cycle" since most run on electricity produced by greenhouse gas-emitting coal and natural gas plants.

The emissions only exacerbate global warming and increase the need for AC. A 2018 report tracking global cooling, released by Sustainable Energy for All, estimated that 10% of the planet’s warming comes from cooling technologies.

2) Turn lights off when not in the room and unplug electronic devices when they are not in use. The EPA also recommends replacing incandescent lightbulbs with ENERGY STAR lights.

3) Make an effort to reduce, reuse and recycle to decrease household waste.

4) Some localities offer homeowners the ability to schedule a home energy assessment, like Massachusetts’ Mass Save program, which can provide energy-saving devices and suggest insulation and energy efficiency improvements to the home.

The state or local government energy or weatherization office may help identify a local company or organization that performs such audits. The Residential Energy Services Network also provides a directory of certified professional energy assessors by zip code.

1) Drive less and walk or bike more, which not only is a greener option but also a healthier one.

2) For those in the market, consider purchasing a hybrid or electric vehicle. But the Columbia Climate School suggests factoring in the greenhouse gas emissions from the production of the car as well as its operation.

"Some electric vehicles are initially responsible for more emissions than internal combustion engine vehicles because of manufacturing impacts, but they make up for it after three years," it said. This app called Carbon Counter rates vehicles based on their mileage, fuel type and emissions during both production, and if they are EVs, from generating the electricity to run them.

3) Take care of the car, including keeping tires properly inflated — which can save 10 cents per gallon, according to the Minnesota Pollution Control Agency. It estimates that about 40% of the 5 million cars on Minnesota roads don’t have properly inflated tires, and spew up to 306,000 extra tons of carbon dioxide per year as a result.

"These emissions directly contribute to increased greenhouse gases in the atmosphere. Reduce pollution by keeping your tires at the proper pressure," the agency states on its website.

The authoritative UN Intergovernmental Panel on Climate Change report warned that delaying cuts in heat-trapping carbon emissions "will miss a brief and rapidly closing window of opportunity to secure a liveable and sustainable future for all."

The report listed mounting dangers to people, plants, animals, ecosystems and economies, with people at risk in the millions and billions and potential damages in the trillions of dollars. It highlighted people being displaced from homes, places becoming uninhabitable, the number of species dwindling, coral disappearing, ice shrinking and rising and increasingly oxygen-depleted and acidic oceans.

The report called out how children who may still be alive in the year 2100 could experience four times more climate extremes than they do now — even with only a few more tenths of a degree of warming over today's heat.

At least 3.3 billion people's daily lives are already "highly vulnerable to climate change" and 15 times more likely to die from extreme weather, including deadly heat, fires, floods and drought, according to the report. Large numbers of people are being displaced by worsening weather extremes, and the world’s poor are being hit by far the hardest, the report said.

With every tenth of a degree of warming, many more people die from heat stress, heart and lung problems from heat and air pollution, infectious diseases, illnesses from mosquitoes and starvation, the authors said.