The president arrived at a West Palm Beach, Florida polling location to vote in the 2020 election before heading off to rally supporters in three other critical battleground states.

The president arrived at a West Palm Beach, Florida polling location on Saturday to vote in the 2020 election before heading off to rally supporters in three other critical battleground states.

"It was a very secure vote. Much more secure than when you send in a ballot, I can tell you that," the president said to reporters. "But it's an honor to be voting."

Trump praised the poll workers saying they were doing a fantastic job.

When asked who he voted for, the president replied, "I voted for a guy named Trump."

More than 52 million Americans have already voted in the 2020 election.

Democrat Joe Biden is throwing his attention — with a little help from rock legend Jon Bon Jovi — on hotly contested pockets of Pennsylvania that could prove key to deciding the outcome of the race there. 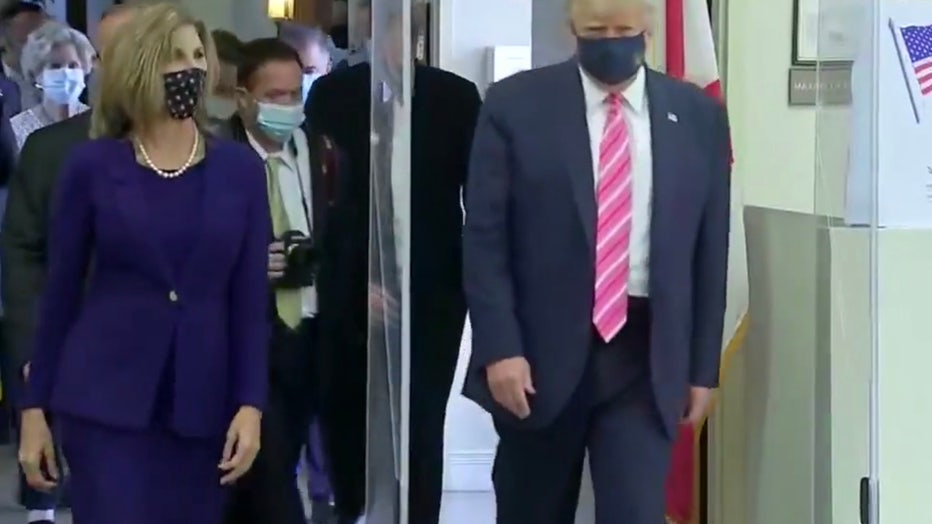 With just 10 days to go, Trump and Biden are pleading with their supporters to help them turn out support, particularly in several key states.

FOX 35 VOTER'S GUIDE: Everything you need to know about the 2020 election, including polling locations, early voting dates, and what is on the ballot

“To continue our movement. I am going to rely on you. Get out and vote,” Trump told supporters in Florida on Friday. “Vote early. Bring your friends, your family, your neighbors, your co-workers. Even grab your boss and say: ‘Come on, boss. You got to vote.’”

Trump is set to hold big rallies in Lumberton, North Carolina, Circleville, Ohio, and Waukesha, Wisconsin, and promises to go full throttle over the final 10 days of the campaign with a series of big rallies even as the number of new daily coronavirus cases continues to climb. The U.S. recorded 71,671 new cases Thursday, with several states setting records across the Midwest and West.

Biden has focused much of his attention on making the case to voters that Trump doesn’t deserve a second term because of his handling of the pandemic that has killed more than 220,000 Americans and upended the economy.