States from New York to North Carolina are issuing quarantines for the spotted lanternfly, an invasive, plant-killing pest.

"It was like it was raining lanternflies when you walk outside," Gavyn Essner told FOX 29 Philadelphia of the sheer number of bugs in his yard.

The spotted lanternfly is not only pervasive and invasive but deadly to plants. The plant-hopping bug pierces plants with their mouth and sucks sugary sap out of the stems, according to the Pennsylvania Department of Agriculture. 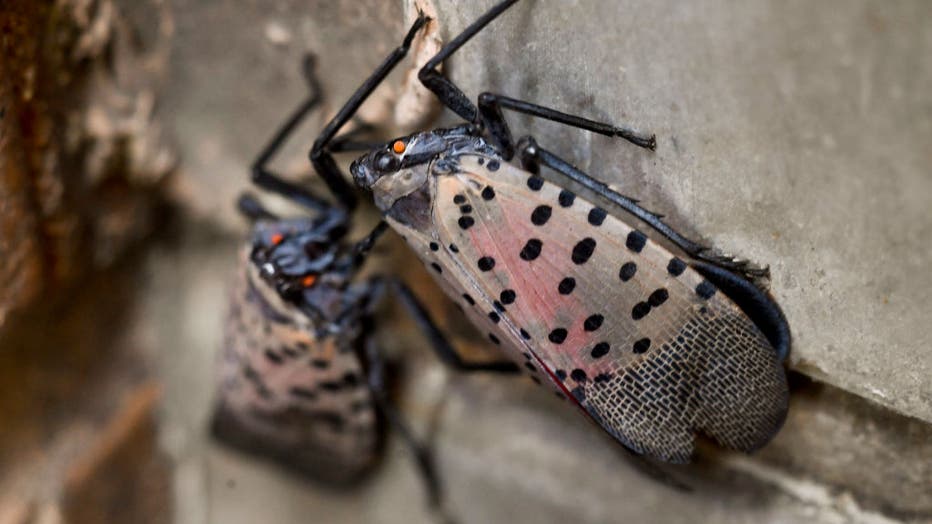 "Our yard – this was the worst year so far," said Essner about the insects. He started noticing lanternflies three to four years ago in his Williamstown, New Jersey yard. "The previous years we have seen them here and there, nothing major, but this is by far the worst. I had to wrap tape around the trees this year." 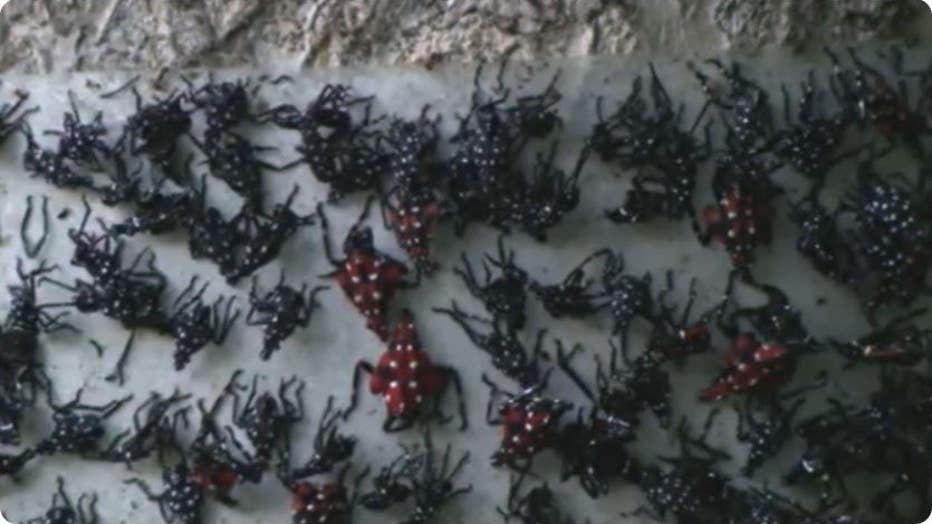 Essner wrapped tape around his trees. This is only four days of bugs. (FOX 29 Philadelphia)

The lanternfly is even more destructive to hardwood forests, orchards and vineyards. It deprives plants of sap, causes wilting, dieback and makes plants more susceptible to other diseases and pests. 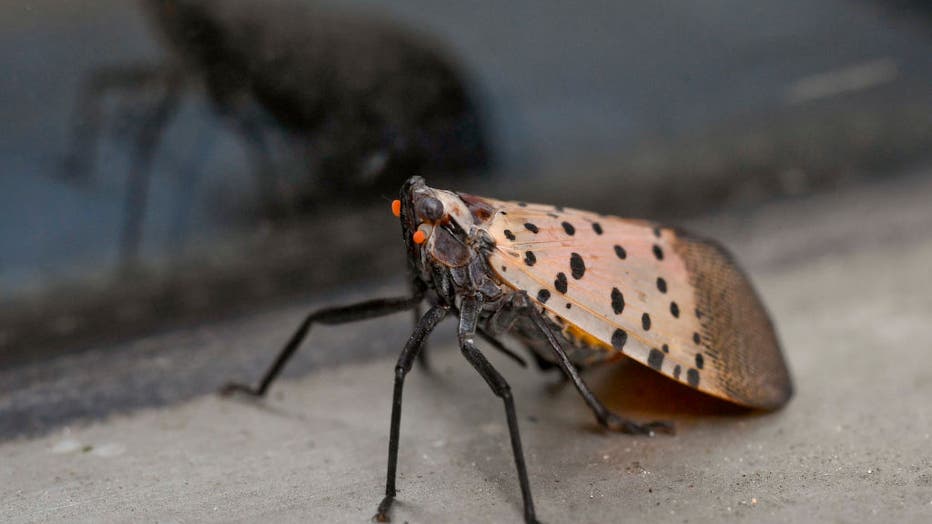 FILE - A Spotted Lanternfly on a window ledge on Sept. 28, 2020, in Reading, Pennsylvania. (Photo by Ben Hasty/MediaNews Group/Reading Eagle via Getty Images)

"Some vineyards have seen a 100% crop loss," Sharon Powers of Pennsylvania’s Department of Agriculture told FOX Weather’s Katie Byrne. "They are a threat to our economy as well as our quality of life."

In addition to sucking sap, the fly that travels in swarms and covers plants also produces honeydew. 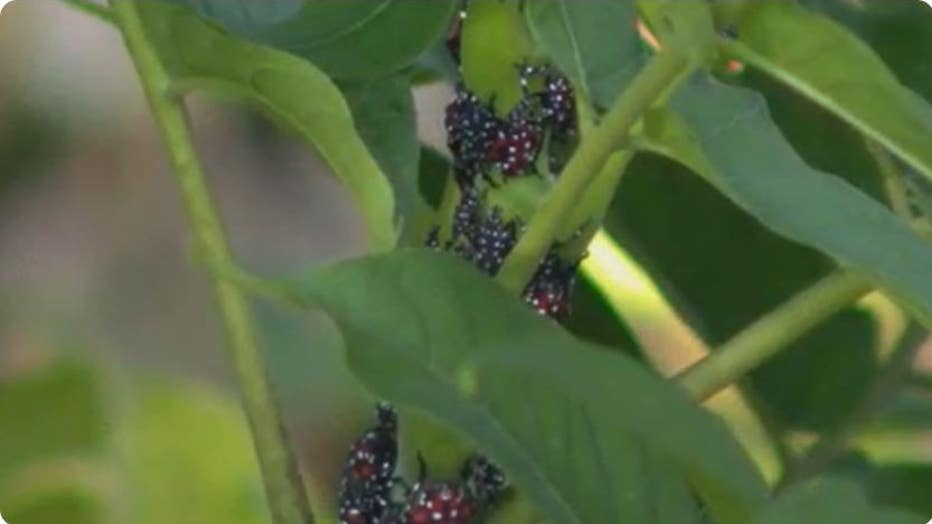 "The honeydew that the insects squirt out covers the plants, blocks photosynthesis, so the plant doesn't get the sunlight it needs," explained Powers. "And the plant is basically smothered, but it's also covered with a black, sooty mold that destroys the plant."

Honeydew is a sugary substance that promotes mold growth. The mold is not harmful to humans but can be a mess when it covers decks, play sets and outdoor furniture.

"Stop, scrape and squash!" says a yard sign the Pennsylvania Ag Department distributes to remind residents to eradicate the bug that is not harmful to humans or pets. 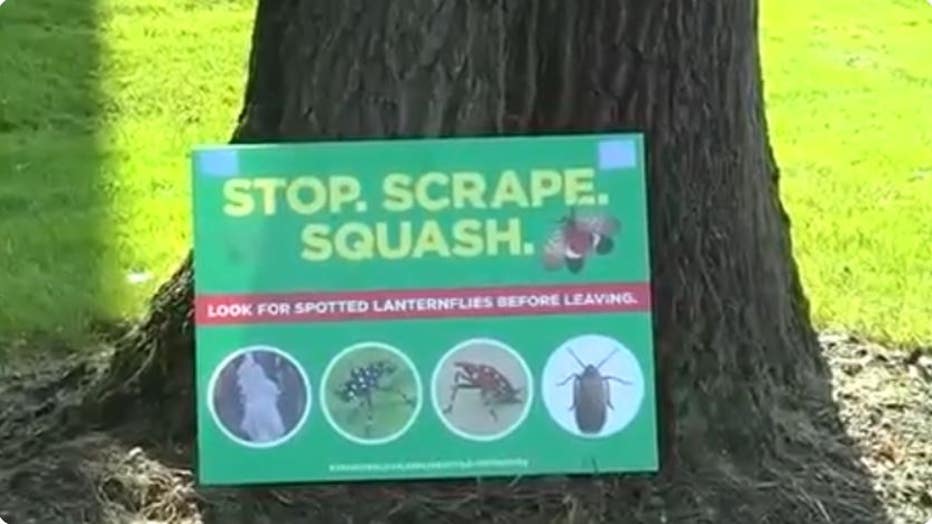 The Pennsylvania Department of Agriculture prints and posts signs warning of the pest. (FOX Weather)

The lanternfly lays a strip of 30 to 50 eggs each autumn, thus the "scrape it" advice. The female covers the eggs in a putty-like substance which eventually looks like mud. Look on plants, tree trunks, rusty metal and even cushions for the eggs.

The Camden County Mosquito Commission in New Jersey took on the challenge to keep lanternflies under control. They routinely spray with a non-pesticide chemical.

"You're spraying the tree, it's absorbed into the sap, and then it stays there in the tree system for a couple of months," explained Lauren Bonus of the Mosquito Commission. "And every time the spotted lanternfly feeds on the tree, it will die. So it's long-lasting."

Vineyards also use chemicals to combat the pest between August and November a vineyard owner told Byrne.

HOW WEATHER CAN IMPACT WINE PRODUCTION

"We see in the last couple of years, hundreds of thousands [of them]," Richard Blair of Setter Ridge Vineyards in Berks County, Pennsylvania. "The first invasion back in 2014 occurred at our first vineyard, and by 2017, the vineyard was dead." 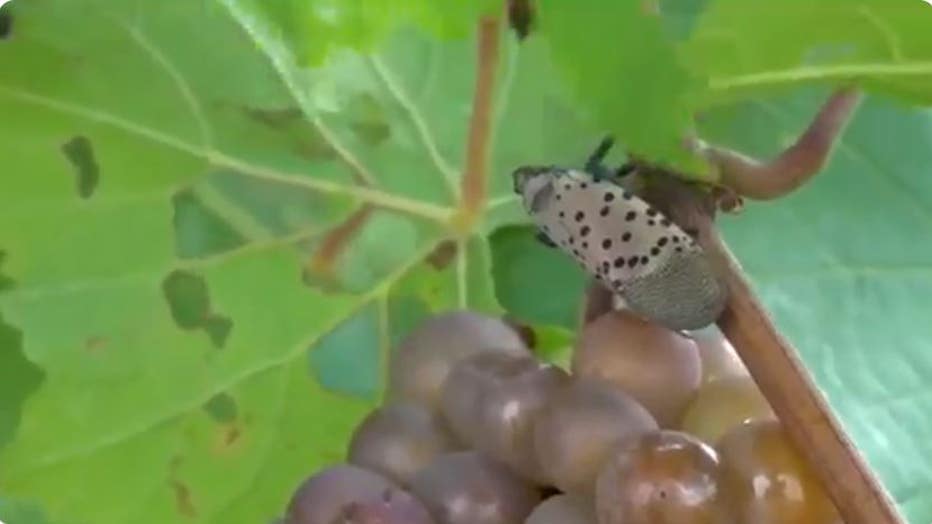 A lanternfly on a grapevine in Pennsylvania. (FOX Weather)

The spotted lanternfly is originally from Asia but was first found in a Pennsylvania orchard in 2014. Today, 12 states host the insect from New York to North Carolina and over to Indiana, according to the U.S. Department of Agriculture. Several counties in those states implemented a quarantine to try to stop the spread of the invaders on lumber, plants, firewood, motor homes and RVs out of areas known to be infested. 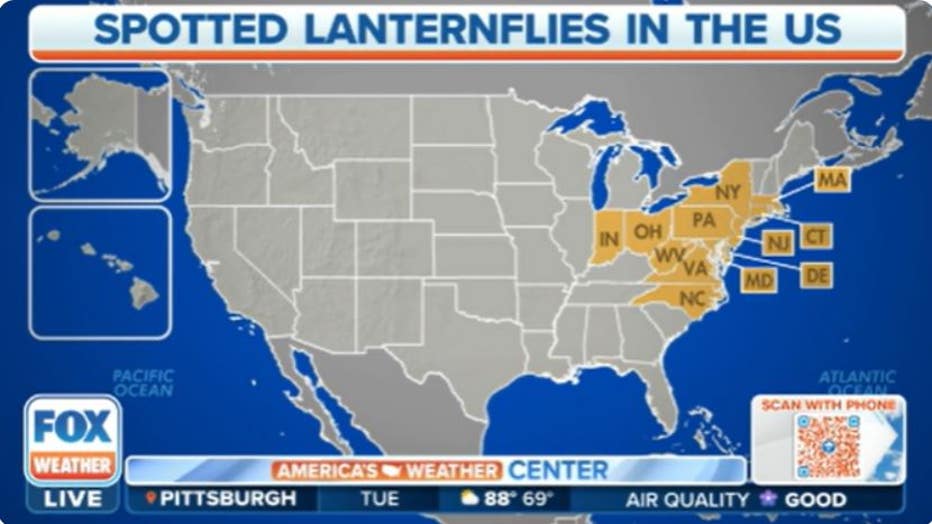 Cornell University reports that human activity is the most common cause of spread. The bugs can hide in fruit picking bins, fly into truck beds and hang onto lumber and cross county and state lines.