MILAN - Italy is making life more uncomfortable for unvaccinated people this holiday season, excluding them from indoor restaurants, theaters and museums starting Monday to reduce the spread of coronavirus and encourage vaccine skeptics to get their shots.

Italian police have been empowered to check whether diners in restaurants or bars have a "super" green health pass certifying that they are either vaccinated or have recently recovered from the virus. Smart phone applications that verify people's health pass status have been updated to prevent entry to concerts, movies or performances to those who have merely tested negative in recent days. The measures run through Jan. 15.

Authorities also imposed a requirement that at least "basic" health pass, which can be obtained with a negative test, must be used to get on local transport and to check into hotels.

In the capital, Rome, dozens of police were out at transportation hubs checking both green passes and personal identification, finding a cooperative mood among commuters. Still, a 50-year-old Roman became the first to receive a 400-euro ($450) fine after getting off the bus at the northern Flaminio station without the "basic" health pass, said Stefano Napoli, deputy chief of Rome's municipal police force. 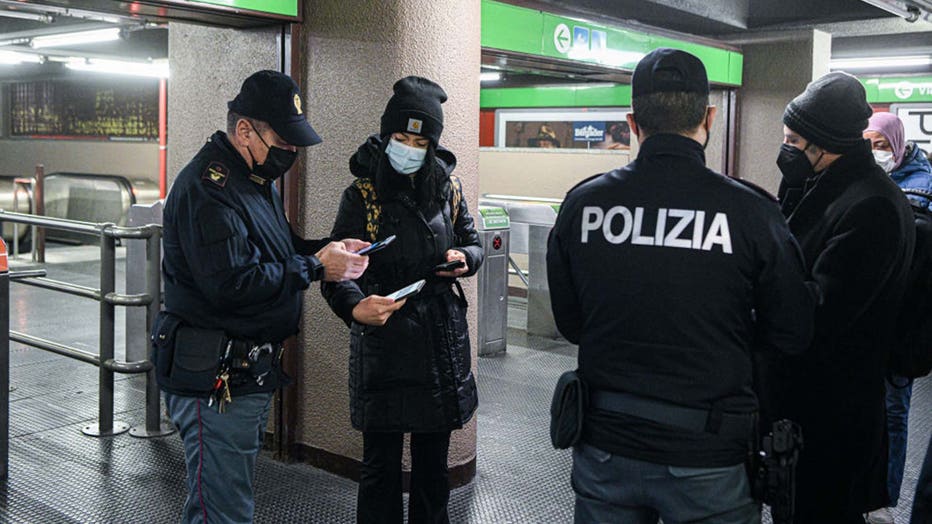 FILE - Police officers check COVID-19 health passes of passengers as new measures come into effect to fight the spread of COVID-19 and to boost vaccinations in Milan, Italy on Dec. 6, 2021.

"It was about time that they checked it,'' said Sara Ben, a Rome commuter, noting the absence of controls on the often -packed local transportation throughout the pandemic.

Milanese were enjoying the first long weekend of the season, including Tuesday’s celebration for the patron saint of Saint Ambrose and Wednesday’s national holiday, leaving commuter routes more empty than usual. But few checks were evident around the main Central Station, either for regional trains or local buses and subways.

Commuter Veronica Bianchi said her health pass wasn't checked on a regional train arriving in Milan. "But they didn't check the ticket either,'' she said.

She favors the government's moves to encourage more people to get vaccinated, and said she noted that people in their 20s like her are more apt to get the vaccine.

RELATED: Oxford scientist behind COVID-19 vaccine says next pandemic may be worse

"Frankly, I think we are tired of being locked down. I work in a young company, and it was a race to get the vaccine,'' Bianchi said.

The number of new COVID-19 infections in Italy has been on a gradual rise for the past six weeks, even before concerns arose about the new omicron variant. That's a worrying trend as Italians look forward to holiday parties and getaways to spend time with friends and family, after being deprived of such festivities last year.

While both neighboring Germany and Austria are moving toward making vaccines obligatory for certain groups, Italy is instead tightening free-time restrictions on the unvaccinated at the most convivial time of the year — while allowing those who are vaccinated go about life more or less as usual.

RELATED: Omicron variant may be less dangerous than delta, US health officials say

With an eye on the holidays, Switzerland on Monday began allowing — but not requiring — event organizers to bar anyone who hasn't been vaccinated or hasn't recovered from COVID-19. Sweden introduced a vaccination requirement for indoor events with more than 100 people starting Dec. 1.

On Monday, the Netherlands reversed itself on plans to open indoor venues to vaccinated people only, sticking instead with a 5 p.m. closure for restaurants, cinemas and other public sites.

Italy’s vaccination rate is higher than many of its neighbors, at 85% of the eligible population aged 12 and older and 77% of the total population. But people in their 30s, 40s and 50s have proved the most reluctant to get vaccinated, with nearly 3.5 million still not having received their first dose.

They are also the same age range that is now being hardest hit by the virus, according to Silvio Brusaferro, head of Italy’s National Health Institute.

RELATED: Explainer: What are the rules for travelers entering the US?

So far the delta variant remains prevalent, with only seven confirmed cases of omicron In Italy, related to two businessmen returning from southern Africa.

With the holiday shopping season heating up, many cities including Rome and Milan have ordered mask mandates even outdoors.

Public health officials say vaccinations, along with prudent public behavior including wearing masks in crowds indoors or out, are key to reducing infection levels as winter weather pushes more activities indoors. They credit Italy's relatively high level of immunization as one reason that the infection curve is not as steep as last winter, when broad restrictions were imposed with the spread of the delta variant.

"It is clear that after two years of the pandemic, we cannot easily close schools to physical classes and shut down economic activity,'' said Gianni Rezza, the health ministry's director of prevention.

"Therefore, you can try to keep the virus spread down with measures that are sustainable, and with proper use of the health pass. Then, the big bet is on the vaccinations," he said.