The James Webb Space Telescope beamed back the latest test pictures of a neighboring satellite galaxy, and the results are stunning when compared with images taken by NASA’s previous infrared observatory, the Spitzer Space Telescope.

Each of the 18 mirror segments on the new telescope is bigger than the single one on Spitzer. 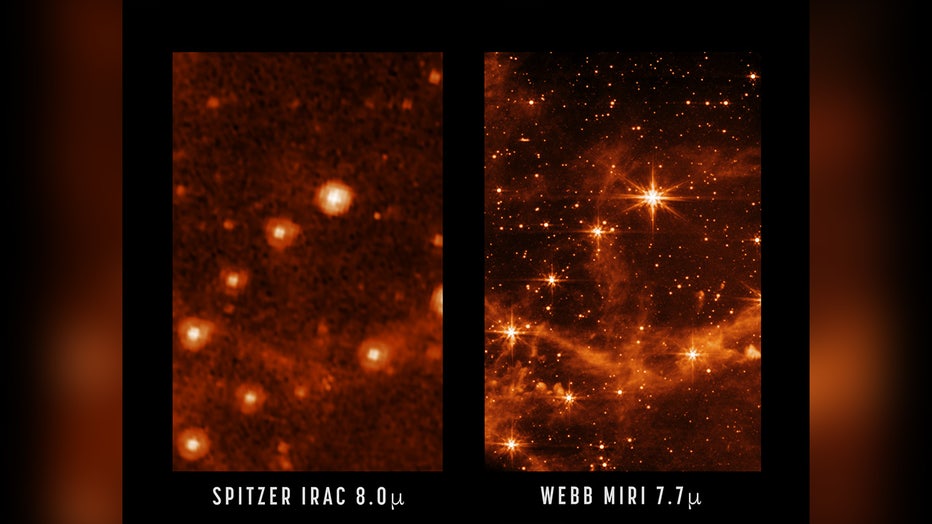 Here, a close-up of the MIRI image is compared to a past image of the same target taken with NASA’s Spitzer Space Telescope’s Infrared Array Camera (at 8.0 microns). The retired Spitzer telescope was one of NASA’s Great Observatories and the first to (NASA/JPL-Caltech (left), NASA/ESA/CSA/STScI (right))

"It's not until you actually see the kind of image that it delivers that you really internalize and go ‘wow!’" said University of Arizona’s Marcia Rieke, chief scientist for Webb’s near-infrared camera. "Just think of what we're going to learn."

Launched last December, the $10 billion Webb is the largest and most powerful astronomical observatory ever sent into space. It will seek light emitted by the first stars and galaxies close to 14 billion years ago, and keep a sharp lookout for possible signs of life.

Scientists are keeping the identity of Webb's first official target a secret.