LOS ANGELES - A necropsy performed on Kentucky Derby winner Medina Spirit, who died at the end of a workout at Santa Anita Park racetrack last December, failed to determine a definitive cause of death, the California Horse Racing Board announced Friday.

"The definitive cause of death of this horse was not determined after post-mortem examination and extensive laboratory testing," according to a necropsy done on the 3-year-old colt following his Dec. 6 death.

State officials say the necropsy found an anti-ulcer medication and a diuretic in the 3-year-old colt's system, consistent with earlier reports, but "no other drugs, heavy metals or toxicants were detected."

In a statement released shortly after the horse's death, track officials said, "Following the completion of a routine morning workout, Medina Spirit collapsed on the track at Santa Anita Park and died suddenly of a probable cardiac event according to the on-site veterinary team who attended to him."

The horse, trained by Bob Baffert, won the Kentucky Derby last May but later tested positive for the steroid betamethasone, leading to challenges to the validity of the victory. Officials at Churchill Downs announced that Medina Spirit would be disqualified if the test was confirmed, and it suspended Baffert for two years.

Baffert and his attorney have insisted that the positive test was the result of a topical ointment known as Otomax being used to treat a skin condition, not an injection aimed at enhancing the horse's performance in the race. 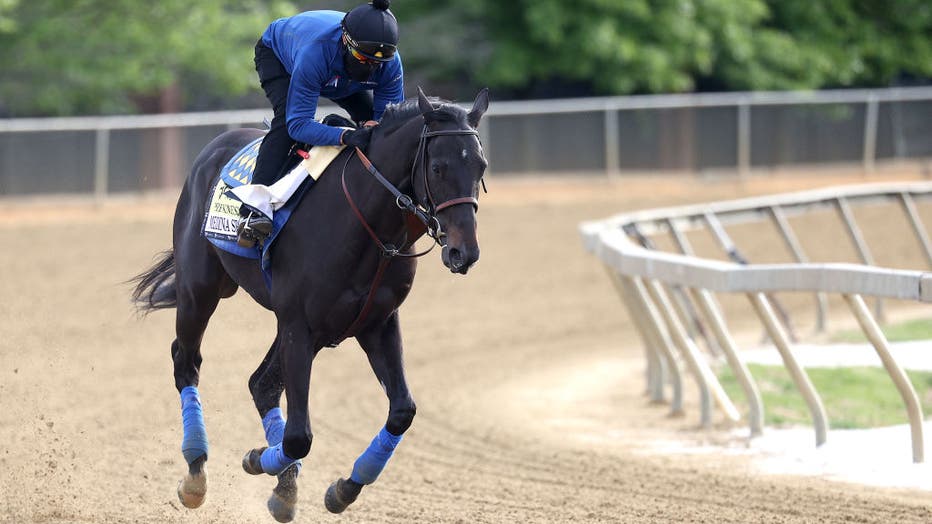 BALTIMORE, MARYLAND - MAY 12: Exercise rider Humberto Gomez takes Kentucky Derby winner and Preakness entrant Medina Spirit over the track during a training session for the upcoming Preakness Stakes at Pimlico Race Course on May 12, 2021 in Baltimore

Medina Spirit -- who earned just over $3.5 million -- had five wins in 10 starts, including the Robert B. Lewis Stakes and the Awesome Again Stakes at Santa Anita, the Shared Belief Stakes at Del Mar and the Kentucky Derby, and never finished worse than third in any race. He was second to eventual Horse of the Year winner Knicks Go in the Breeders' Cup Classic at Del Mar last November.

Medina Spirit was one of three finalists for the Eclipse Award for 3- year-old male, garnering 84 votes compared with 131 for Essential Quality, who won the award Thursday night in a ceremony at Santa Anita.

The animal-advocacy organization PETA had called for a thorough investigation of Medina Spirit's death, and urged action against Baffert, saying seven horses he was training have died in a 16-month period.

"All of Medina Spirit's veterinary records must be seized, and a thorough investigation must be conducted," PETA Senior Vice President Kathy Guillermo said in a statement soon after the horse's death. "Baffert's attorneys must not be allowed to control the narrative. PETA urges Santa Anita and Del Mar officials to bar Baffert, pending the outcome of an investigation and a necropsy."