The U.S. Supreme Court has overturned the Roe vs. Wade landmark case that legalized abortion nationwide, which will likely leading to many states enacting restrictive laws or full abortion bans. Protesters had gathered outside the Supreme Court in anticipation of the 6-3 ruling. The court went down ideological lines, with Chief Justice Roberts concurring with the five other conservative justices.

FRANKFORT, Ky. - A week after Kentucky voters rejected an anti-abortion ballot measure, the state’s Supreme Court on Tuesday weighed the constitutionality of a statewide ban approved by the Legislature in a case that seems destined to become a defining moment for abortion rights in the state.

An attorney defending the abortion ban urged the court "not to create the Kentucky version of Roe v. Wade." A lawyer for two abortion clinics challenging the ban countered that the state's voters "declined to remove protections for abortion from our constitution."

The case is the first legal test since voters in Kentucky and three other states signaled their support for abortion rights in last week's midterm elections. Kentucky voters rejected a ballot measure that would have denied abortion rights in the state's constitution.

The court hearing at the Kentucky Capitol was closed to the public amid heightened security. Mindful of the ballot's rejection, abortion rights supporters gathered near the courtroom and chanted: "No means no." 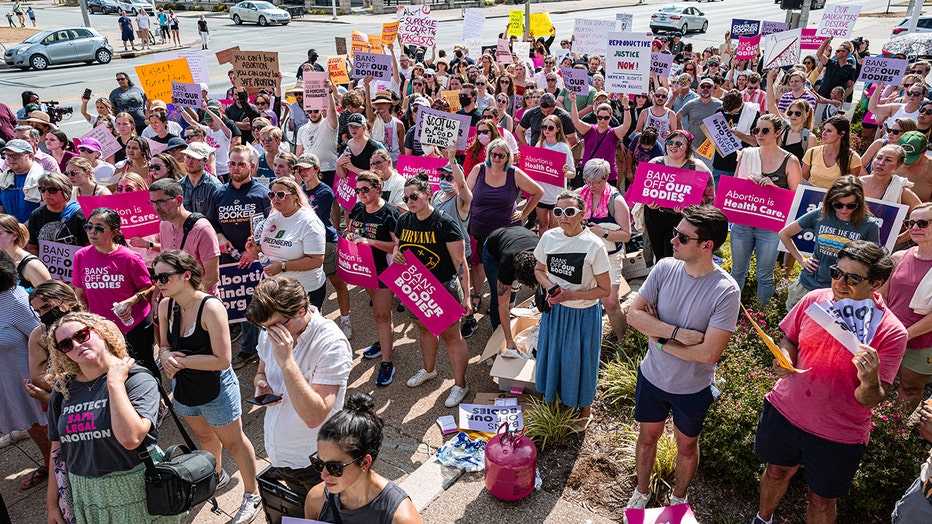 Abortion rights supporters are asking the state's highest court to temporarily block the abortion ban while the case is litigated.

The defeat of the anti-abortion amendment was raised within minutes of the hearing. Deputy Chief Justice Lisabeth T. Hughes called such ballot measures "the purest form of democracy" and pressed the attorney defending the abortion ban on why the vote shouldn't have an impact.

Solicitor General Matthew Kuhn, representing the state attorney general's office, said the measure's defeat did not change existing constitutional language, or the absence of any "historical evidence" to suggest that the state constitution protects abortion.

"When it comes to abortion, our constitution here in Kentucky is simply silent," Kuhn told the justices during the more than hourlong hearing.

RELATED: Kentucky voters asked whether there's a right to an abortion as midterms near

That means the issue of abortion access is left to the state legislature to decide, he said.

Heather Gatnarek, a staff attorney with the American Civil Liberties Union of Kentucky, said the ban has forced women "to remain pregnant against their will." She said the right to privacy has consistently been recognized as a key part of the guarantees of liberty under the state constitution.

"Our constitutional protections can be interpreted more broadly than those allowed for by the federal constitution, and that is specifically so with the right to privacy," she said.

The Kentucky justices reviewed a challenge to the state's trigger law that banned nearly all abortions, taking effect after Roe v. Wade was overturned in June by the U.S. Supreme Court. Approved in 2019, the law carved out narrow exceptions to save a pregnant woman’s life or to prevent disabling injury. There are no exceptions for rape or incest victims.

What impact, if any, the anti-abortion measure's defeat will have on the Kentucky law was a matter for intense debate in the days leading up to the hearing.

Gov. Andy Beshear, a Democrat, expressed hope that the state's highest court "will listen to the will of the people and know that the people have rejected extremism and rule accordingly."

Republican Attorney General Daniel Cameron, whose office is defending the statewide ban in court, continued to claim there's "no right to abortion hidden in Kentucky's Constitution." He said abortion policy should be left up to the state's Legislature, where GOP majorities have passed a series of anti-abortion measures in recent years. Cameron is among several Republicans vying to challenge Beshear's reelection bid in 2023.

The hearing comes a week after abortion rights supporters won every state ballot question put before voters in the midterm elections. Michigan, California and Vermont voted to enshrine abortion rights in their state constitutions. Voters in Montana rejected a ballot measure that would have forced medical workers to attempt lifesaving measures in the rare event of a baby born after an attempted abortion.

In Kentucky, the abortion case wound its way through lower courts before reaching the Supreme Court as the referendum battle played out. In July, a Louisville judge said the new, post-Roe abortion bans likely violate "the rights to privacy and self-determination" protected by the Kentucky Constitution. Judge Mitch Perry said it was not the court’s role to determine whether the state constitution contains the right to abortion, but whether the state’s restrictive laws violate constitutionally guaranteed freedoms.

The near-total abortion ban was reinstated on an appeal to the intermediate state Court of Appeals. The state Supreme Court later opted to keep the abortion ban in place while it reviews the case, leaving abortions on hold in Kentucky and forcing women who can afford the procedure to look elsewhere. A separate six-week ban that Kentucky lawmakers approved also is being challenged by the two remaining abortion clinics in the Bluegrass State — both in Louisville, the state’s largest city.

A year ago, Kentucky lawmakers added the anti-abortion amendment to the 2022 general election slate as abortion foes hoped to cut off a legal path to restoring abortion rights. The measure would have declared the state constitution didn't protect the right to an abortion.

Now that the amendment has been defeated, the stakes are enormous.

"This case is almost certainly the only realistic path to protecting abortion rights in Kentucky for the foreseeable future," University of Louisville law professor Samuel Marcosson said ahead of the hearing.

Find AP’s full coverage of the overturning of Roe v. Wade at: https://apnews.com/hub/abortion