In a report that was issued following an investigation stemming from a series of anti-Semitic incidents, officials with the U.S. Department of Education say officials with the Kyrene School District failed to protect an eighth grade student from bullying during the 2018-2019 school year. FOX 10's Marissa Sarbak reports.

TEMPE, Ariz. - Federal officials say the Kyrene School District failed to protect a student who was subjected to anti-Semitic harassment.

According to officials, the district did not protect the eighth-grader from bullying during the 2018-2019 school year.

Here's what you should know about the report.

Where is Kyrene School District?

On its website, officials with Kyrene School District say their network of 18 elementary schools, six middle schools and two K-8 schools serve students in the whole of Phoenix's Ahwatukee area, as well as students in parts of Chandler, Guadalupe, Phoenix, Tempe, and the Gila River Indian Reservation. The district's office is located in Tempe.

What did the U.S. Department of Education report say?

In a statement released on Aug. 23 (Spanish/Español), officials with the U.S. Department of Education states that its Office of Civil Rights (OCR) has determined that the district has violated Title VI of the Civil Rights Act of 1964 by "failing to respond appropriately to notice of on-going anti-Semitic harassment of a student by other students."

The report came as a result of an investigation into whether the district failed to appropriately respond to complaints that the student was subjected to discrimination at a school within the district, based on her Jewish ancestry.

The name of the school was redacted in a letter to school district officials that was posted on the U.S. Department of Education's website, but we have since learned that the student attended Altadeña Middle School, which is located in Ahwatukee.

The student was not identified.

According to federal officials, Title VI of the Civil Rights Act of 1964 refers to a legal provision that prohibits discrimination.

"No person in the United States shall, on the ground of race, color, or national origin, be excluded from participation in, be denied the benefits of, or be subjected to discrimination under any program or activity receiving Federal financial assistance," a portion of Title VI reads.

"As a recipient of Federal financial assistance from the Department, the District is subject to these laws and regulations," read a portion of a letter sent to Kyrene School District Superintendent Laura Toenjes by federal officials.

In the letter to Toenjes, federal officials said harassment that "creates a hostile environment for individuals with a shared ancestry, such as students of Jewish descent, is a form of national origin discrimination under Title VI."

(The following section contains language or content that some may find offensive or distressing. Discretion is advised.)

Many parts of the letter to Toenjes, as posted on the U.S. Department of Education's website, were redacted, but it was stated that during a meeting between the victim and Altadeña Middle School's principal in 2019, the victim revealed that since 2018, nine students, identified only as "Students A-I"," harassed the victim at school and via social media by calling her names like:

"[The victim] also said the students were making jokes about the Holocaust, speaking with a German accent, and marching and saluting like Nazi soldiers," read a portion of the letter.

The letter also contains other instances of harassment involving offensive references to Jewish people and the Holocaust.

"The Complainant provided the Principal a list of the alleged conduct by e-mail, including videos of the students engaging in the conduct and social media messages she obtained from [the victim," read another portion of the letter. The complainant's identity was not released.

According to the statement released on Aug. 23, the harassment lasted over a period of five months.

What did school officials initially do?

The school principal, according to officials, later spoke with Students A-I, and the Phoenix Police Department was contacted to report the alleged harassment. Phoenix Police reportedly reviewed the social media videos in 2019, and met with the school's principal and the complainant.

The school's principal, according to the letter sent to Toenjes, spoke with one former employee, identified only as "Teacher J."

The letter states that in an interview with OCR, one of the victim's teachers, identified only as ‘Teacher A,’ said she was not interviewed by the school's principal.

Students A-I, according to the letter, were later disciplined for breaking school district policies that ban ethnic/racial/hate speech.

"According to the students’ discipline records, one student received in-school intervention (ISI) and the others received a combination of ISI and off-campus suspension (OCS)," read a portion of the letter.

What did the school's investigation find?

According to the letter, the school's principal sent an e-mail to school staff members in 2019 regarding hi investigation into the victim's allegations.

However, the letter noted that there is no evidence of the principal, as part of his investigation, interviewing other students to determine whether they had experienced harassment.

What happened to the victim?

The complainant, officials with OCR said, had a meeting with the school's principal, as well as the District’s Director of School Effectiveness and the District’s Superintendent, at some point in 2019, where she once again expressed her concern that the district has yet to respond to her request regarding the creation of a safety plan for the victim.

"According to the Complainant, during the meeting, the District administrators repeatedly asked her what actions she wanted the District to take to address her safety concerns, but they failed to present any new safety options other than to offer to implement no-contact orders. In contrast, the District asserted that the administrators, in addition to offering no-contact orders, offered to provide counseling services and to maintain the class schedule changes it earlier provided to the Student," read a portion of the letter.

The aforementioned e-mail, according to the letter, was forwarded to the school principal by the complainant. The principal later changed the victim's grade to pass/fail. The victim later began attending school in another school district, but the letter states that she was "unable to overcome the academic deficits she experienced."

What did OCR's investigation ultimately find?

According to the letter, the OCR found that the district "failed to implement measures to address the hostile environment that [the victim] experienced, as it failed to develop and implement a safety plan for the Student."

The OCR, according to the letter, also found the following:

What is being done to address the problem?

According to the Department of Education's website, there is a resolution agreement in place between the school district and federal officials, which includes the following:

Additionally, the agreement states that the school district will:

What is Kyrene's current policy on acts of harassment?

The district's family handbook states that students are "prohibited from bullying, harassment, or intimidation on school grounds, school property, school buses, at school bus stops, at school-sponsored events and activities, and through the use of electronic technology or electronic communication equipment on school computers, networks, forums, or mailing lists."

Additionally, Section JICK of the district's Board Policy Manual details what is considered to be harassment, which includes acts of harassment that "may be related, but not limited to, race, color, religion, sex, age, national origin, disability, sexual orientation, and gender identity and expression."

What are people saying about the incidents?

On Aug. 23, the district released a statement to FOX 10, which reads:

"Kyrene School District has reached a resolution with the U.S. Department of Education’s Office for Civil Rights (OCR) regarding the anti-Semitic harassment of an 8th grade student on one of our campuses in the 2018-19 school year.

Kyrene holds the safety of students, both their physical safety and their social-emotional wellbeing, as the highest priority. Superintendent Laura Toenjes and the Kyrene Governing Board are dismayed that any student would be made to feel unsafe or unwelcome on a Kyrene campus.

‘As a person of Jewish faith, I was deeply affected by this investigation,' said Superintendent Toenjes. 'I will work very closely with our Board to ensure every student of every faith, every race, and every background feels safe, valued, and respected inside our schools.’

Action was taken in the 2018-19 school year to address the complaint with both students and staff, and students involved were held accountable for their in-school actions. However, the District is always striving to strengthen its commitment to non-discrimination, and much of the work required in the resolution is already underway in Kyrene. In May of this year, the Kyrene Governing Board approved the District’s first Diversity, Equity, and Inclusion policy (ACB) so that every student in Kyrene will have a sense of belonging, without bias or discrimination.

‘This work would happen regardless of the resolution in front of us today, but we are grateful for the opportunity to reflect, and we appreciate the guidance that will be offered by the Office for Civil Rights,’ said Superintendent Toenjes.

The District has already begun developing a plan to directly address the resolution, and later this year, Kyrene will begin a comprehensive review of all District policies with an equity lens to ensure the District’s commitment to inclusion is consistent throughout its practices."

In a separate statement, Toenje addressed the incident, which reads, in part:

"As a person of Jewish faith I was deeply affected by the investigation. I will work very closely with our board to ensure every student of every faith, every race, and every background feels safe valued and respected inside our schools."

In the aftermath of the report's release, we spoke with Jolie Brislin, Regional Director of ADL Arizona.

ADL Arizona is now asking for the district to intervene with action, during a time when the organization has seen an overall increase in antisemitic rhetoric and behavior.

"What we saw happen to this girl should be unacceptable to all of us, and we should all be standing up and saying no hate in Arizona," Brislin said. 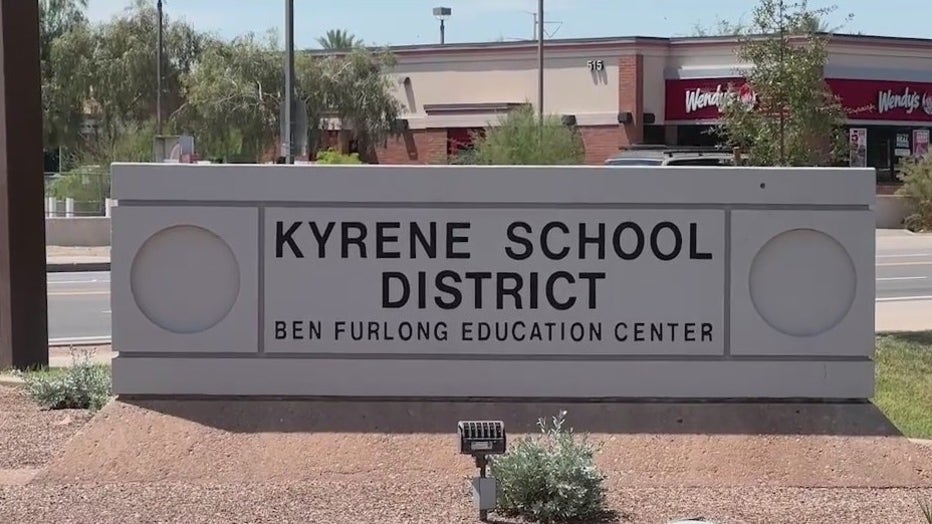