LOS ANGELES - In one of the darkest nights in Los Angeles, crowds defied curfew orders set forth by local officials and instead vandalized, looted, and destroyed several businesses.

Police used tear gas to break up the remaining 200-300 people gathered at Rodeo and Santa Monica Boulevard around 8 p.m., after the gathering was declared an illegal assembly.

RELATED: Curfew issued for all of Los Angeles as Mayor Garcetti urges protesters to stop the violence

What began as a protest in Beverly Hills over the in-custody death of George Floyd led to looting of the Alexander McQueen clothing store on Rodeo Drive, attacks on three police vehicles and multiple incidents of vandalism.  There was also an attempt to loot the Gucci store. 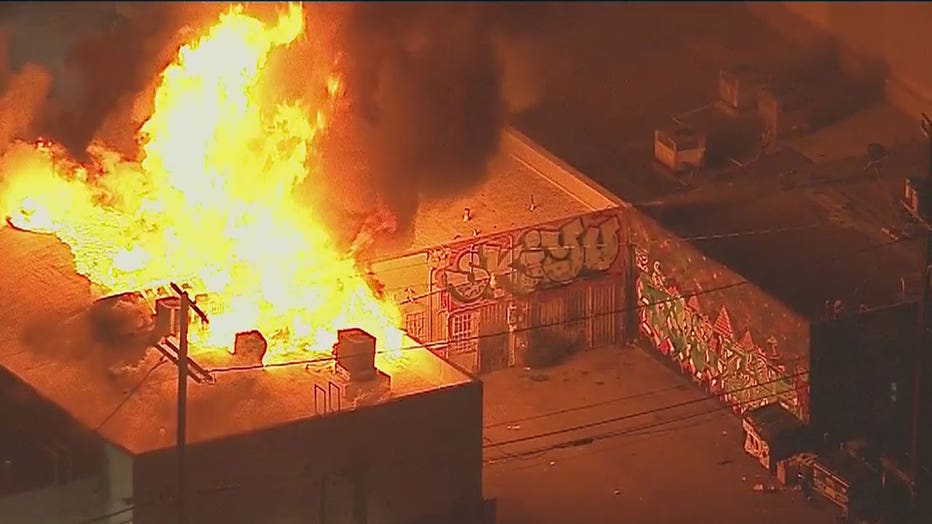 Fire crews battle several blazes Saturday evening, including a massive fire burning at a building at Melrose and Fairfax. That building in the 7600 block of West Melrose Avenue, believed to be a shoe/apparel store.

Many of the crowds ignored social-distancing recommendations.

If you're in pain, I feel that pain. If you're angry, I get it. But this has moved from a being a protest, to vandalism to destruction, and nobody should be out there making a mistake. It's not just about May 30th; it's something you'll live with and that we as a community will live with long beyond.

Listen to Garcetti's full interview in this video (while we aired footage of the destruction happening in the Fairfax area):

Right before the 8:00 p.m. curfew was established by Mayor Garcetti, the Whole Foods grocery store was looted as crowds broke through the doors to take whatever items they could. Moments later, the crowd rushed out of the building, as officers arrived to remove the crowd from inside.

Whole Foods on 3rd Street near the Grove looted during protests

A Target store was looted in the Fairfax District, with people seen running in and out of the store with their arms full of items and then driving away from the scene. The Target store is at the Beverly Grove shopping center.

A group of apparent would-be looters went to the second floor of the Beverly Center but quickly turned around and exited en masse.

RELATED: Continuing coverage of the death of George Floyd

A window was shattered at a Moscot store, which sells eyeglasses, and is being looted at 7977 Melrose Ave., in the Fairfax District, where several fires burn, and protestors are throwing objects at firefighters, attempting to keep them from putting out the flames. An Adidas store was also being looted.

Looting was going on downtown where a Walgreens store at 4th and Hill streets was raided by a crowd of looters.

Another store that was raided by dozens of looters in the 500 block of North Fairfax Avenue was Flight Club, a high-end consignment store where rare sneakers are sold.

The Los Angeles Fire Department tweeted that they will work as long as it takes to make sure the community is safe during the ongoing unrest:

Thousands of protesters marched through the city streets to call attention to the devastating circumstances surrounding the death of Minneapolis resident George Floyd. Floyd died Monday after being handcuffed and pinned to the ground by a white Minneapolis Police Department officer, Derek Chauvin, who pressed his knee on the 46-year-old man's neck for several minutes while three other
officers looked on.

Video footage of the arrest, in which Floyd is heard saying "I can't
breathe," spread widely online, and all four officers were fired.

Chauvin was charged with third-degree murder and second-degree
manslaughter on Friday.