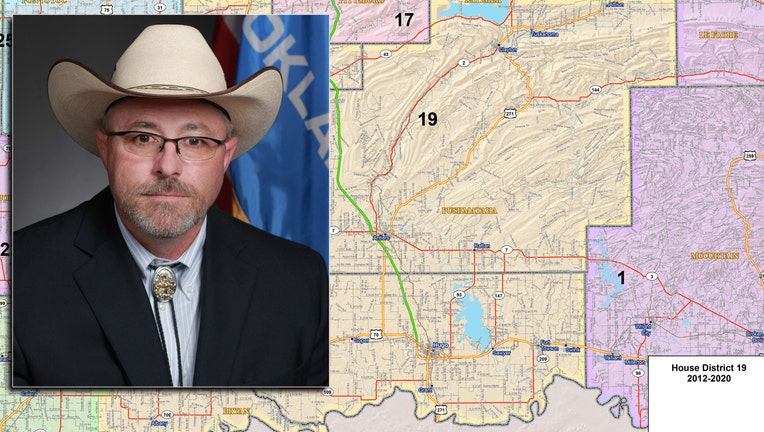 Oklahoma state Rep. Justin Humphrey and his district. (Via okhouse.gov)

OUACHITA MOUNTAINS, Okla. - A state lawmaker in Oklahoma is targeting Bigfoot — the mythical, ape-like creature that has captured the imagination of adventurers for decades.

Rep. Justin Humphrey, a Republican member of the House, has introduced a bill that would create a Bigfoot hunting season. His district includes southeast Oklahoma's heavily forested Ouachita Mountains, which hosts a Bigfoot festival every year.

In a press release, Humphrey acknowledges that he has worked on "more serious matters, such as censorship, protecting the beef industry," but that tourism is also important to his district. So having a season to hunt Bigfoot "will just draw more people to our already beautiful part of the state," he said.

But the cowboy-hat-and-bolo-tie-wearing lawmaker doesn't want anyone to kill Bigfoot so his legislation would establish rules for trapping the creature instead. He also wants to secure a $25,000 bounty for the first adventurer who manages to trap the elusive bipedal beast.

RELATED: What the FBI concluded about Bigfoot research from the 1970s

The thing is, the Oklahoma Department of Wildlife Conservation, which oversees hunting in the state, doesn't recognize Bigfoot as an actual real thing that can be hunted. Spokesman Micah Holmes told television station KOCO that the agency uses science-driven research in setting its hunting slate.

That doesn't seem to be deterring Humphrey, though.

"Again, the overall goal is to get people to our area to enjoy the natural beauty and to have a great time," he said, "and if they find Bigfoot while they’re at it, well hey, that’s just an even bigger prize."

This story was produced from New York City with The Associated Press.