‘Lift Every Voice and Sing:’ The ‘Black National Anthem’

“Lift Every Voice and Sing” began as a poem written by a school principal. It grew to become known as the “Black National Anthem.”

LOS ANGELES - The Black national anthem was born more than a century ago, but the popular hymn within the African American community called “Lift Every Voice and Sing” has resurrected a beacon of hope during nationwide protests.

In recent weeks, countless rallies were held from D.C. to Seattle with arm-locked protesters of different races reciting the song’s lyrics while marching against police brutality of unarmed Black people. The demonstrations throughout the U.S. were ignited by the killing of George Floyd, who died after a Minneapolis police officer pressed a knee into his neck for several minutes.

Some marches were peaceful, while others turned violent. But one common thread at protests were people chanting the anthem‘s long-lasting message of faithfulness, freedom and equality.

“I saw whites singing that song saying ‘No justice, no peace’ and 'Black Lives Matter.' It's something I didn't see early in my career or even 15 years ago," recalled the Rev. Al Sharpton, referring to protesters in Minneapolis in the aftermath of Floyd's death. “You got to see people other than us appreciating our song, our anthem. This is just not a moment. This is a real movement.”

RELATED: 120 years later, 'Lift Every Voice and Sing' still rings through the halls where it was first performed

Growing up, Sharpton said he learned self-identity through the anthem, which was written as a poem by James Weldon Johnson before his brother, J. Rosamond, turned it into music. The song was performed for the first time in 1900, not long after it was written.

The NAACP dubbed “Lift Every Voice and Sing” as the Black national anthem in 1919. The decision came more than a decade before “The Star-Spangled Banner” was adopted as the national anthem of the U.S.

During the civil rights movement, the song was popular during protests with the likes of “We Shall Overcome” and “Amazing Grace." The latter was written by former slave trader John Newton, but the song helped define racial equality.

“The fact that this song could survive us going from the back of the bus and the outhouse to the Truman Balcony at the White House, it shows that this song really resonates in our hearts,” he said. “Very few songs would last through those kinds of changes in Black America. That’s why it’s a great barometer to the cultural shift.”

Protesters are certainly making the song heard. In Dallas, hundreds flocked to the plaza where John F. Kennedy was shot in 1963 to march before collectively taking a moment to sing the song. Protesters sang the song last month at the historic Lincoln Memorial in Washington, D.C. The same happened in Los Angeles, Chicago, Baltimore and Minneapolis.

“The song is a refreshment and renewal of my faith,” said Andrew Young, the civil rights leader and former Atlanta mayor and U.S. ambassador to the United Nations. He said the singing of the song at protests shows how “desegregation of America is really the integration of cultures, ideals, energies and spirituality.” 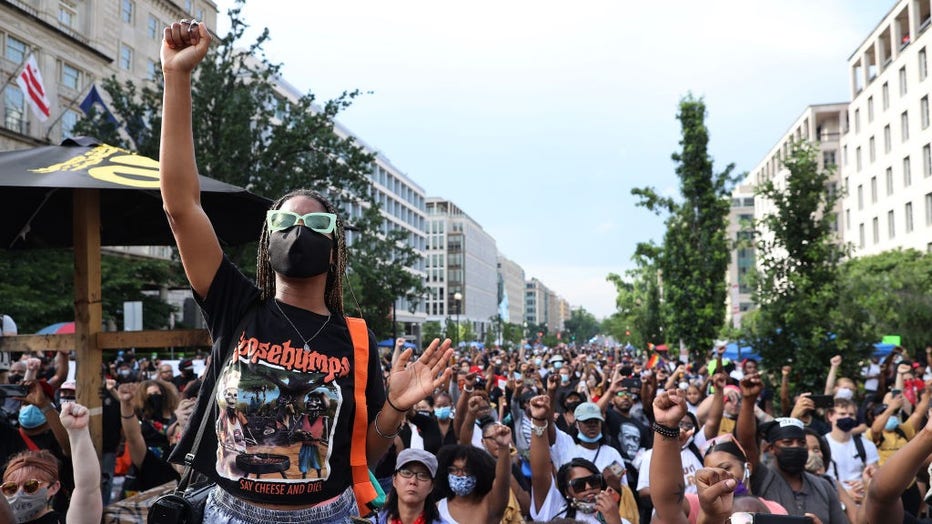 People put their fists in the air as Lift Every Voice and Sing is performed at the intersection of H St NW and 16th Street NW near the White House, an area renamed Black Lives Matter Plaza, while celebrating the Juneteenth holiday June 19, 2020 in Wa

Young has known the song’s lyrics since kindergarten and even recited every word during a recent interview. He believes the Black anthem is a more “powerful and patriotic” song than America’s national anthem, which was written by a slave owner who made a painful reference to slavery in its little-known third stanza.

“It’s much more applicable to the United States as we would love it to be more than 'The Star-Spangled Banner,’” Young said of the Black anthem.

Along with the protest, the staying power of “Lift Every Voice and Sing” into broader audiences can also be credited to the biggest entertainers and political figures who have referenced it.

Beyoncé performed the song in front of a mostly white audience at the Coachella Valley Music & Arts Festival in 2018. The late Rev. Joseph Lowery began his benediction reciting the song’s third verse at the inauguration for President Barack Obama in 2009; and musicians Mike Phillips and West Byrd sprinkled in snippets of the song while playing the national anthem at NASCAR’s 2020 Pocono 350 on Sunday.

The NFL will play “Lift Every Voice and Sing" before each game during Week 1, a person familiar with the discussions told The Associated Press. It’ll be played first when the Super Bowl champion Kansas City Chiefs host the Houston Texans to kick off the NFL regular season on Sept. 10.

Last month, Democratic presidential hopeful Joe Biden released the “Lift Every Voice” plan, which is a reference to the song. The plan proposes to address issues in the Black community, including “systemic misconduct” in police departments and prosecutors' offices.

The Rev. Markel Hutchins said Biden's reference to the song and hearing white Americans singing the lyrics has given him “hope and confidence, although we’re in a dark place as a nation today.”

“There’s new inspiration and motivation in America today for people of every walk of life, every race, every culture and every orientation,” he said.

Some NBA and collegiate teams played the song at games during Black History Month years ago, thanks to Eugene Williams. The retired Howard University professor lobbied for teams to play the song in February.

Williams wants the song to be played in all U.S. sporting venues, but Young and Hutchins are unsure if that should be the case. Hutchins thinks the song should be sung with pride and not taken lightly.

“I think the song is just too sacred to be reduced to what 'The Star-Spangled Banner’ is,” he said. “The ‘Star-Spangled Banner’ is patriotic and inherently and uniquely American. It represents the complexities of America. But ‘Lift Every Voice and Sing’ is much more sacred on my view and should be handled as such.”

Sharpton confidently said the song should be performed at big venues for sporting events and beyond.

“It should because it recognizes the heritage and the true authentic America struggle," he said. “There's always been the controversy about race being involved in the national anthem. Here's an authentic anthem coming out of the American experience that does not denigrate the country, but also uplifts the struggle and affirmation of people that have been part of this country."