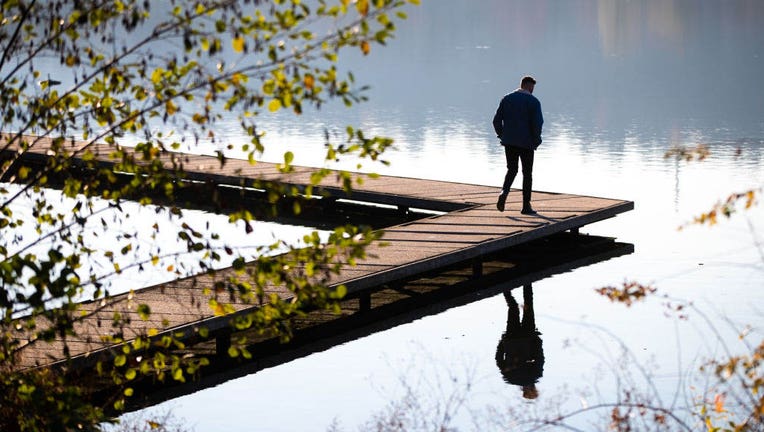 A file image shows a man walking on a dock by the water on Nov. 28, 2020. (Photo by Christoph Schmidt/picture alliance via Getty Images)

MONTREAL - As many continue to social distance due to the coronavirus pandemic, there will undoubtedly be many people alone for the holidays. Researchers behind a large study have found that loneliness might actually help build and strengthen parts of the brain tied to the imagination — aiding those facing isolation.

Areas of the brain responsible for inner thoughts, such as reminiscing, future planning, imagining and thinking about others, had become strengthened and gray matter volume was greater in those who reported feeling lonely, according to the study published Dec. 15 in the journal Nature Communications.

The team of researchers at McGill University in Canada analyzed brain scans from 40,000 middle-aged and older adults who volunteered to be part of the UK Biobank, an open-access database available to researchers around the world.

The team then compared the data of participants who reported often feeling lonely with those who did not.

Researchers found several differences in the brains of lonely people, centered in the default network — which is a set of brain regions involved in inner thoughts such as imagination. Not only did the team find that default networks of lonely people were more strongly wired together and gray matter volume in this area was greater, but they also found a correlation between loneliness and differences in the fornix.

In the brain, the fornix is a C-shaped bundle of nerve fibers that carries signals from the hippocampus to the default network and plays a role in memory. In lonely people, the structure of this fiber tract was better preserved.

Because the default network is used for remembering the past, envisioning the future, or thinking about a hypothetical present, the study authors said their findings may be because lonely people are more likely to use imagination, memories of the past or hopes for the future to overcome their social isolation.

"In the absence of desired social experiences, lonely individuals may be biased towards internally-directed thoughts such as reminiscing or imagining social experiences. We know these cognitive abilities are mediated by the default network brain regions," said Nathan Spreng from The Neuro (Montreal Neurological Institute-Hospital) of McGill University, and the study's lead author.

"So this heightened focus on self-reflection, and possibly imagined social experiences, would naturally engage the memory-based functions of the default network," Spreng added.

Grandma’s need for speed fulfilled after months of isolation

Loneliness has been recognized as a major health problem, linked to impacting physical and mental health and even overall life expectancy. Previous studies have shown older people who experience loneliness have a higher risk of cognitive decline and dementia.

The team said understanding how loneliness manifests itself in the brain could help scientists prevent neurological disease in the future and develop better treatment.

"We are just beginning to understand the impact of loneliness on the brain. Expanding our knowledge in this area will help us to better appreciate the urgency of reducing loneliness in today’s society," said  Danilo Bzdok, a researcher at The Neuro and a Canada CIFAR AI Chair at Mila – the Quebec AI Institute, and the study’s senior author.