A football super fan in Kansas City geared up for the big game by updating his yards home field with end zones and the Super Bowl LV logo on Friday, February 5.

KANSAS CITY, Mo. - One Kansas City Chiefs fan decided that since he can’t go to Super Bowl 2021, he’d bring the game to his back yard.

Nate Bukaty, a sports radio commentator, created his own "Bukaty Stadium" and painted his yard to resemble a miniature version of the Chiefs’ own Arrowhead Stadium.

Bukaty posted a sped-up video to Twitter on Feb. 5 showing how he painted his lawn with great detail. He even made sure to include the 50-yard line and the Super Bowl LV logo."Bukaty Stadium is now officially ready for Super Bowl LV," the tweet read. 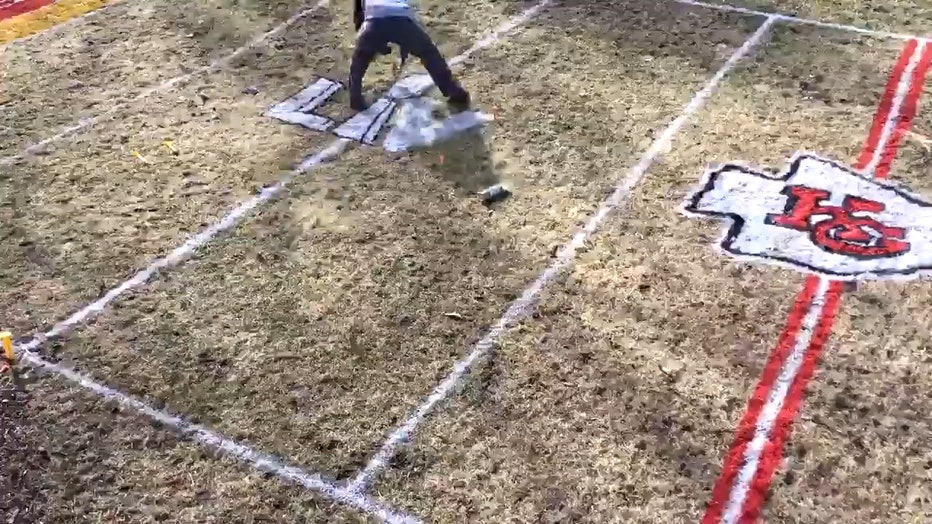 RELATED: Patrick Mahomes: What to know about the rising NFL star playing in Super Bowl 2021

Super Bowl 2021 is set to be an epic battle between the Tampa Bay Buccaneers and the Kansas City Chiefs.

Excitement has been building for the much-anticipated matchup between the NFL’s most accomplished quarterback, Tom Brady, 43, and the league’s biggest rising star, Patrick Mahomes, 25.

The game will take place on Feb. 7 at Raymond James Stadium in Tampa, Florida and the official kickoff starts at 6:30 p.m. ET.

The performances will be star-studded with Jazmine Sullivan and Eric Church duetting the national anthem and H.E.R. will be performing "America the Beautiful."

The Weekend will be headlining the 2021 Pepsi Super Bowl Halftime Show.

RELATED: Tom Brady: What to know about the NFL’s most accomplished quarterback

Additionally, the NFL plans to allow 22,000 fans to attend the major sporting event, 7,500 of whom are vaccinated health care workers. That’s about one-third of what Tampa’s Raymond James Stadium normally holds.

The invitations to health care workers was a gesture of gratitude as they battle the ongoing COVID-19 pandemic.

"On behalf of Floridians and football fans across the nation, I'd like to thank the many men and women who worked hard to make this game a reality, especially our frontline health care workers," Florida Gov. Ron DeSantis said in a press release about the plan.

RELATED: Super Bowl 2021: Who will perform in the halftime show?

FOX 13 News and Storyful contributed to this report.