LOS ANGELES - A massive marijuana bust in the Antelope Valley resulted in 16 tons of illegal marijuana being seized.
It’s described as one of the largest marijuana eradication operations for the history of the Los Angeles County Sheriff’s Department.

During a press conference Wednesday, Sheriff Alex Villanueva announced the details from a multi-agency operation targeting illegal marijuana grows in the Antelope Valley. 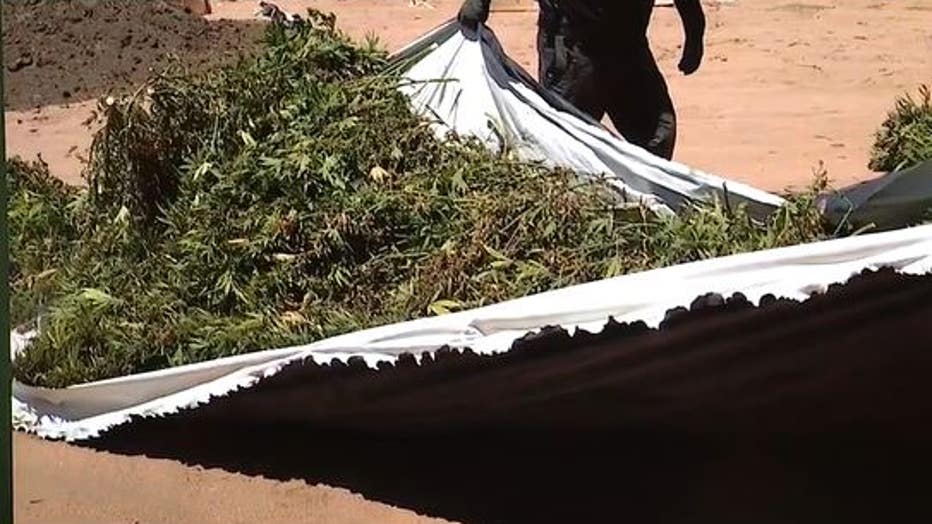 The estimated street value of the products seized is $1.19 billion.

It's one of the largest marijuana busts for the history of the Los Angeles County Sheriff’s Department. over 131 people have been arrested and $1.19 billion worth of marijuana have been seized.

Villanueva says there has been a drastic increase of illegal grows in the Antelope Valley and most of them are tied to Mexican drug trafficking organizations as well as Asian and Armenian crime groups.

"What we want to do is send a clear message to the cartels and anyone doing illegal operations in the High Desert, your days are over and we are coming for you," Villanueva stated.

He says many of the people involved in the illegal grows are undocumented.

In 202, narcotics detectives identified 150 illegal outdoor marijuana grows in the Antelope Valley, however this year, investigators found more than 500 grows. He also stated that in 2020, the sheriff's department seized over 1 ton of marijuana, whereas during this operation alone they seized over 16 tons.

Illegal grows around Palmdale and Lancaster have resulted in increased crime. In addition to crime, the illegal grows pose a huge threat to the surrounding wildlife and environment. The sheriff’s department has also seen an increase in water theft, which has threatened the water supply for residents as well as local farmers.

"The thefts occur from fire hydrants and unpermitted water wells that are being drilled on the grow sites and they are also being stolen from the farmers themselves."

According to Villanueva, 150 million gallons of water was used to bring the plants to harvest… there are four harvests per year.