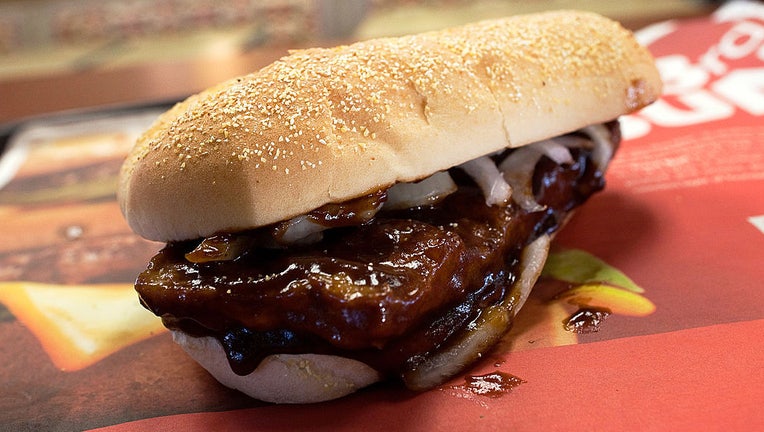 FILE- A McRib sandwich is displayed at a McDonald's restaurant on November 3, 2010 in San Francisco, California. (David Paul Morris/Getty Images)

One of McDonald's most popular sandwiches is making its triumphant return to menus again, but only temporarily.

Customers can get their hands on the tasty McRib sandwich starting on Halloween (Oct. 31) until Nov. 20, when it officially says goodbye forever. You can place an order on the McDonald’s app for delivery or pick up, the company posted on their website.

The sandwich has seasoned boneless pork dipped in a tangy barbecue sauce, topped with onions and dill pickles complimented by a toasted bun.

"The mcrib is coming back 10.31 but this is its farewell tour," McDonald's tweeted Monday.

In Sept. 2021, McDonald’s announced on Twitter that the savory sandwich returned to menus on Nov. 1 of that same year.

Referencing a popular meme, the company shared a message that started with a blank caption that was followed by a caption of McDonald’s saying, "I think it’s time to bring the McRib back 11.1."

The McRib has built up a loyal following among McDonald’s patrons. While the sandwich is considered an iconic part of the restaurant’s history, it usually only appears as a temporary or seasonal item on the restaurant’s menu.

Two years ago, Fox News reported on the McRib’s return in 2019. That year, the sandwich returned in October. Typically, the McRib pops up on menus during the fall.

FOX 29 Philadelphia and FOX News contributed to this story. This story was reported from Washington, D.C.