U.S. military service members placed flags at gravestones in Arlington National Ceremony in Virginia, on May 27, to mark Memorial Day, which honors those who died while serving in the armed forces.

LOS ANGELES - May 31 marks Memorial Day and what a great way to welcome the summer and honor America’s troops with educational movies and shows that highlight the amazing strength and hardships endured by the United States armed forces.

Tubi has hundreds of documentaries and movies bsaed off true events that show inspiring, heartbreaking and even tragic stories about U.S. soldiers.

Here are just a few of the hundreds of titles about the people who proudly represent and protect America. 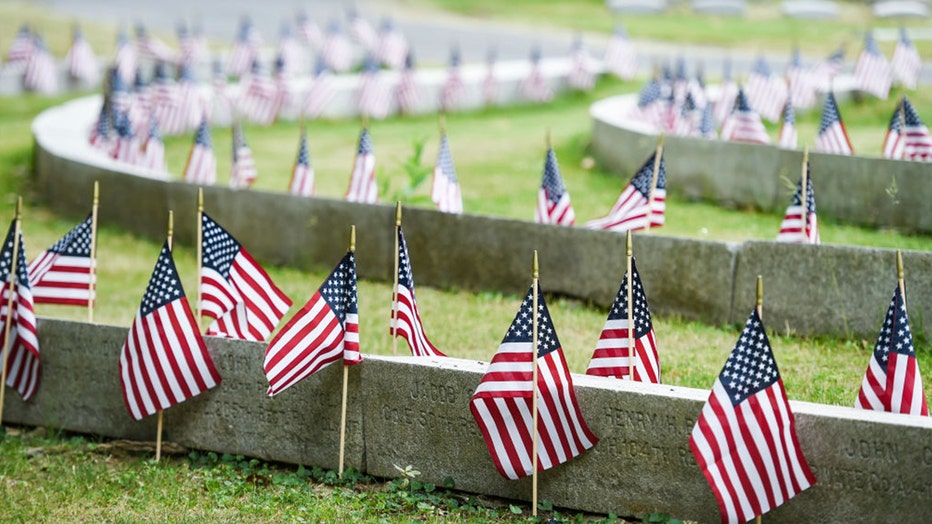 FILE - Flags on markers at the GAR (Grand Army of the Republic) memorial in Charles Evans Cemetery to soldiers from the Union Army, Navy, and Marines in the United States Civil War. (Ben Hasty/MediaNews Group/Reading Eagle via Getty Images)

Soldier's Stories (2014): Starring Mickey Rooney and Matthew Young
"A look through the eyes of a soldier at the little-known 1916 battle that took more American and Candian casualties than any battle in World War II."

Black Hawk Down: The Untold Story (2019)
"The harrowing 1993 rescue of U.S. soldiers shot down inside Black Hawk helicopters in Somalia, leading to the heaviest combat since the Vietnam War."

Legend of the American Sniper (2017)
"This gritty true story focuses on the value of snipers during wartime, who fearlessly hunt their enemy with a rifle, their weapon of choice."

Desert Fury (2018): Starring Monré Aucamp, Maxine Classen, Gerald Copeland, Sharne Crezwill and Basil Dadswell.
"When their Desert Storm unit is captured by Iraqi forces, two US soldiers with a volatile past must work together with other POWs to escape."

War in the Pacific: Eagle Against the Sun (2015) (Season 1)
"Dive into the War in the Pacific like never before with this 10-part series chronicling the fight from prior to Pearl Harbor up until the last bomb was dropped. Featuring combat footage and interviews with veterans from both sides, learn about their experiences and perspectives from America's war with Japan as 2015 recognizes the 70th Anniversary of V-J Day."

RELATED: Get your fill of nostalgic TV classics on Tubi