Dignitaries, friends, and loved ones gather in at the Orpheum Theatre in Downtown Phoenix on Nov. 12 to remember the life of former Arizona Grant Woods, who died suddenly in late October at the age of 67. FOX 10's Brian Webb reports.

PHOENIX - Arizona is mourning the death of its former attorney general, Grant Woods.

He passed away at the age of 67 on Saturday, Oct. 23. His death was unexpected, said his wife Marlene Galan Woods.

"Grant was the love of my life. My best friend. My heart is broken. I just cannot believe he is gone. I can’t believe our time together is over. He was the best husband, the best father anyone could have wished for," his wife said. "I am so proud of the man he was, public servant, advocate for the everyday person, lover of music and stories and sports. He made me a better person. I can’t even fathom our lives without him. But we are strong, and a close family and we will work hard to honor his life."

Woods was a longtime fixture of Republican politics in the state and was a top aide to the late Sen. John McCain when he was a congressman, serving as his first chief of staff in the 1980s. He delivered a eulogy alongside now-President Joe Biden at McCain’s memorial service in Phoenix.

Woods served as attorney general from 1991-1999, helping lead negotiations on a massive nationwide settlement with tobacco companies that continues to help fund the state’s Medicaid program. The state has received more than $1 billion since the 1998 settlement agreement.

After leaving office, he returned to private practice and was a highly successful civil litigator in anti-trust, fraud, breach of contract and medical malpractice cases. He was also often tapped as a special prosecutor in public corruption cases and tried murder cases.

The one big blemish on his decades-long career came in 2009, when Woods was hired to look into allegations that the Fiesta Bowl employees were pressured into making political contributions.

After a brief investigation, Woods said he found no evidence of wrongdoing. That turned out to be completely wrong, and the bowl in 2011 fired its longtime top executive and almost lost its spot in the college football Bowl Championship Series after it was proven the executive had overseen an illegal campaign donation scheme and doled out free tickets to politicians.

Woods left the Republican Party shortly after McCain’s 2018 death, furious and dismayed by Trump’s treatment of his longtime friend and the party’s direction. He considered a run for U.S. Senate in 2020 to try to unseat then-Sen. Martha McSally and help to be a foil to Trump, but decided his status as a former Republican would have been a liability in the crowded Democratic primary field. McSally eventually lost to now-Sen. Mark Kelly.

Woods grew up in metro Phoenix and graduated Phi Beta Kappa from Occidental College in 1976. He earned a law degree from Arizona State University in 1979.

In addition to his wife, he’s survived by five children.

Loved ones celebrate his life

Tributes, condolences continue to pour in for the late Grant Woods

Former Arizona Attorney General Grant Woods died over the weekend at the age of 67. He was a longtime fixture in Arizona and the tributes in honor of him continue. FOX 10's Linda Williams reports.

A celebration of life for Woods took place on Friday, Nov. 12 at 10 a.m., at the Orpheum Theatre in Downtown Phoenix.

The memorial service was originally supposed to take place at the All Saints Episcopal Church, however, the venue was changed to accommodate seating demands. The service went beyond the scheduled 90 minutes, due to all of the stories that were being shared about the former attorney general.

"It’s hard to know that someone of his charm and character has departed," said former Arizona Governor Jan Brewer.

"His closest friends -- if we were wrong, Senator McCain or myself, he let you know," said former Phoenix Mayor Phil Gordon.

The service was both somber and silly, filled with songs, stories, a few tears, and lots of laughs.

Loved ones said Woods was always fighting for what he thought was right: the fight over what was Republican.

"His last fight was the most dire: stopping voter suppression in the United States of America," said Woods' widow, Marlene Galan Woods.

In lieu of flowers, Woods' family requested that donations be made to the Boy's and Girl's Club of the Valley by visiting www.bgcaz.org/grant-woods/.

‘He had a good heart’

‘He had a good heart’: Former Arizona AG Grant Woods passes away

"He was a great lawyer, better than anybody else I know. He had a great sense, very eloquent to start with, but he also had a great sense of what it means to be in the public to be doing something for the people of Arizona," Terry Goddard said.

Goddard is a former mayor of Phoenix and former Arizona Attorney General.

Mike Riikola, a longtime friend and fellow attorney, said, "A skilled appellate advocate, who worked in nationally significant cases from tobacco to opioids to all mater of social engineering undertakings on behalf of human beings instead of corporations."

He also spoke at his longtime friend John McCain's funeral in 2018. 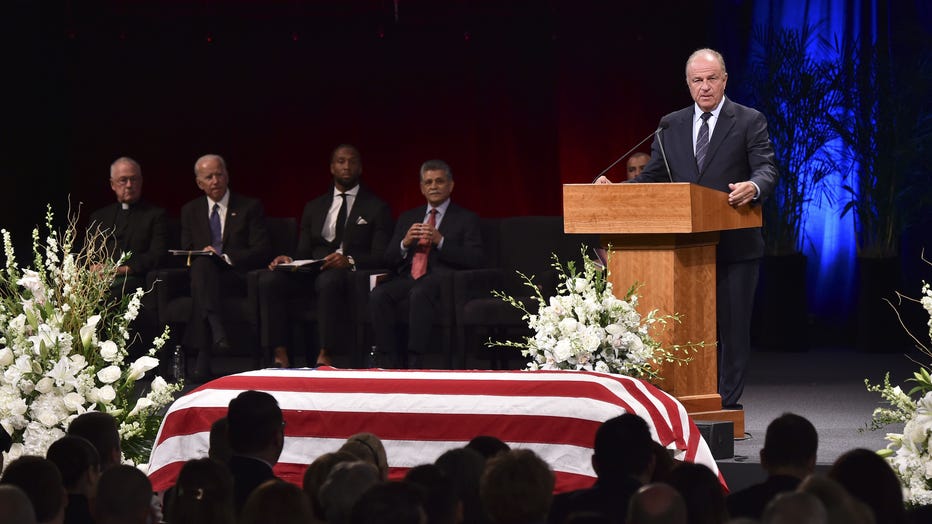 "He and John had a lot in common, they weren't a party through and through. They believed in a principal and if there was a diversion, what often happened in Grant's career, was that he went the other way and he was fearless about that," Goddard said.

Woods, friends say, was also a lover of music stories and sports. He had a way, they say, of bringing people together.

He had so many talents, impossible almost to just put him in a compressible ball. He was a songwriter, he was a playwright, he was a commentator," Goddard said, adding, "He had a good heart and he was the kind of lawyer that took on the hard cases, not because he's gonna make money, but because he thinks it's a cause worth doing."

"Rest in peace, my dear friend. You’ve had a good fight, and you finish the race. Please say hi to John and give him a hug for me. Thank you," said Sen. John McCain's widow, Cindy McCain. 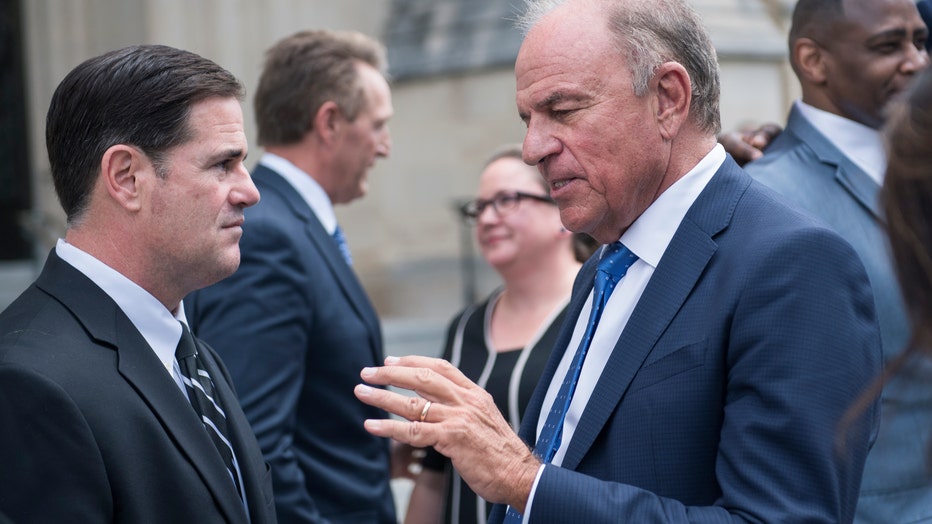 Arizona leaders react to the news of Woods' death

The memorial service for the late Grant Woods will be held at the Orpheum Theatre at 10 a.m. on Nov. 12. FOX 10's Danielle Miller reports.

Arizona's current Attorney General Mark Brnovich said in a statement, "Heartbreaking to learn of the passing of Grant Woods. I can’t imagine how difficult this time is for his entire family. Grant will never be forgotten. He was never one to back down or afraid to let you know what he was thinking. Even though we had many ‘spirited’ discussions throughout our friendship, I never doubted his love for Arizona. I know there’s a jam session going on right now with him, Charlie Watts, and John Prine."

Arizona Gov. Doug Ducey responded to the news, saying, "My deepest sympathies go out to the family and loved ones of Grant Woods. He was well-known in the Arizona community for decades, including serving as Attorney General and a chief of staff to John McCain before moving on to private practice. Arizona honors his life and years of public service. Our thoughts and prayers are with his wife Marlene and five children."

"It’s impossible to put into words how much he means to me and our community, and the profound impact he had. Grant was his own man, and I will miss him dearly. We send our support, love and prayers to his wonderful wife and family during this tragic time," Penzone said, in part.

Cindy McCain said, "Grant Woods was one of my best friends. My only comfort is knowing (he) is laughing and joking with John now and watching over all of us. We will miss you so much Grant. God Bless!"

Phoenix Mayor Kate Gallego expressed her condolences, saying in part, "Phoenix, and the entire state of Arizona, lost a great man today. Grant was an honorable, principled leader who kept his values at the forefront, and worked relentlessly on behalf of the people of Arizona. Our state is better because of him."

Arizona's Secretary of State, Katie Hobbs, said, "I’m heartbroken to hear about Grant Woods’ passing. This is a tragedy for all Arizonans. My thoughts are with his family."

House Democratic Leader Reginald Bolding released a statement, saying in part, "Grant Woods was an Arizona original who fought every day to better our state. He dedicated his life to public service and was a constant voice of reason when we needed it most. He was fiercely independent- always making the right choice over the easy one."

Not only are elected officials offering words of sympathy but so are sports teams.

The Arizona Coyotes released a statement, saying in part, "We are deeply saddened by the passing of former Arizona Attorney General Grant Woods. Grant was a tremendous person, a true public servant, a man of great honor, integrity and conviction."

Arizona is mourning the unexpected death of its former attorney general, Grant Woods. He was 67.