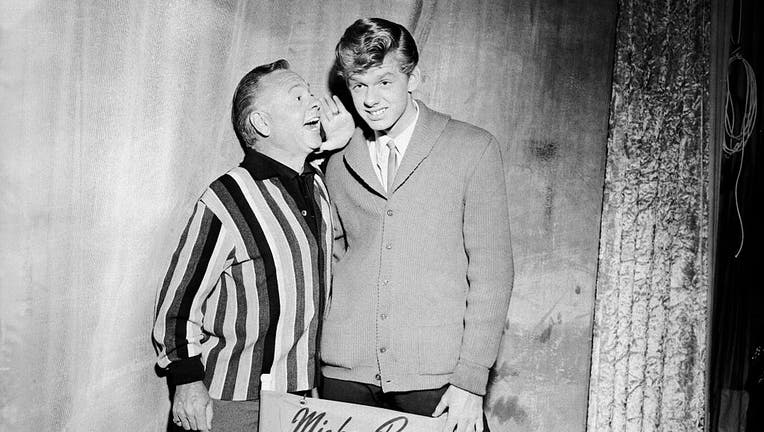 (Original Caption) Hollywood: Tall Story, Long And Short Of It. Mickey Rooney (Left) has to stand on tip of his toes to whisper advice to his eldest son, Mickey Jr., as the latter goes into dress rehearsal of Chip Off the Old Block. Other stars of th

Mickey Rooney Jr., the eldest son of Hollywood star Mickey Rooney who went on to become an original Mouseketeer, musician and actor, has died. He was 77.

Rooney Jr.’s death was announced by Paul Peterson, the former actor and founder of the advocacy group A Minor Consideration. The 76-year-old, who posted the news on Facebook, did not specify a cause of death.

"Mickey Rooney Jr. peacefully passed away this morning in Arizona," Peterson wrote on Saturday. "For the past many years, he lived with and was in the care of Chrissie Brown and her family. I first met Mickey, the oldest of nine siblings sired by his famous father when he and Timmy were hired by Disney to be Mouseketeers in 1955. Mickey Junior was tall and talented. He could sing, dance and act… and get in trouble. We three were fired for Conduct Unbecoming a Mouse!"

"Mickey Junior was the personification of ‘damaged goods,’" Peterson continued. "He gave all he could. I was born on the same day as Mickey’s father and ‘The Mic’ gave me, unsolicited mind you, the most useful advice I ever got. It is one of my greatest sorrows that he didn’t do the same for his son. Mickey Rooney Junior. Rest In Peace at last. We will see to your wishes."

MICKEY ROONEY’S DAUGHTER RECALLS CLOSE BOND WITH STAR AFTER HER MOTHER’S TRAGIC PASSING: ‘WE CHERISHED HIM’

Rooney Jr.’s longtime companion, Chrissie Brown, also told The Hollywood Reporter that he died on Saturday at his Glendale, Arizona, home. She told the outlet that the cause of death is unknown.

Rooney Jr. was born Joseph Yule III (his father’s birth name was Joe Yule Jr.) in Birmingham, Alabama. His mother, Betty Jane Baker, was a singer and winner of the 1944 Miss Alabama beauty pageant. According to The Hollywood Reporter, she first met Rooney when he was stationed in the U.S. Army in Birmingham during World War II. She became the second of his eight wives. The couple was married from 1944 until 1948.

Rooney Jr. and his brother Tim Rooney were hired as backup cast members on ABC’s "The Mickey Mouse Club" in 1955. According to The Hollywood Reporter, Rooney Jr. worked on a handful of episodes before they were fired over some mischief in the Disney paint department. Peterson, also an original Mouseketeer, was also canned that first season.

In 2001, the star told Riverside Press-Enterprise newspaper that his grandmother Nanny Rase, an avid ukulele plate, asked him at age 11 if he wanted to learn how to play some chords. He went on to play guitar, keyboard, bass, drums and harmonica.

Pursuing his love for music, Rooney Jr. recorded songs in the ‘60s, including "The Wandering Wind," "The Choice Is Yours," and "It Certainly Ain’t a Nice Thing," which appeared on the ABC music show "Shindig!" He played with brothers Tim and Teddy, as well as with Willie Nelson. He appeared with actor/musician Jerry Schatzberg in 1980’s "Honeysuckle Rose" and Alan Rudolph’s "Songwriter" in 1984. Rooney Jr. had a small role in 1967’s "Hot Rods to Hell" and helped score the soundtrack. He later appeared in the 1975 TV movie "Beyond the Bermuda Triangle."

In 1972, Rooney Jr. married Merci Montello, a Playboy playmate, the outlet shared. The pair parted ways and he remarried to Laura Hollander. That union lasted from 1986 until she died in 2006. Rooney Jr., who struggled with substance abuse, became a born-again Christian and founded an evangelical ministry.

Rooney Jr. is survived by his companion Brown. Complete survivors were not immediately available.

"He was a wonderful man," she told The Hollywood Reporter. "The last 18 years with me and my family, he’s been an angel."