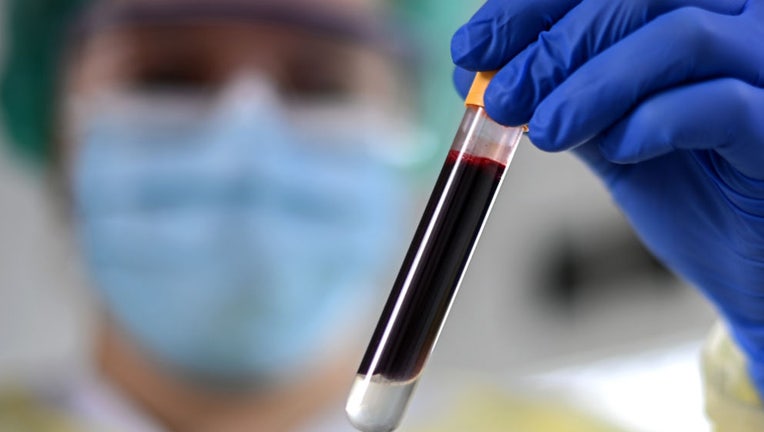 FILE - A study assistant, is holding a blood sample in her hand. (Britta Pedersen/picture alliance via Getty Image)

Researchers have documented evidence of microplastics found in human blood for the first time, according to a recent study conducted in the Netherlands.

The study, published in the journal Environment International on March 24, observed the blood of 22 healthy, non-fasting volunteers and subsequently, 17 out of the 22 people tested positive for having microplastics in their blood.

Researchers found four "high production volume polymers" in test subjects’ blood which included polyethylene terephthalate, a synthetic resin which is often found in clothing fibers, containers for liquids and food and found in food in general, according to the study.

In addition, polyethylene, one of the most common types of plastics primarily used in packaging for food, medical tubing and cable wires was also detected in the subject’s blood.

Also present was polymers of styrene, otherwise known as polystyrene, which is made "from the monomer styrene, a liquid hydrocarbon that is commercially manufactured from petroleum," according to Science Direct.

Polystyrene is widely used in the food industry to create containers, cups, utensils, plates and bowls.

Researchers found approximately 1.6 micrograms (one-millionth of a gram) of microplastics in blood samples. While this doesn’t sound like much, researchers said this new evidence should sound the alarm for most people.

These findings show just how easily microplastics can make their way into the human body apart from ingesting it or breathing it in.

Researchers also noted they only searched for a few specific polymers, indicating there could be more types of microplastics flowing through our veins.

"An understanding of the exposure of these substances in humans and the associated hazard of such exposure is needed to determine whether or not plastic particle exposure is a public health risk," study authors wrote.

More research is needed to determine whether or not there are health risks associated with ingesting microplastics, especially now since it seems nearly impossible to avoid getting it into our bodies.

How much microplastics do humans ingest?

Americans eat, drink and breathe in an estimated 74,000 and 121,000 microplastics each year, depending on their age and gender, according to a study published in Environmental Science & Technology in June 2019.

Those who only drink bottled water over tap water can ingest an additional 90,000 plastic particles each year, the study found.

"Individuals who meet their recommended water intake through only bottled sources may be ingesting an additional 90,000 microplastics annually, compared to 4,000 microplastics for those who consume only tap water," the study stated.

Infants ingest 15 times more microplastics than adults, according to a study published in the American Chemical Society in September 2021.

Microplastics are pieces of plastic that measure less than 5 millimeters, according to the study.

Researchers collected data from six infants and 10 adults and found that the infants had much more microplastics in their feces as opposed to the adults.

Much of the reason for the vast difference in data might be because infants are exposed far more to microplastics than adults, according to the study authors.

Researchers attributed the use of plastic toys such as teethers, bottles, sippy cups and other plastic utensils as a few of the likely culprits exposing children to larger amounts of microplastics.

In December 2020, researchers have discovered microplastics in human placentas for the first time, shedding new light on the level of human exposure to such materials and giving rise to concern about its potential to interfere with fetal development.

The study, published in the journal Environment International, found particles in the placentas of four healthy women who had normal pregnancies and births in Italy. The microplastics were detected on both the fetal and maternal sides of the placenta, as well as in the membranes that surround and protect the fetus.

"Due to the crucial role of placenta in supporting the fetus development and in acting as an interface between the latter and the external environment, the presence of exogenous and potentially harmful (plastic) particles is a matter of great concern," the researchers wrote.

In total, researchers found 12 microplastic fragments with spherical or irregular shape. Most were 10 microns in size, meaning they were small enough to be transported in the bloodstream.

All of the microplastics had been dyed blue, orange, red, pink or violet and may have originally come from packaging, paints or cosmetics and personal care products, the study said.

Only small portions (roughly 4%) of the placentas were analyzed, suggesting that the total number of microplastics could be much higher.

Kelly Hayes contributed to this report.