The video was shared with FOX 35 by WPTV.

PALM BEACH, Fla. - Moving trucks were spotted Monday outside of President Trump's Mar-a-Lago resort in South Florida as he is expected to move in on the day of President-elect Joe Biden's inauguration.

A person familiar with President Donald Trump's planning said that he will leave Washington D.C. on the morning of President-elect Joe Biden’s inauguration.

President Trump previously said that he would not be attending Biden’s inauguration, breaking tradition. He is expected to go to Florida and live at his resort, Mar-a-Lago.

RELATED: Trump may issue as many as 100 commutations, pardons before term ends

The Palm Beach Police Department posted a letter stating that they expect the Secret Service to close roads on Wednesday, the day of the inaguration, due to the presence of a former President.

He will be sent off with a departure ceremony at Joint Base Andrews, according to a person familiar with the planning who spoke to the Associated Press on condition of anonymity because Trump's plans have not been formally announced. Officials are considering an elaborate event that would have the feel of a state visit, with a red carpet, color guard, military band and 21-gun salute all being discussed.

WPTV, a station in South Florida, flew over Mar-a-Lago on Monday morning and spotted at least two trucks from JK Moving Services stationed at the club, with workers carting large moving boxes into the property.

MORE NEWS: What time is the inauguration? Answers to your questions about Inauguration Day 2021

They also said that heavy security was also apparent with a United States of America helicopter and Palm Beach County Sheriff's Office helicopter over the resort. 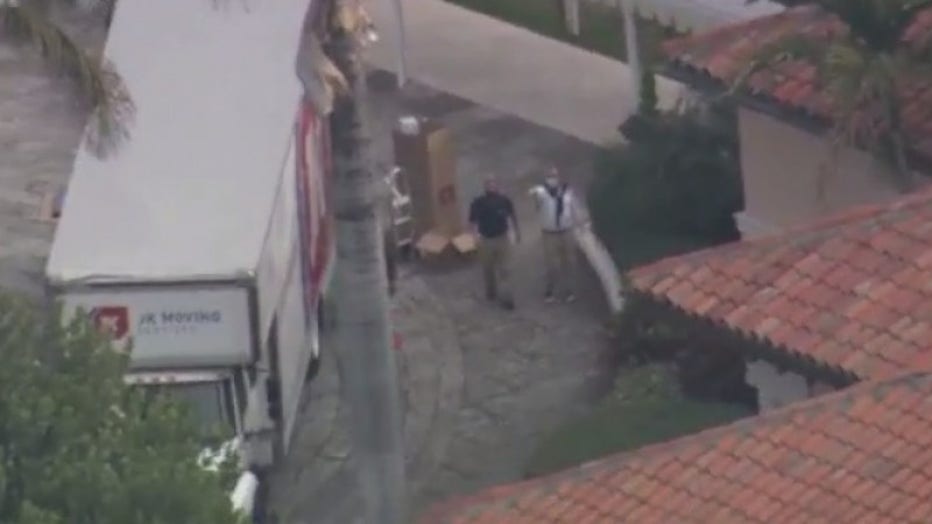 Some of President Trump's Palm Beach neighbors are trying to keep him from moving in. For example, one neighbor's attorney, Reginald Stambaugh, sent a letter to the Town of Palm Beach, arguing that Trump moving to Mar-a-Lago would decrease the area's property values.

The President and First Lady Melania Trump changed their legal residence from New York City to Palm Beach last year. Stambaugh says that violates the 1993 agreement between Trump and the town that allowed him to turn Mar-a-Lago from a private home into a club that has 10 guest rooms for rent.

The agreement says only members can stay overnight and for no more than 21 days per year, divided into three one-week stays that cannot run consecutively. The question is whether Trump is a club member and covered by those rules.