The Coconino, Kaibab, Apache-Sitgreaves, Tonto, and Prescott National Forests have all reopened after closing due to high wildfire activity.

PHOENIX - The Coconino, Kaibab, Apache-Sitgreaves, Tonto, and Prescott National Forests closed due to extreme fire dangers, dry conditions and the risk of high wildfire activity, but as fires eased, the forests have been reopened.

However, Bill Williams Mountain near Williams remained closed to the public and fire restrictions remained in effect across the forest because the persistent drought in the region meant that fire danger remains high, officials said in a statement.

The Kaibab National Forest includes sections near Williams and north of the Grand Canyon.

The Coconino National Forest includes the San Francisco Peaks overlooking Flagstaff plus areas south and southeast of the city.

Apache-Sitgreaves near Springerville and the 2.8 million acre Tonto National Forest which stretches from Phoenix to northern Arizona will reopen on July 7 with stage 2 restrictions as well.

Officials say a large portion of the Apache-Sitgreaves has recently received cooler temperatures and enough rain that has reduced the risk of severe fire behavior.

The forest closed June 24 to reduce the risk to public safety due to extreme fire danger and historically dry conditions.

Tonto officials said the forest received nearly 2 inches of rain across a majority of the acreage last week.

The Prescott National Forest closed to the public on June 25 at 8 a.m. Officials announced on Wednesday it has been reopened, however, stage 2 fire restrictions remain in place. A fire area closure is also in place for the Rafael and Tiger Fires.

Due to increased fire danger amid several wildfires burning across Arizona, the Coconino National Forest is temporarily shutting down. Arizona Snowbowl, which is in the Coconino National Forest, announced it will suspend its summer operations on June 23. Arizona Snowbowl Marketing Manager Li Cui joins FOX 10 AZAM to speak on the temporary closure.

Anyone camping in the forests was expected to vacate their campsites before the closures began, and the public was advised to cancel any plans to visit the forests.

Officials said anyone who tried to violate closure orders could face a fine of up to $5,000 for individuals and $10,000 for organizations. People could also face up to six months in prison. 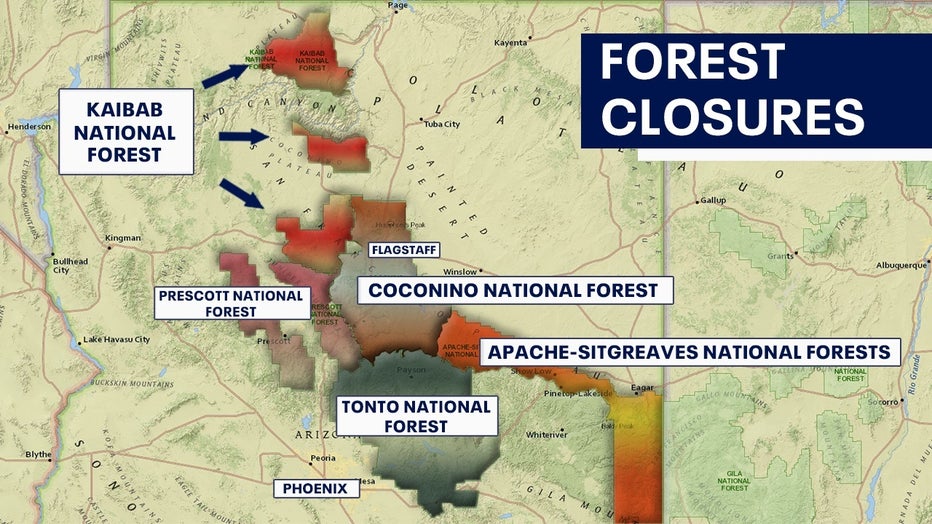