FLAGSTAFF, Ariz. - The Interior Department announced Friday that it will consider revising a set of guidelines for operating two major dams on the Colorado River in the first sign of what could lead to federal action to protect the once-massive but shrinking reservoirs behind them.

The public has until Dec. 20 to weigh in on three options that seek to keep Lake Mead and Lake Powell from dropping so low they couldn’t produce power or provide the water that seven Western states, Mexico and tribes have relied on for decades.

One of the options would allow the Interior Department’s U.S. Bureau of Reclamation to take unilateral action, as it threatened this summer when it asked states to come up with ways to significantly reduce their use beyond what they’ve already volunteered and were mandated to cut.

"The Interior Department continues to pursue a collaborative and consensus-based approach to addressing the drought crisis afflicting the West," Interior Secretary Deb Haaland said in a statement. "At the same time, we are committed to taking prompt and decisive action necessary to protect the Colorado River System and all those who depend on it."

The agency’s announcement comes more than four months after Reclamation Commissioner Camille Touton first told Congress that water use must be cut back dramatically as drought and overuse tax the river — an essential supply of water for farmers, cities and tribes in the U.S. West, as well as Mexico.

MORE: Drought in Western US heats up as a Senate campaign issue

The seven states that tap the river failed to reach Touton’s initial August deadline and have been working ever since to reach a compromise. It now appears unlikely a grand deal will be reached. In the meantime, the bureau has offered up billions in federal money to pay farmers and cities to cut back.

But Interior’s new action marks the first time it’s taking a clear step toward imposing its own, mandatory cuts. The agency anticipates changes to the conditions at which water shortages are declared in the river’s lower basin. Lake Mead and Lake Powell were about half full when the 2007 guidelines were approved and are now about one-quarter full. 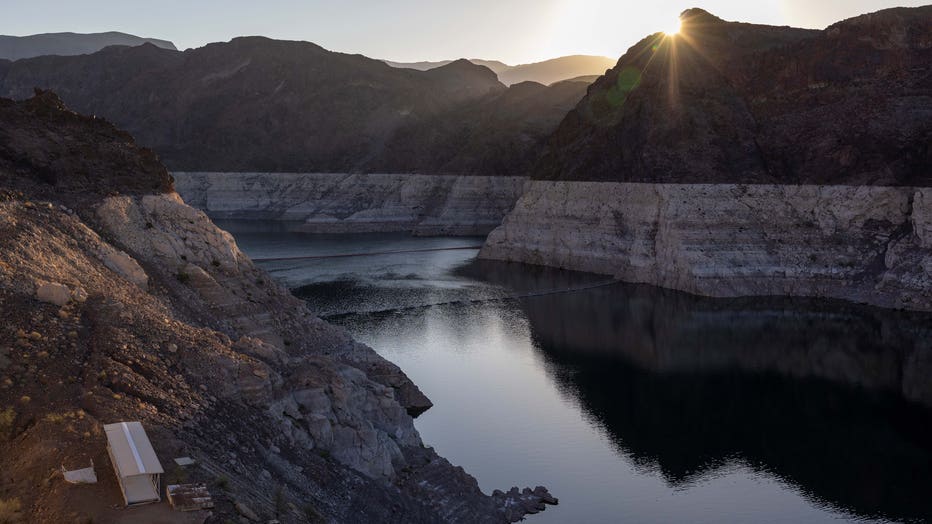 The other two options under the Bureau of Reclamation’s plan are to let states, tribes, and non-governmental organizations reach consensus, or do nothing, which is a standard alternative in environmental impact statements.

The Bureau of Reclamation expects to produce a draft next spring based on public input. A final decision could come in late summer of 2023 around the time the bureau announces any water cuts for the following year.

The 2007 guidelines and an overlapping drought contingency plan approved in 2019 were meant to give states more certainty in their water supply. For the lower basin states — California, Arizona and Nevada — the agreements set elevation levels at Lake Mead on the Arizona-Nevada border at which they are subjected to mandatory and voluntary reductions. Mexico also shoulders cuts.

Water users have been delayed in renegotiating the agreements that expire in 2026 because the drought and climate change have forced quicker action.

Nevada, Arizona and Mexico will have to cut their water use in 2023 for a second year in a row under existing agreements. California is looped in at lower elevations in Lake Mead. Arizona was forced to give up 21% of its total Colorado River supply. Farmers in central Arizona, tribes and growing cities like Scottsdale are feeling the impacts.

Tom Buschatzke, director of the Arizona Department of Water Resources, said he’s been hoping the bureau would require cuts from water users rather than rely on voluntary action. But he also warned the prospect of mandatory cuts could make it less likely that farms or cities will choose to give up some of their water, calling it a "zero-sum game" of sorts.

Still, anything that results in savings is a worthwhile action, he said.

"The situation in my mind is so dire, we’re so close to the edge," he said in a recent interview.

The Bureau of Reclamation also said it would publish a report next year to address ways to account for evaporation, seepage and other loss as water makes its way to states, cities and tribes.

In mid-October, the bureau announced a process for paying farmers and cities in Arizona, California and Nevada to conserve Colorado River water. Under one option, they can be paid up to $400 per acre-foot of water (325,850 gallons) left in Lake Mead. So far only the Gila River Indian Community in Arizona has publicly expressed interest in that option, saying it will conserve up to 125,000 acre-feet of water (40.7 billion gallons) on its reservation and offer another 125,000 acre-feet of water stored underground to cities annually for the next three years.

But farmers in California and Arizona say that’s not enough money to account to cover losses if they leave fields unplanted or to pay for things like installing more efficient irrigation systems. Instead, they plan to apply for money through a different option that allows them to name their price — and justify why they deserve it.

The Imperial Irrigation District, which supplies water to farms in southeast California, has said it can conserve up to 250,000 acre-feet of water (81.5 billion gallons). But officials haven’t said the price tag they plan to put on those savings. Farmers in Arizona’s Yuma County also want more money.

A third pot of money would offer payment for larger projects aimed at achieving long-term water savings, like ripping up decorative grass in urban areas or building small, on-farm storage systems that make it easier for farmers to bank water rather than lose it to runoff.

The bureau says water users who take the $400 payments may be prioritized for that money over users who want more for short-term conservation.

California farmers’ commitment is part of a broad offer by the state’s water users to conserve up to 9% of its river water. That’s contingent on adequate payment and help for the Salton Sea, a drying lake bed fed by farm runoff.

Farmers and agriculture will bear the biggest impact from the historic Colorado River water cuts that were announced, but how might it affect other Arizonans, going forward? FOX 10's Steve Nielsen has more.

Lake Mead is currently less than a quarter full and the seven states overall that depend on its water missed a federal deadline to announce proposals on plans cut additional water next year.

For the second year in a row, Arizona and Nevada will face cuts in the amount of water they can draw from the Colorado River as the West endures an extreme drought, federal officials announced. FOX 10's Nicole Garcia reports.