After missing its initial opening date of Nov. 18 due to a lack of snow, officials with Arizona Snowbowl opened up a portion of the ski area to skiiers and snowboarders on Nov. 24. FOX 10's Matt Galka reports.

FLAGSTAFF, Ariz. - Arizona Snowbowl, or at least parts of it, are now open for a new ski season, after officials with the ski area delayed their initial opening day due to not having any snow.

"Our snowmakers have been working tirelessly to produce the best quality snow for another great opening day and will continue to strive to get more terrain open throughout the week as weather permits. Please note only expert terrain is available at this time and no beginner terrain will be available until further notice," read a portion of the statement released on Nov. 22.

As parts of the ski area opened, Koby Atlas, Dylan Conklin, and their group of friends were all thankful there is finally some snow on the ground.

On Nov. 24, only four runs were open, thanks to some natural accumulation overnight and some of the manmade stuff being churned out by the snowmaking machines.

"Water and air shooting in, then letting Mother Nature do the rest," said Resort Services Director Ryan Hartl. "It's water and air mixture going into the atmosphere and freezing, coming down as snow."

Despite the ski area opening only its expert trails, a good crowd still lined up for opening day.

The popular ski and snowboarding spot in Northern Arizona was planning to open some of its initial runs for the season on Nov. 18.

As a temperature phenomenon known as La Niña keeps storms further north, this winter is predicted to be warmer and drier.

"We’re in a weak La Niña tight now, expected to go to moderate, and the forecast is for warmer-than-normal and below-normal precipitation," said Darren McCollum, Lead Meteorologist with the National Weather Service office in Flagstaff. "Now, we still get snowstorms, even in La Niña years, and we’ve gotten some pretty major snowstorms."

NWS officials say they see a slight chance of snow in the Flagstaff area around Thanksgiving Day, for now. 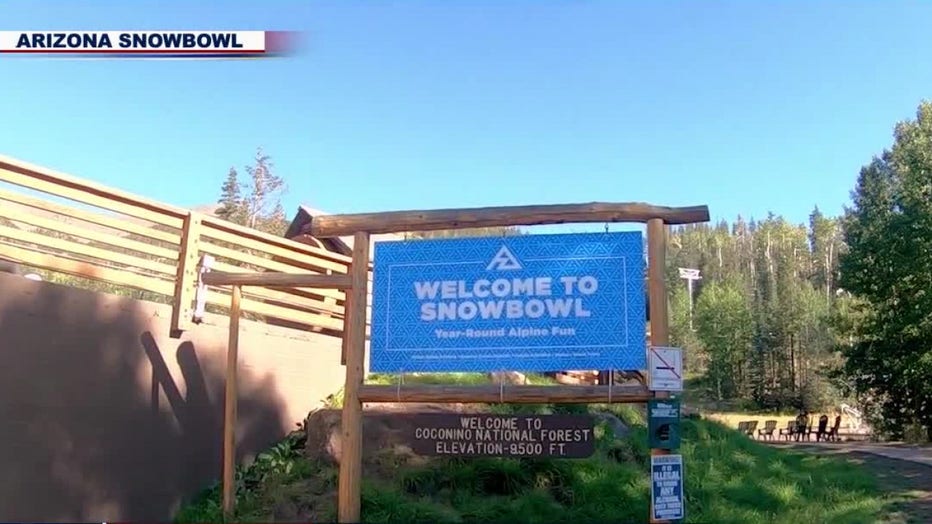 The Arizona Department of Transportation is reminding drivers who are heading north to never park along highways to play in the snow.

Use the highway shoulders for emergencies only. Parking on them to play in the snow is hazardous in the following ways:

"Also, it’s not uncommon for lots of desert dwellers to take the opportunity to head north to play in the snow. So, remember to pack your patience and expect to spend extended time in your vehicle getting to and from snow play areas."

ADOT's suggestions for items to take along:

ADOT says you and your vehicle must be prepared for driving in wintry conditions, including snow, ice and freezing temperatures.

Get more safety tips at https://azdot.gov/KnowSnow