Pelosi calls for Pence to remove Trump with 25th Amendment

House Speaker Nancy Pelosi has joined Senate Democratic leader Chuck Schumer and a growing chorus of lawmakers calling on President Donald Trump’s Cabinet to remove him from office following Wednesday’s violent assault on the Capitol by the president’s supporters.

WASHINGTON - House Speaker Nancy Pelosi has joined Senate Democratic leader Chuck Schumer and a growing chorus of lawmakers calling on President Donald Trump’s Cabinet to remove him from office following Wednesday’s violent assault on the Capitol by the president’s supporters.

"In calling for this seditious act, the president has committed an unspeakable assault on our nation and our people. I join the Senate Democratic leader in calling on the vice president to remove this president by immediately evoking the 25th Amendment," Pelosi said.

"If the vice president and the cabinet do not act, the Congress may be prepared to move forward with impeachment. That is the overwhelming sentiment of my caucus — and the American people, by the way."

In a statement Thursday, Schumer said the attack on the Capitol "was an insurrection against the United States, incited by the president." He added that Trump "should not hold office one day longer."

Schumer said Vice President Mike Pence and the Cabinet should invoke the 25th Amendment and immediately remove Trump from office. He added, "If the vice president and the Cabinet refuse to stand up, Congress should reconvene to impeach the president." 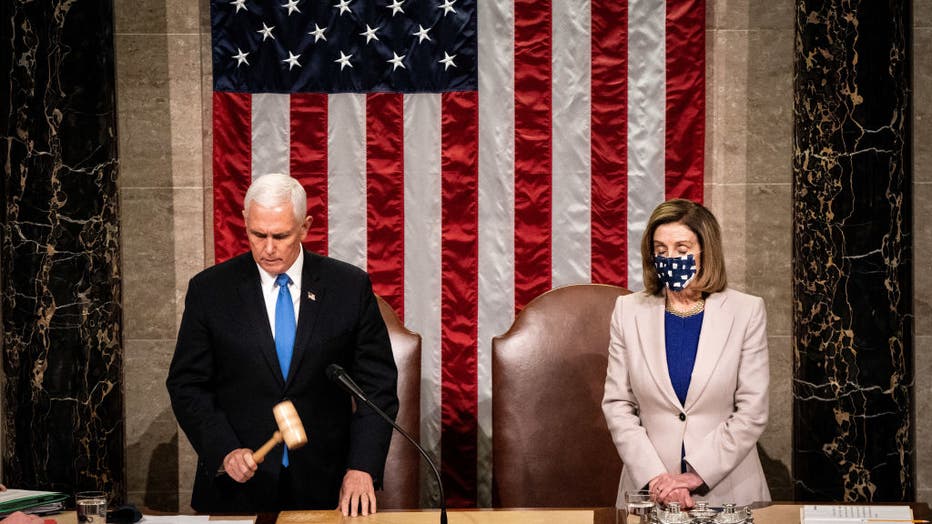 Vice President Mike Pence and Speaker of the House Nancy Pelosi (D-CA) preside over a joint session of Congress on January 6, 2021 in Washington, DC. (Photo by Erin Schaff - Pool/Getty Images)

Under the 25th Amendment, Congress, the cabinet and vice president can strip powers from a president if for some reason he or she is declared unfit under dire circumstances. But that requires a two-thirds vote of both chambers.

This scenario would temporarily transfer power to Pence until President-elect Joe Biden is sworn into office on Jan. 20.

Lawmakers on both sides of the aisle criticized Trump for fanning the flames that led to the riot inside the Capitol by repeating false claims of widespread voter fraud and relentlessly questioning the integrity of the 2020 election.

Some called for the president to be impeached for a second time, and others calling for use of the 25th Amendment.

RELATED: What is the 25th Amendment? Here’s what you need to know

Earlier Thursday, Rep. Adam Kinzinger, R-Ill., said it was with a "heavy heart" that he was calling for the 25th Amendment of the Constitution to be invoked to remove Trump from office. "The president is unfit. And the president is unwell," Kinzinger said in a video posted on Twitter.

The letter cited the president’s role in encouraging the pro-Trump riot that transpired. The signatories of the letter called into question the president’s mental state and his inability to accept the results of the 2020 election.

Joe Biden speaks on violent protests at US Capitol

President-elect Joe Biden spoke as protesters tore down metal barricades at the bottom of the Capitol’s steps and were met by officers in riot gear.

Rioters took over the presiding officer’s chair in the Senate, the offices of the House speaker and the Senate dais, where one yelled, "Trump won that election."

They mocked its leaders, posing for photos in the office of House Speaker Nancy Pelosi, one with his feet propped on her desk, another sitting in the same seat Pence had occupied only moments before during the proceedings to certify the Electoral College vote (https://apnews.com/hub/electoral-college).

Trump supporters clashed with police and attacked the Capitol building in Washington DC on January 6, as lawmakers gathered to count electoral votes to affirm the presidential victory of Joe Biden.

The rioters were egged on by Trump, who has spent weeks falsely attacking the integrity of the election and had urged his supporters to descend on Washington to protest Congress’ formal approval of Biden’s victory. Some Republican lawmakers were in the midst of raising objections to the results on his behalf when the proceedings were abruptly halted by the mob.

Congress reconvened late Wednesday, with lawmakers decrying the protests that defaced the Capitol and vowing to finish confirming the Electoral College vote for Biden’s election, even if it took all night.

Pence reopened the Senate and directly addressed the demonstrators: "You did not win."

Republican Senate Majority Leader Mitch McConnell said the "failed insurrection" underscored lawmakers’ duty to finish the count. Democratic House Speaker Nancy Pelosi said Congress would show the world "what America is made of" with the outcome.

The president gave his supporters a boost into action Wednesday morning at a rally outside the White House, where he urged them to march to the Capitol. He spent much of the afternoon in his private dining room off the Oval Office watching scenes of the violence on television.

At the urging of his staff, he reluctantly issued a pair of tweets and a taped video telling his supporters it was time to "go home in peace" — yet he still said he backed their cause.

On Wednesday, Twitter for the first time locked Trump’s account, demanded that he remove tweets excusing violence and threatened "permanent suspension." Facebook and Instagram said Thursday they will bar Trump from posting at least until the inauguration of Biden.