LOS ANGELES - It took only five minutes for one South Korean restaurant patron to become infected with the novel coronavirus from another person at the restaurant sitting more than 20 feet away, researchers say.

Through South Korean officials’ meticulous contact tracing efforts, epidemiologists found evidence to suggest that the widely accepted social distancing rule of 6 feet of distance might not be enough to keep others safe from contracting the deadly coronavirus.

The study, published in the Journal of Korean Medical Science, suggests that transmission of respiratory droplets, which are known to be the most common way COVID-19 spreads, was observed at a distance greater than 2 meters [6.6 feet].

"The guidelines on quarantine and epidemiological investigation must be updated to reflect these factors for control and prevention of COVID-19," the study authors wrote.

KJ Seung, an infectious disease expert and chief of strategy and policy for the nonprofit Partners in Health’s Massachusetts COVID response, recently told the Los Angeles Times that a common misconception amid the ongoing pandemic is "if I’m not a close contact, I will magically be protected."

But the South Korean study’s authors pointed out that the coronavirus is airborne, and infectious particles had the potential to linger in the air for hours.

"An experimental study showed that the COVID-19 virus in aerosol particles remained viable during 3 hours and 16 hours," study authors wrote.

The authors explained that they identified a person in Jeonju, Korea who had tested positive for COVID-19 on June 17. Researchers were left perplexed due to the fact that there hadn’t been a positive case of the virus in two months in that province and the person had largely avoided travel overall.

South Korean contact tracers later found through cellphone GPS data that the person had come into contact, though briefly and at a distance, with a coronavirus patient from a different province at a first-floor restaurant on June 12.

Epidemiologists said the overlap between both individuals lasted roughly five minutes. Researchers said the two sat at a distance of over 6.5 meters [21 feet]. "Cases A and B engaged in conversation with their respective companions without masks," researchers wrote. 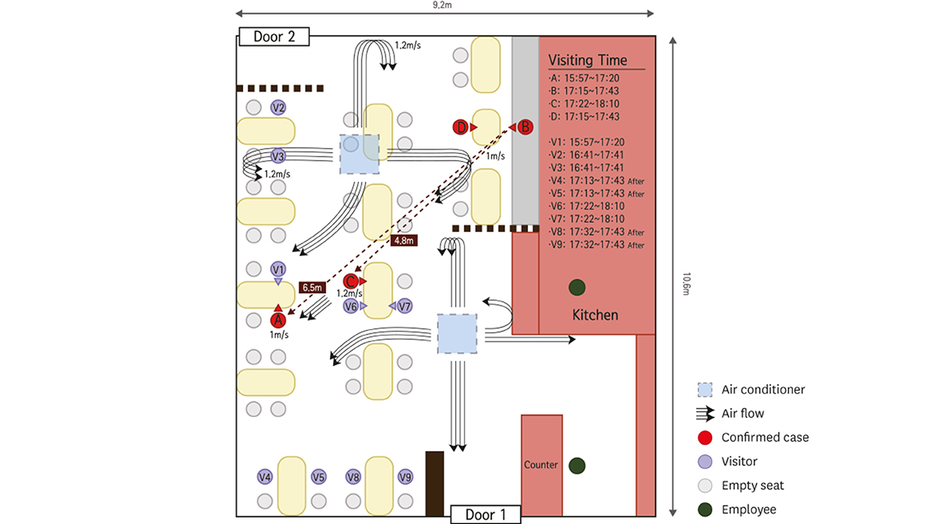 The study echoes similar findings from epidemiologists showing how easily COVID-19 can spread in closed spaces.

The video features a simulation of two scenarios, including one involving four people sitting at a desk facing each other, and another depicting a crowded train.

In one of the video simulations, an individual coughs inside a typical office environment, triggering virus particles to spread around them. Despite a partition creating a physical barrier between each person and their desk, the computer simulation appears to show air droplet particles spreading and covering all four individuals who are seated in the desk cluster.

In a separate simulation, a packed train traveling at 49 mph with windows open attempted to show that when the train was filled during rush hour, passengers could not expect proper ventilation in the event that one person coughed or sneezed, according to NHK.

A separate study that came out of Guangzhou, China observed COVID-19 infections spread between three separate families who dined at a restaurant at tables that were 3 feet apart.

According to the study, 10 diners from all three families eventually tested positive for the coronavirus. The outbreak occurred from Jan. 26 through Feb. 10.

The advice about staying at least 6 feet apart is based on the idea that the larger particles drop to the ground before getting very far. But some scientists have also focused on tinier particles called aerosols, which can linger in the air for minutes to hours and spread through a room.

The aerosolized particles can also build up in concentration if ventilation is poor, posing a potential risk of infection if inhaled.

For aerosols, "6 feet is not a magic distance" and keeping even farther apart is better, said Dr. Linsey Marr, who researches airborne transmission of infectious diseases at Virginia Tech.

Some scientists say there’s enough evidence on aerosols and the virus to take protective measures. In addition to the usual advice, they stress the need for ventilation and air-purifying systems when indoors. Even better, they say, is to stay outdoors at a safe distance when interacting with others.

Editor’s Note: A previous version of this article erroneously indicated that the study out of Guangzhou, China, involving 10 diners from three families who tested positive for COVID-19, was published by the U.S. Centers for Disease Control and Prevention. The story has been updated the reflect that the study was not published by the CDC, and instead was published in the medical peer-reviewed journal, "Emerging Infectious Diseases." While the CDC commonly shares studies from this journal, the agency says that opinions, and conclusions expressed by the study authors do not necessarily reflected the official position of the CDC on the matter.