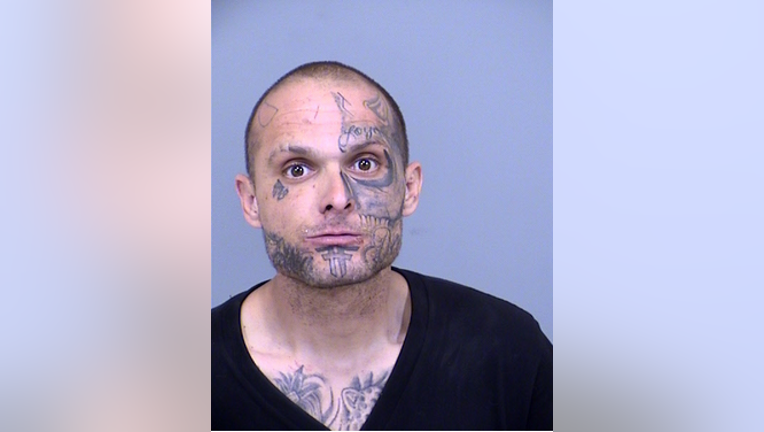 PHOENIX - A Phoenix man is accused of armed robbery with a deadly weapon after a witnesses stated he had a gun and would shoot them as he left a Home Depot store, according to Phoenix Police.

As the suspects walked around the store selecting numerous items, an employee asked them if they needed assistance. They said no.

According to the police report, the "victim then observed both at separate times exit the store and then come back in. He observed the suspect in the red shirt holding a credit card and then overheard the suspect with the face tattoos say something to the effect, 'not to worry about it he had a gun and would shoot them.'"

That's when investigators say the victim called the police. During the phone conversation, the victim said he saw the first suspect leave the store and the second suspect was standing at the self-checkout line with a shopping cart full of items.

The "victim then observed him take off his black and red backpack and start to go through it and take out a black semiautomatic handgun.. said that the slide of the gun was back, and he could see the magazine and a bullet on top of the magazine," stated investigators.

The victim stated the suspect with facial tattoos then placed the gun in his waistband and began to walk out of the store while telling an employee at the exit that he had a gun and would shoot them.

Police say after viewing surveillance video footage and talking to witnesses, the suspect with the gun accused of leaving the Home Depot with the merchandise was later identified as 32-year-old Michael Ruiz.

On Feb. 21, Ruiz was taken into custody in the area of 29th Street and Bell Road.

Detectives say Ruiz denied saying he would shoot anyone and stated that he did not point the gun at anyone. Ruiz admitted that there was another person in the store with him, but would not provide his name or information.