PHOENIX - Protestors took to the Arizona capitol this weekend arguing against what many are calling anti-LGBTQ bills that were just proposed in the state legislature.

The protest was organized by many in the LGBTQ community in opposition to those bills, but they decided to host this protest on the 50th anniversary of the 1973 Roe v. Wade Supreme Court decision and called Sunday's protest "Bigger Than Roe" to highlight the connection between abortion rights and LGBTQ rights in the fight for bodily autonomy.

"An attack against one of us is an attack against all of us. If our rights are something that can be easily stripped away for one group, it can easily happen for another group. So it's really important that we show up for one another," says Xyra Flores with Trans Queer Pueblo.

The protest was against a handful of bills just proposed in the Arizona legislature that are said to be an attack on transgender people – in more ways than one.

"We see that these bills are another attempt to erase our people from existing in public really," Flores said.

Some of the proposed bills they take issue with seek to put limits on where drag shows can be performed with certain zoning requirements and limited hours to avoid children from seeing them. Another argues no taxpayer dollars should be used to fund drag shows aimed at children. 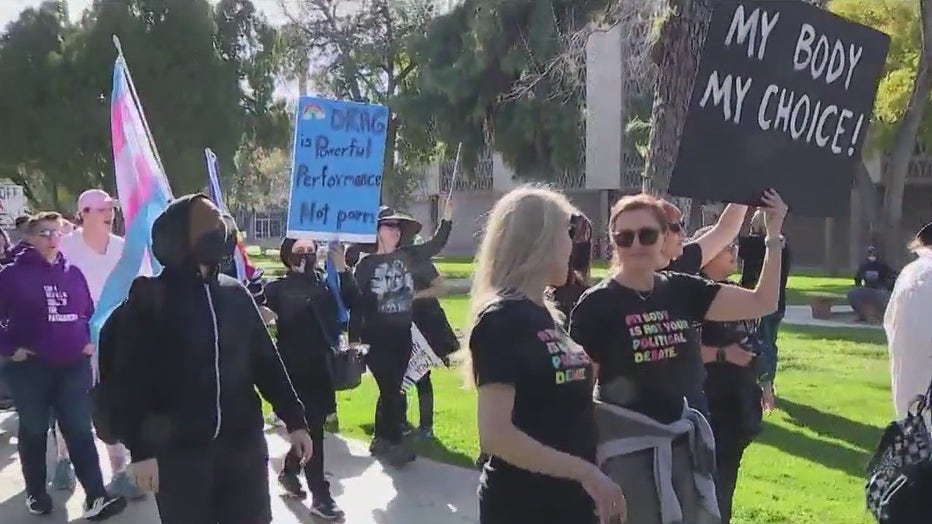 Another bill would not allow students in school to be called by a gender pronoun that does not align with the one they were assigned at birth.

"The last bill has to do with K-12 showers, locker rooms and bathrooms. It simply says that they have to be single-gender by biological sex, except if they're single-use, then there's no issue," Kavanagh said.

Those against these bills say they don't target the most pressing problems facing Arizonans and instead look to target and silence a small group of people.

"When we have a growing unsheltered crisis here in the state of Arizona, unaffordable housing, combating inflation, there's just so much that is happening right now that is of so much importance," Brianna Westbrook with the Arizona Democratic Party.

Phoenix drag queen defends performance: 'Drag is such a huge part of the entertainment culture'

Richard Stevens performs as a drag queen in the Valley, better known by the stage name Barbra Seville. These three proposed bills would have a direct impact on her performances and a minor's access to them if they wanted to see a show.