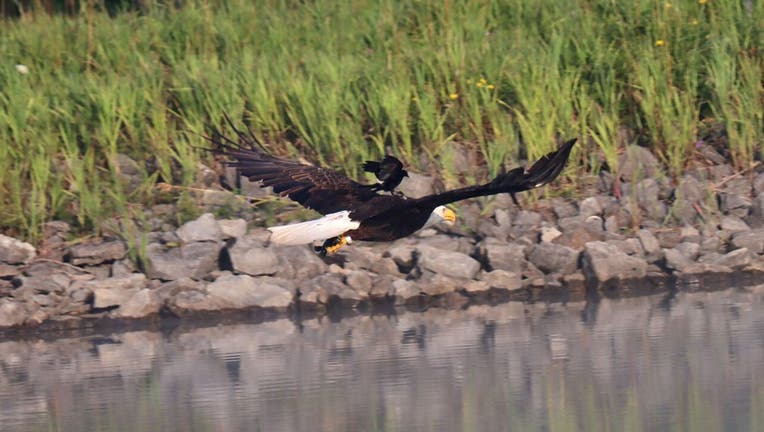 New York wildlife officials shared a rare photograph Monday of a red-winged blackbird hitching a ride on the back of a hunting bald eagle. (Courtesy: Bill Combs Jr.)

COBLESKILL, N.Y. - New York wildlife officials shared a rare photograph Monday of a red-winged blackbird hitching a ride on the back of a hunting bald eagle.

Bill Combs Jr., a local wildlife photographer, recorded the incident at the Cobleskill Reservoir, about 45 miles west of Albany, according to the New York State Department of Environmental Conservation (NYSDEC), which shared the image on Facebook.

It shows a low-flying eagle, with a fish caught in its talons and its wings spread with the blackbird perched on its back. 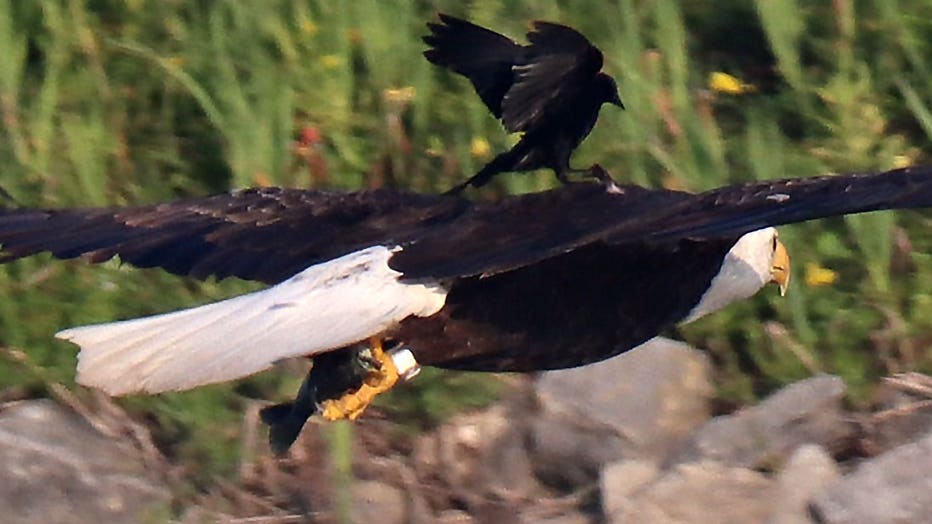 Combs’ bald eagle photography has been shared by state environmental authorities in the past, including on the Fourth of July, when the NYSDEC shared one of his photos showing a bald eagle on a branch with an American flag over its shoulder.

In addition to the NYSDEC photo, Combs captured several more images at the scene – and they show more of the action as the smaller bird swooped down and balanced itself on the eagle’s back.

“Now here is something you don’t see every day (never),” Combs wrote on his Facebook page.

Bald eagle populations are recovering around the country, decades after they were placed on the endangered species list due to habitat destruction, poaching and the contamination of their food supply with chemicals and pesticides, according to the U.S. Fish and Wildlife Service.

Ohio authorities announced earlier this year that the bald eagle population there has soared by 151 percent since the last statewide headcount eight years ago.

In Massachusetts, wildlife authorities said in May that a bald eagle nest had been documented with eggs on Cape Cod for the first time in 115 years.

And the Arizona Game and Fish Department shared what it said were the first known photos of bald eagles nesting within the arms of a saguaro cactus taken in the state -- a scene that hadn’t been documented with pictures since 1937.

Wildlife authorities have said birdwatchers should observe eagles from at least 100 yards away.