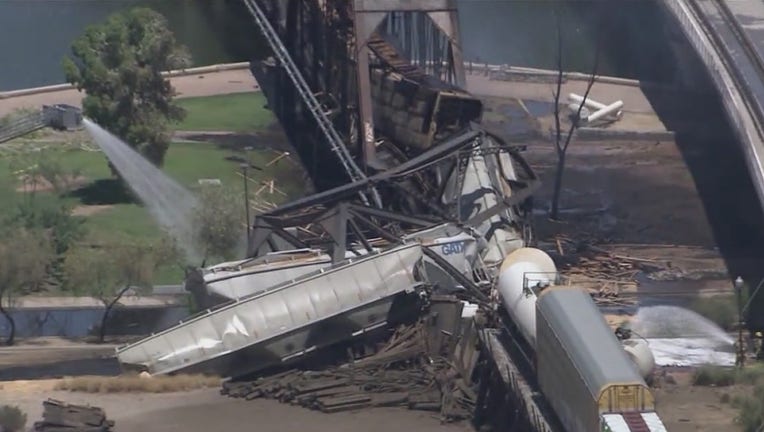 PHOENIX (AP) - A state regulatory panel on Aug. 13 approved Union Pacific Corp.’s revised plan to rebuild part of a century-old railroad bridge that was damaged in a train derailment and resulting fire.

Some of the derailed cars carrying lumber and other cargo caught fire, causing the south end of the bridge to partially collapse.

UP satisfied safety concerns of the commission and Arizona Public Service Co. by eliminating a planned piling in the parkway’s median to support the bridge. Instead, the company will install a prefabricated bridge span over the entire four-lane parkway, the commission said.

APS has high-voltage facilities near the damaged bridge.

The bridge is part of a spur route off UP’s California-to-Texas main line across southern Arizona, and the railroad said it needed to reconstruct the bridge to restore service to metro Phoenix.

Since the derailment, UP has routed some of its freight trains into metro Phoenix by using a Burlington Northern Santa Fe branch line that connects with the competing railroad’s main line across northern Arizona.

The railroad will pay for reconstructing the bridge and the damaged parkway, the commission said.

Cause of the derailment remains under investigation by the National Transportation Safety Board.

Days after a derailment and fire on a rail bridge over Tempe Town Lake caught the eyes of the world, Tempe officials are talking about what lies ahead in terms of repair efforts.