Drivers in Tempe are going to see some street closures as work begins on the first new roundabouts in the East Valley city. FOX 10's Danielle Miller reports.

TEMPE, Ariz. - Drivers in Tempe are going to see some changes out on the roads, as well as some street closures, as crews get ready to add two new roundabouts in the city.

Monday was day one of construction for the East Valley city's first roundabout, which will be located at the intersection of Rio Salado Parkway and Ash Avenue.

"A roundabout is a new type of intersection for this area," said Tempe City Engineer Julian Dresang. "Historically, it's been a signalized intersection, but we're excited about this new improvement. We think that it's really gonna help improve the efficiency of how the intersection works."

According to city officials, the new traffic configuration will create access in all directions, improve connectivity and help with the flow of traffic. 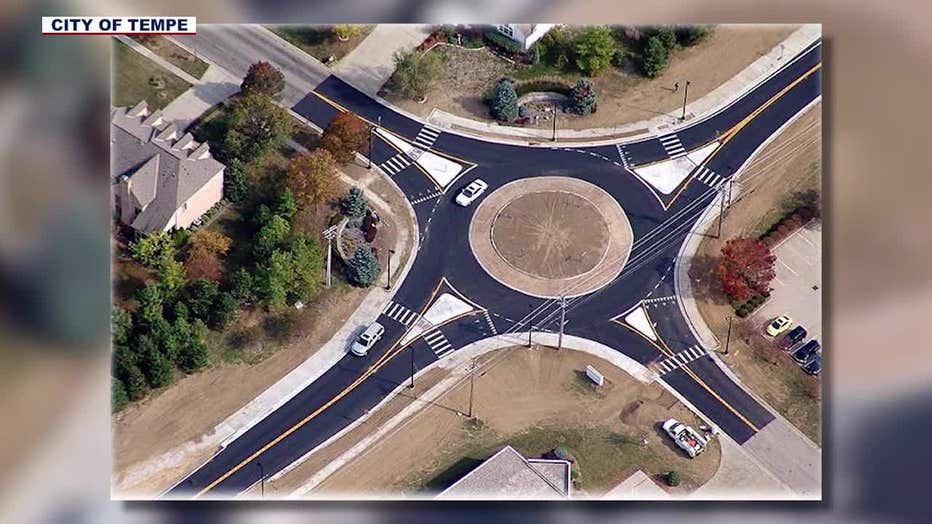 "Roundabouts really fit in nicely with our 'Vision Zero' program, which is to reduce fatal or serious injury crashes in the City of Tempe," said Dresang. "By having a roundabout, you're taking away some of the conflicts that can lead to those serious injuries, so primarily left turns. so a lot of times, what we see is this kind of t-bone crashes at those standard intersections. So, with a roundabout, people are always moving around intersections to the left, and you get rid of those conflicts."

The area will also include a landscaped gateway for bikes and pedestrians. People who drive and work in the area are happy about the new addition.

"I like seeing the investment that Tempe is putting into their city and putting into public transportation. I think that's all gonna be great," said one woman.