UVALDE, Texas - A damning report and hours of body camera footage further laid bare the chaotic response to a mass shooting at a Uvalde elementary school, where hundreds of law enforcement officers massed but then waited to confront the gunman even after a child trapped with the shooter called 911.

The findings of an investigative committee released Sunday were the first to criticize both state and federal law enforcement, and not just local authorities in the South Texas city for the bewildering inaction by heavily armed officers as a gunman fired inside two adjoining fourth-grade classrooms at Robb Elementary School, killing 19 students and two teachers.

Footage from city police officers' body cameras made public hours later only further emphasized the failures — and fueled the anger and frustration of relatives of the victims.

"It’s disgusting. Disgusting," said Michael Brown, whose 9-year-old son was in the school's cafeteria on the day of the shooting and survived. "They’re cowards."

Nearly 400 law enforcement officials rushed to the school, but "egregiously poor decision making" resulted in more than an hour of chaos before the gunman was finally confronted and killed, according to the report written by an investigative committee from the Texas House of Representatives.

Together, the report and more than three hours of newly released body camera footage from the May 24 tragedy amounted to the fullest account to date of one of the worst school shootings in U.S. history.

"At Robb Elementary, law enforcement responders failed to adhere to their active shooter training, and they failed to prioritize saving innocent lives over their own safety," the report said. 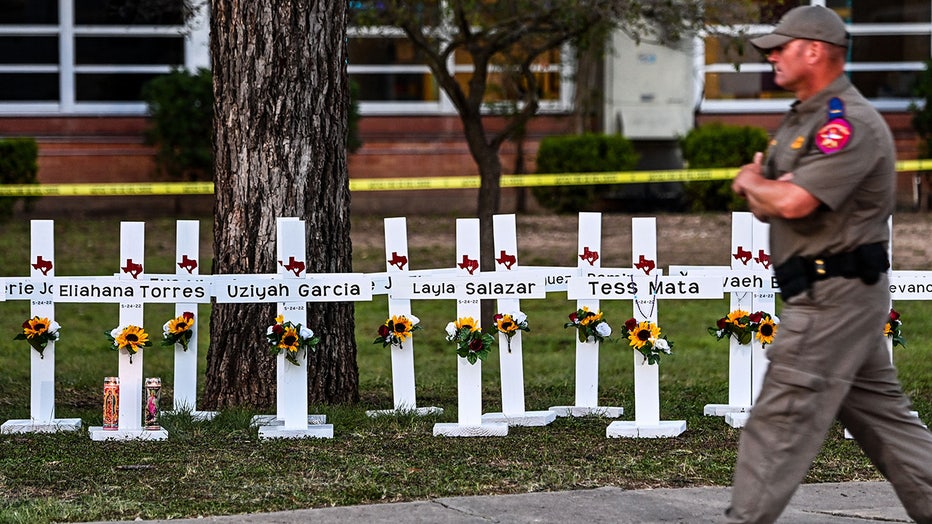 Police officers walk past a makeshift memorial for the shooting victims at Robb Elementary School in Uvalde, Texas, on May 26, 2022. (Photo by CHANDAN KHANNA/AFP via Getty Images)

The gunman fired approximately 142 rounds inside the building — and it is "almost certain" that at least 100 shots came before any officer entered, according to the report, which laid out numerous failures. Among them:

— No one assumed command despite scores of officers being on the scene.

— The commander of a Border Patrol tactical team waited for a bulletproof shield and working master key for a door to the classrooms that may have not even been needed, before entering.

— A Uvalde Police Department officer said he heard about 911 calls that had come from inside the rooms, and that his understanding was the officers on one side of the building knew there were victims trapped inside. Still, no one tried to breach the classroom.

Portions of surveillance footage of the Robb Elementary School shooting were first published by the Austin American-Statesman.

The committee didn’t "receive medical evidence" to show that police storming the classrooms sooner would have saved lives, but it concluded that "it is plausible that some victims could have survived if they had not had to wait 73 additional minutes for rescue."

The findings had at least one immediate effect: Lt. Mariano Pargas, a Uvalde Police Department officer who was the city's acting police chief during the massacre, was placed on administrative leave.

Uvalde Mayor Don McLaughlin said an investigation would be launched to determine whether Pargas should have taken command of the scene. He also disclosed for the first time that some officers had left the force since the shooting but did not provide an exact number, saying it was as many as three.

PREVIOUS: Uvalde officer who drew outrage for checking phone was waiting to hear from his dying wife during shooting

Hours after the report was released, Uvalde officials separately made public for the first time hours of body camera footage from the city’s police officers who responded to the attack. It included video of several officers reacting to word from a dispatcher, roughly 30 minutes after the shooting began, that a child in the room had called 911.

Other body camera video from Uvalde Staff Sgt. Eduardo Canales, the head of the city’s SWAT team, showed the officer approaching the classrooms when gunfire rang out at 11:37 a.m.

It was 72 minutes later, at 12:50 p.m., when officers finally breached the classrooms and kill the shooter. 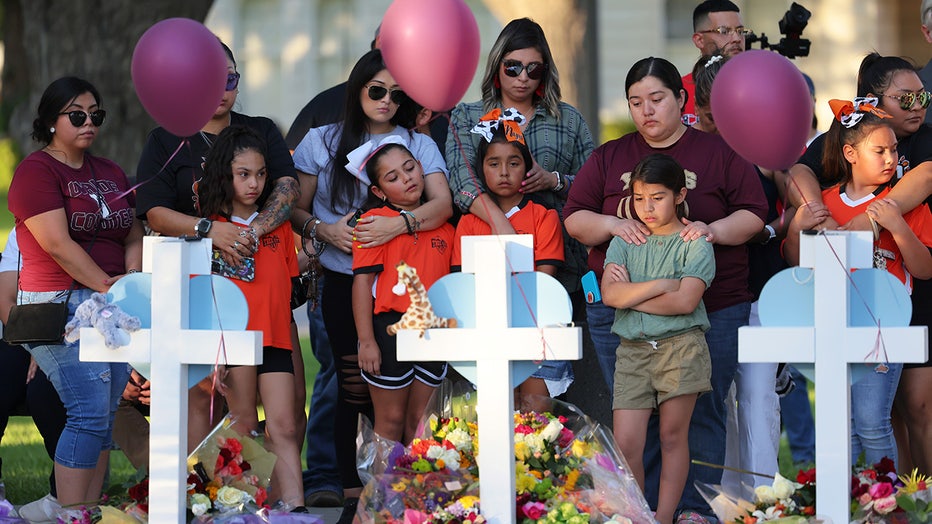 People visit memorials for victims of Tuesday's mass shooting at a Texas elementary school, in City of Uvalde Town Square on May 26, 2022 in Uvalde, Texas. (Photo by Michael M. Santiago/Getty Images)

Calls for police accountability have grown in Uvalde since the shooting.

"It’s a joke. They’re a joke. They’ve got no business wearing a badge. None of them do," Vincent Salazar, grandfather of 11-year-old Layla Salazar, who was among those killed, said Sunday.

Anger flashed in Uvalde even over how the report was rolled out: Tina Quintanilla-Taylor, whose daughter survived the shooting, shouted at the three-member Texas House committee as they left a news conference after the findings were released.

Committee members had invited families of the victims to discuss the report privately, but Quintanilla-Taylor said the committee should have taken questions from the community, not just the media.

"I’m pissed. They need to come back and give us their undivided attention," she said later. "These leaders are not leaders," she said.

According to the report, 376 law enforcement officers massed at the school. The overwhelming majority of those who responded were federal and state law enforcement. That included nearly 150 U.S. Border Patrol agents and 91 state police officials.

"Other than the attacker, the Committee did not find any ‘villains’ in the course of its investigation," the report said. "There is no one to whom we can attribute malice or ill motives. Instead, we found systemic failures and egregiously poor decision making."

The report noted that many of the hundreds of law enforcement responders who rushed to the school were better trained and equipped than the school district police — which the head of the Texas Department of Public Safety, the state police force, previously faulted for not going into the room sooner.

Law enforcement authorities had enough officers on the scene of the Uvalde school massacre to have stopped the gunman three minutes after he entered the building, the Texas public safety chief testified Tuesday, pronouncing the police response an "abject failure."

Investigators said it was not their job to determine whether officers should be held accountable, saying that decisions rested with each law enforcement agency. Prior to Sunday, only one of the hundreds of officers on the scene — Pete Arredondo, the Uvalde school district police chief — was known to have been on leave.

"Everyone who came on the scene talked about this being chaotic," said Texas state Rep. Dustin Burrows, a Republican who led the investigation.

Officials with the Texas Department of Public Safety and U.S. Border Patrol did not immediately return requests for comment Sunday.

The report followed weeks of closed-door interviews with more than 40 people, including witnesses and law enforcement who were on the scene of the shooting.

No single officer has received as much scrutiny since the shooting as Arredondo, who also resigned from his newly appointed seat on the City Council after the shooting. Arredondo told the committee he treated the shooter as a "barricaded subject," according to the report, and defended never treating the scene as an active-shooter situation because he did not have visual contact with the gunman.

Arredondo also tried to find a key for the classrooms, but no one ever checked to see if the doors were locked, according to the report.

The report criticized as "lackadaisical" the approach of the hundreds of officers who surrounded the school and said that they should have recognized that Arredondo remaining in the school without reliable communication was "inconsistent" with him being the scene commander. The report concluded that some officers waited because they relied on bad information while others "had enough information to know better."

The report was the result of one of several investigations into the shooting, including one led by the Justice Department.

Brown, the father of the 9-year-old who was in the cafeteria the day of the shooting, came to the committee’s news conference Sunday carrying signs saying, "We Want Accountability" and "Prosecute Pete Arredondo."

Brown said he has not yet read the report but already knew enough to say that police "have blood on their hands."