Smoke emanating from wildfires in the western United States and Canada made its way across the continent, reducing visibility with hazy skies as far away as New York, the National Weather Service (NWS) said. (Credit: NOAA Satellites via Storyful)

Video captured from space shows the expansiveness of the wildfires scorching the West Coast as smoke travels across the country and causes hazy skies in areas as far east as New York.

Several satellite videos shared by the National Oceanic and Atmospheric Administration and National Weather Service show a gray haze traveling over the U.S. to the east from blazes like the Bootleg Fire in Oregon, which is the largest burning wildfire in the country to date, according to the National Interagency Fire Center. 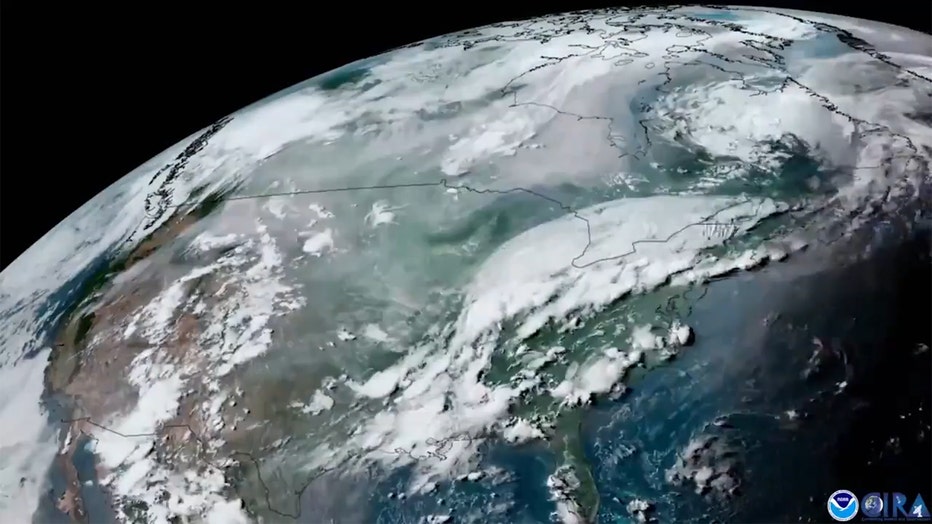 Freeze frame of satellite footage showing wildfire smoke from the west blowing towards the eastern U.S. (NOAA Satellites via Storyful)

Across 13 states, a total of 83 large fires have burned 1,293,636 acres, according to the NIFC and "more than 19,300 wildland firefighters and support personnel are assigned to incidents."

Meanwhile, the threat of thunderstorms and lightning has prompted officials in fire-ravaged Oregon to ask for help from outside the Pacific Northwest to prepare for additional blazes as many resources are already devoted to a massive forest fire.

Wildfires predominantly centered in the US west had burned some 1.29 million acres (2,021 square miles) in 13 states, federal authorities reported on July 20, with the smoke spreading across the country. (Credit: National Weather Service via Storyful)

"Although the lightning activity predicted for early this week is expected to occur east of us, we are prepared for the worst, and hoping for the best," Mike McCann, an assistant fire staff, said Monday in a statement released by the Rogue River-Siskiyou National Forest in southwest Oregon.

The worry is that dry conditions, a drought and the recent record-breaking heat wave in the region have created tinderbox conditions, so resources like fire engines are being recruited from places like Arkansas, Nevada and Alaska.

At least 2,000 homes have been evacuated at some point during the fire and another 5,000 threatened. At least 70 homes and more than 100 outbuildings have gone up in flames. Thick smoke chokes the area where residents and wildlife alike have already been dealing with months of drought and extreme heat. No one has died.

Pushed by strong winds from the southwest, the fire is spreading rapidly to the north and east, advancing toward an area that's increasingly remote.

Extremely dry conditions and heat waves tied to climate change have made wildfires harder to fight. Climate change has made the West much warmer and drier in the past 30 years and will continue to make weather more extreme and wildfires more frequent and destructive.