SCOTTSDALE, Ariz. - A suspect accused of shoplifting and a carjacking at a Walmart in Tempe is in custody tonight, but in ended in a major crash involving five vehicles. The crash happened at 68th Street and McDowell Road. The intersection was closed for several hours but is now reopen.

According to Tempe Police, just before 1 p.m., officers responded to a Walmart at 1380 W. Elliot Road regarding a shoplifting incident. Once officers arrived on the scene, a witness was able to identify a vehicle involved in the shoplifting, which officers noticed was leaving the area. When a patrol officer followed the suspected vehicle in order to conduct a vehicle stop, he noticed what appeared to be an occupant pushing someone out of the vehicle. The vehicle failed to yield to the officer and it was last seen exiting at Loop 202 and Scottsdale Road.

Another Tempe police officer noticed the car displaying erratic behavior and advised ann Tempe officers to stop attempting to stop the vehicle, Tempe dispatch advised Scottsdale PD of the vehicle which was seen heading into their city. A short time afterward, a multi-vehicle collision occurred.

Police say witnesses described a tan pickup truck driving westbound on McDowell Road at a fast speed. The truck then ran a red light and hit a silver SUV that was heading southbound on 68th St. The pickup truck then hit three other vehicles before coming to a stop.

According to police, one man and one woman got out of the truck and ran from the scene. Scottsdale officers responded and arrested the two suspects, thanks to the assistance of a Mesa Police Department helicopter. Both suspects have non-life-threatening injuries.

Police say the driver of the silver SUV has life-threatening injuries and was taken to a nearby hospital for treatment. Upon further investigation, it was determined that the occupant the officer initially observed being pushed from the vehicle was a victim of a carjacking. 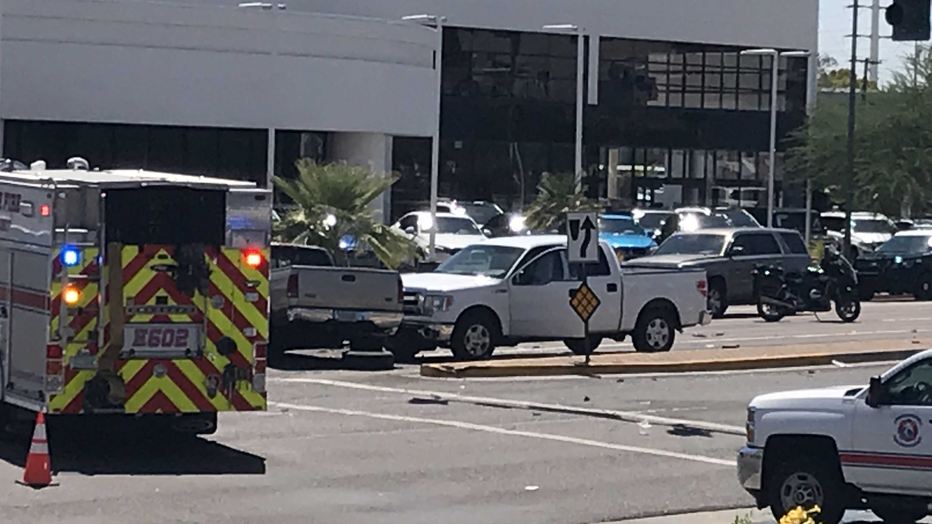